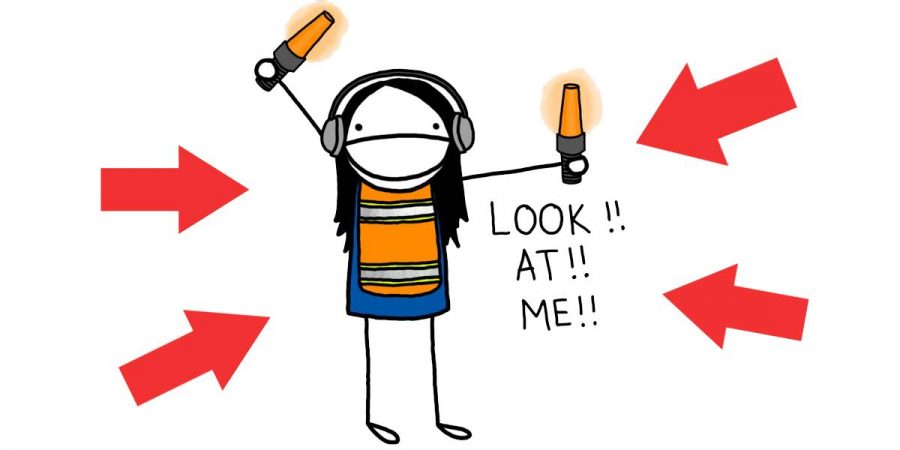 The power of social media has developed drastically over the last few years and it’s gotten to a point that many advertisers, charities and individuals have started to run out of ways to grab peoples attention. It has now come to a point where people are doing drastic things to gain notoriety online: advertisers are constantly trying to get their commercials to go viral by doing unorthodox things in them, celebrities are trying to be as controversial as they can be so that people keep talking about them and now, the example I’m going to talk about today is the individuals who just exploit others online for their own personal gains.

On Saturday, March 8th, 2014, Twitter user @princessthot has 8,000 followers. She has a pretty bland twitter page, mostly posting images of celebrities, memes and models but in just a few hours she managed to completely take over Twitter with one simple tweet. Now it’s impossible to know if what she was doing was fake or not but it managed to get the attention of Twitter users all around the world.

At 4:30 in the afternoon, @princessthot posted a picture of what looked like her father’s Paypal account balance of $23,000,000 and claimed that she was going to give away 1K to the first 10,000 people who retweeted the image. She claimed that her motivation behind it was that her father called her a whore and she wanted drain all of his money for it. 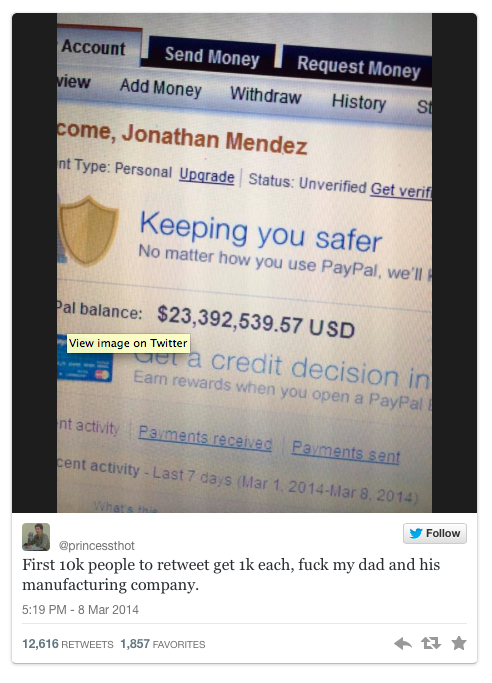 I’m sure you’re all screaming “Oh my god, this is too good to be true” but it this kind of stunt really does show how idiotic some people are online. @princessthot is the kind of person who is constantly tweeted just to get favourites and Retweets, her goal in life is to have celebrities follow her so that she can think she is a celebrity too. There are people like this all over the internet, people who are just dying to get RT’s and online fame, it was these kinds of people who were tweeting @princessthot back saying “thank you for the money you sent me, I can buy a macbook now” etc. These people would then earn themselves new followers because they all wanted to see if it was real, thus a vicious circle ensues.

Within two hours her self-made hashtag #AskHannahForCash was trending worldwide, my page was filled with people from both sides of the atlantic tweeting her and her follower count had tripled in size. She now had 23,000 people at her fingertips.

This was obviously a ploy for this teenage wannabe to gain followers but was does it say about our generation and how easily we can be manipulated? By just going through her previous tweets from days earlier you can find a lot of faults with some of the things she was talking about to her new ‘fans’. She had claimed that her father might take away her BMW for what she was doing, but only a few days earlier she was tweeting about being an a bus. The original image also showed that her fathers last name was Mendez but in a previous tweet again, she had called herself Hannah Bonet. She also refused to talk to a Buzzfeed journalist and claimed that the press are leeches who almost destroyed her family. So she defended her family, but also promised to milk their bank account dry? The Internet is a strange place, filled with stranger people.

Finally, four hours later she finally decided to call it quits and claimed that the cops cam to her house and arrested her dad. If anybody was buying this then I would like to meet them so I can personally slap them in the face. The girl has gotten what she’d wanted, a whole new bunch of followers, worldwide notoriety and a column devoted to her written by yours truly.

The internet is such a powerful tool when it comes to spreading messages across the world, this girl has exploited the greed of this generation and what they will believe just for some cash. Advertising companies are stuck on how to advertise to our generation, they just can’t crack the code of what makes us buy things. We are greedy and for the most part we couldn’t care less about others and long as number one is happy then all is well in our little world.

It’s a shame that this happened, it shows how stupid people really are, and how desperate people can be when it comes to having their own superficial spotlight. I’m ashamed that almost 12,000 people retweeted that original tweet all hoping that their PayPal accounts would be a little fatter at the end of the night. But what can we do? We are all stuck in this online prison and we can’t get out. I’ll see you all on Twitter. #RT4RT