To Delete It or Not, That Is The Question.

When you hear about something being talked about over and over, you become curious. Then you may think is it the newest fad? Is this the next big thing? That’s what happened with a small, yet extremely addicting game called ‘Flappy Bird’.

I would walk around campus and ‘Flappy Bird’ was the only thing I heard people talking about. Being the very curious person that I am, I went to the App Store and downloaded it. 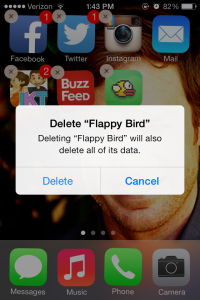 ‘Flappy Bird’ looks like a mixture of Angry Birds and Super Mario Brothers. The goal of the game is to tap the screen and guide the bird through the pipes without hitting anything. There are jokes about how this game as ruined lives.

In May 2013 ‘Flappy Bird’ was released, then early 2014 it became a huge sensation and there were over 50 million downloads in a very short time. This past weekend it all ended, as ‘Flappy Bird’ was taken off of the App Stores. Dong Nguyen (the creator) tweeted on Saturday that he was taking the app down on Sunday.

For anyone who didn’t download it may never know exactly how addicting this game really was. Me, personally? I couldn’t get in to it. I felt like it brought out all of my anger that was build up inside. Now, they say keeping that anger built up inside isn’t good, but then again if I kept this game on my phone, who knows what my phone would have looked like in the end?

Nguyen tweeted things like “I am sorry ‘Flappy Bird’ users, 22 hours from now, I will take ‘Flappy Bird’ down. I cannot take this anymore” and “It is not anything related to legal issues. I just cannot keep it anymore”. Something that is now being said is that this is all just a stunt. Is this really for publicity? 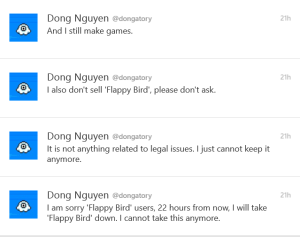 Nguyen tweeted on Saturday and stated: “I can call ‘Flappy Bird’ a success of mine. But it also ruins my simple life. So now I hate it.”

People are addicted to this game! They screen shot their scores and post it to different social media, flooding time lines and Instagram feeds. However, there does seem to be people who don’t like the game either. There have been videos such as “‘Flappy Bird’ I Hate You” and “‘Flappy Bird’ Invincibility Cheat” where the creator of the video simply shows a person how to delete the app.

The app is now off of the app stores, so someone who doesn’t already have the app is safe from downloading a ‘destructive’ game. If the creator of the game doesn’t even like the app anymore how are people so addicted? 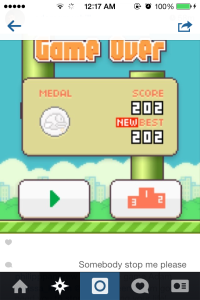 The app brought in so much revenue from ads and now its gone. Nguyen said he will continue to make games, but I personally don’t think there will be anything like ‘Flappy Bird’. Do you think he took it down for publicity? Do you think the app will ever go back up on the market?

My high score was one. I have seen people get up over 200. How long can you play this game without it ruining your phone, or worse; your ‘simple life.’