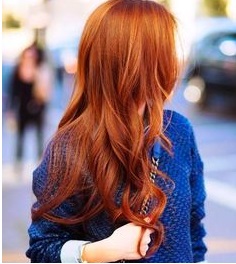 One of the things I hear every day. Oddly enough, I’m okay with it. Being a red head doesn’t go without the name calling, ginger jokes, and of course questions.

Not every red head is okay with being called a ginger, or other names for that matter, but as for me, I like Ginger, or Ginge. It doesn’t really bother me. There are other derogatory names that have come out that I don’t thoroughly enjoy, but my friends know which they can call me and what they can’t without offending me.

Growing up, I never really got teased for having red hair which I am grateful for. I was the oddball in my family because I was the only one with red hair, and I loved the attention I got from it.

Going to the grocery store, school for the first time, and even the hair salon, people would tell me how beautiful my hair was. When I was a baby, my hair was fire engine red, but as I got older it began to get lighter. A similar situation happened with my father, when he was younger his hair was lighter, and had red in it, then as he got older his hair got darker. By the time I came into the world his hair was brown and I didn’t know him with anything other than that. His mustache has red in it and it was always light, but I never picked up that that is where my red hair came from.

The sun isn’t even the main issue with my hair turning other colors, it doesn’t help but, as we get older, our hair doesn’t turn grey. Over time our hair gets lighter, but when it begins to lose its pigment, it turns to a copper-blonde, and eventually a silvery-white color.

I didn’t know that when I was younger and when it came up again recently, I decided to look up some other things about red heads. Most of these things I didn’t know, and if I, a ginger myself, didn’t know them, most other people probably wouldn’t know them either, so I decided I would share some of these facts with the rest of the world.

Natural red hair is harder to dye than other shades.

No wonder when I tried to dye the underneath of my hair a different color, it took so long to take. In high school I had this thing with bright vibrant colors in my hair, and at some point I tried to do a green. It took so long for my hair to take the green color and I couldn’t figure out why. Even now if I dye any part of my hair, there are thicker red strands that don’t take the dye as easily as the rest of my hair.

Red hair and blue eyes is the rarest combination in the world.

I don’t know have blue eyes, but I don’t see this often. It may be the rarest, but I think it is the most beautiful combination in the world.

The gene that causes red hair, which is recessive comes from the MC1R. Technically it is considered a genetic mutation (side effects may or may not include mutant powers).

Our Pain Tolerance is different than everyone else.

So that mutated MC1R gene that I just told you about? Well genetically it is connected to pain receptors. Studies have found that gingers require more anesthesia for dental or medical procedures. So those mutant powers that I was talking about, they don’t really exist, unfortunately.

Vitamin D. We produce our own.

Before when I said sunburn was just the most ridiculous thing, well, it turns out that having pale skin could be a good thing. Redheads can’s absorb sufficient Vitamin D due to low concentrations of eumelanin. The lower melanin-concentration means that gingers can cleverly produce their own Vitamin D with their body when they are exposed to low light conditions.

There are positives and negatives to being a ginger, but I embrace all of it.  I love the color of my hair and I always will. When people ask if I am a natural red head, I will gladly say yes. If people want to call me the negative names that I have already heard so many times, go for it. If you are a red head, embrace it. There aren’t many of us, so we have to stick together and show everyone else that we are proud to have red hair.