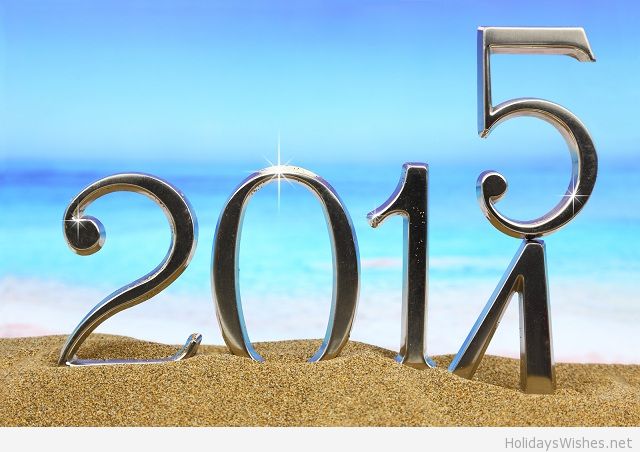 2014 was a crazy year for sure.People from 2013 stuck around and I welcomed some new, amazing people into my life. I said goodbye to some old friends, and welcomed new people into my family. I’ve cried, laughed, and laughed so hard that I’ve cried more times this year than I can remember.

In January I started my last semester of junior year, but on top of that I became a Resident Assistant. Unfortunately, it didn’t last long. I ended up resigning in the middle of February. I learned very quickly that, being an RA wasn’t for everyone. I was scared to let this go because I worked so hard for it, but in the end, I do believe that it was the best thing for me. This job helped me grow as a person more than anything else ever has. It brought me out of a shell I never thought I would crack, never mind get out of. 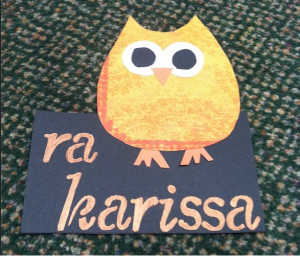 In February I turned 21. Nothing changed except for my age. I didn’t find it to be as exciting as anyone made it out to be. The expectations of turning twenty-one didn’t add up to the realities. On top of the age not turning out to be how I thought it would be, I had a real life “Sixteen Candles” moment, and my dad forgot my birthday. We talked it through, he feels horrible but, I find this to be a great topic for a story in the future.

In March, I moved in with a tiny little girl who was the complete opposite of me. She liked pink, and sparkles, and had more energy than I knew how to handle. Elizabeth Berlin became one of the best roommates I ever lived with. In March, I met someone who I never thought would change my life as much as she did. March was the beginning of a new season at Rita’s and a new season means new people to work with. Normally new people to work with gives me anxiety, but this year, one of them, Kayley, became one of my best friends. With new seasons, also comes a new “love of Ritas”. Working every day, of every week kept me busy, but in the end it gave me the ability to have money to see my favorite bands numerous times later that year. I saw We The Kings with some of the best people and spent some time in Long Island with some pretty awesome people. 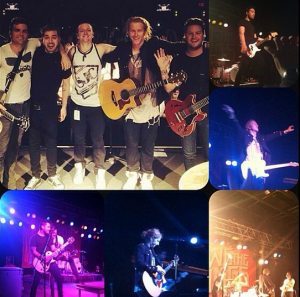 April, brought a few things that made me happy and other things that made me not so happy. My third and fourth stories were published in the school paper, and I realized I found additions to my family. Relay for Life came and went for a second year, and it was an amazing night, full of laughs, and maybe a few tears of pain from being sleep deprived. Another year of the Quill Awards came around and we got dressed up for some pictures, awards, and a great night with great people.

As another semester came to an end in May, finals were stressful. I worked every day so I had to balance my time. Kayley brought some laughs to my life as she fit into the most absurd places around the store. Cone boxes, dip boxes, behind custard machines and in mop buckets seemed to be the most entertaining. Grades came in, and for about a week, I didn’t have to worry about classes. Graduation came around right after grades came in and it was a bitter sweet moment. Some of the people I had become closest with graduated. Steph, Trisha and Smella were leaving my life to move on to bigger and better things. I was so proud of them, and at the same time I was extremely upset because I knew the next school year would be completely different. Not only did some of my best friends leave, but some new people came to Mercy, and little did I know they would become some of my favorite people. A new security company came to Mercy, and I wasn’t a fan at first. I didn’t like them, any of them really, then as time went on I got to know them and now I just want to get back to school to see them all again. 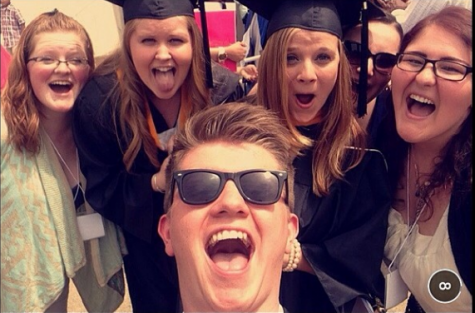 June was another month of goodbyes. Two of the best co-workers I ever worked with, left to move on to grad school and a different job, which she now seems to be happy with. I balled my eyes out in front of my other co-workers and had to excuse myself to my car where I drove away with tears streaming down my face. John Green brought even more tears to my eyes with “The Fault In Our Stars”, a book I couldn’t put down.

July seemed like a quick month. Being done with all of my classes, and finally being considered a senior in college, I could actually take some time to just relax. I still worked every day, sometimes numerous times a day, but it kept me busy. At least once a week, Kayley, Eddie and I tried to hang out, in the beginning of July, it just so happened the activity of choice was for them to try fish food. That was entertaining. Later that month, my favorite concert came around, Warped Tour. An all day festival of music and all different bands, usually ends in a long drive back from Hartford and a really bad sunburn that limits me to do nothing but stay in bed for the next three weeks. Six Flags was quite an adventure. Spending all day in lines with some of my best friends and entertaining the other guests by playing “Fire Cracker”. The Katy Perry concert was also an adventure. I was amazed by the light show, and the adventure of taking the subway for the first time freaked me out. My aunt got married, and I could officially call my uncle, “uncle”. To wrap July up, something came over me and I ran 4 miles one night just for the hell of it. 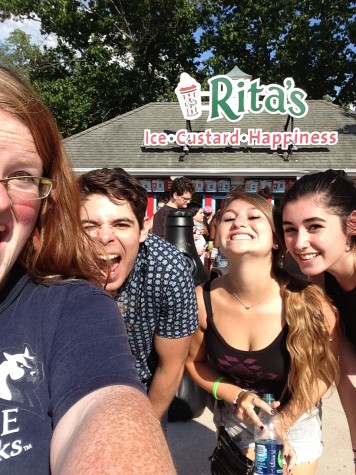 August. Oh August. Ha. Well, it started with “I didn’t choose the box life, the box life chose me”. Probably the biggest shipments we ever got at Rita’s and why not lay under the boxes, because how often can you do that. Boxes were just the beginning though, because then Kayley, Eddie and I got to work a huge event and that’s only where the day began. The sixth of August will forever be one of my favorite most memorable days of my life. After the event, we decided why waste the rest of the day sitting around doing nothing. So, Eddie had this crazy idea to move a flag to a tiny “island”. We went to five below, bought tubes and went somewhere I never thought I would be. We swam in a river, and developed a make believe thing called “sprain disease”, which was the center of our jokes for a few months. After getting out of the dirty water, and taking a much needed shower the night ended in a 4:58:54 long conversation on skype. I had to work at 9 am the next morning. I didn’t have much sleep that night and the next day I the most work I had to do all summer. 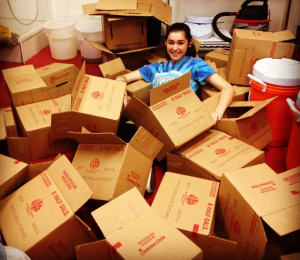 September was the month I had been dreading all summer. The month when everyone moves back to campus, but then there was the upside to September. It was the month when I could play “Mail Tetris” again. The Impact got a space of their own, where we could run a full news room without sitting in a tiny closet to type anything on our 2 working computers. September was also the month of the “cartwheel champion” when my newspaper advisor, Perrota, thought he was the best at cartwheels. He didn’t prove that he was the best, but he proved that he could do one. The news room became my new home quickly. My best friend turned 21, I got a new tattoo in memory of my grandmother, and then the month was over. 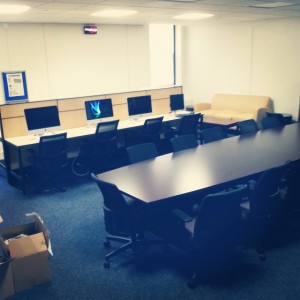 October came and went as well. We celebrated Perrota’s birthday, officially making him old, and the first edition came out with me being an editor. We made coasters for the lab out of tiles, and newspaper, they came out much more amazing than I ever thought they would. The new Childish Gambino album came out and I fell in love with it. I bought a plane ticket to see my dad in December and I got my windows tinted after years of wanting them done. Thanks to Osmar who hooked me up with a guy to get them done for cheaper, and Jay for driving me down there, my car is now “fire” as Jay says. 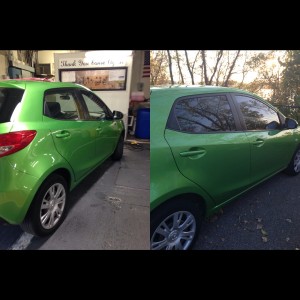 In November I was told that as soon as I registered for my Internship credits I was all set to graduate in May of 2015. I took one of the best selfies I thought I could ever take, and I went home for more than a couple hours for the first time in months for Thanksgiving. I worked my last shift of the season at Rita’s and I had a huge group come in, they spent $83.85, left the store a mess, and didn’t leave a single tip. Did I mention that I worked by myself? 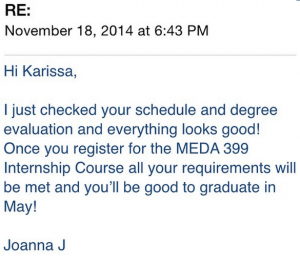 Chapter 12 of 12, December. I went to Molloy to see one of my first friends from the dorms in Legally Blonde, and it was amazing. I was able to see the tree lighting in NYC for the first time and it was mesmerizing. We were directly under the tree and I have never seen anything like it. One of my best friends turned 21 and we can now go out legally. I waited for so long for my last grades and finally when they were posted, I wasn’t completely disappointed. I was actually surprised that with all of the last minute assignments I did and with how full my plate was this semester, that I still did as well as I did. 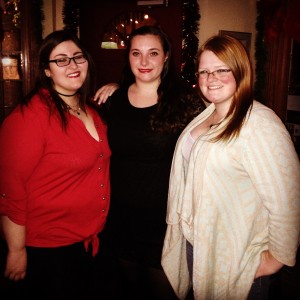 Now that my year is on paper, I realize how crazy things were and believe it or not, through the crazy, I’ve learned some things. Virgil Thomson taught me to “try a thing you haven’t done three times. Once, to get over the fear of doing it. Twice, to learn how to do it. And a third time to figure out whether you like it or not.” I’m still working on getting to the second and third time for a couple things but I feel like it’s the best philosophy. It gives everything a fair chance.

2014 brought me binge watching of “Dexter”, “How I Met Your Mother” and “Gilmore Girls”, new friends, new family, and new adventures. I became addicted to some new games, learned how to curl my hair, and established that the only thing I want is a yellow umbrella. I learned that boots are just as comfy as my converse, and I know that parts of me, no matter what I have been through, don’t change. The book of 2014 may be coming to an end, but 2015 will tell just as great of a story.