Red in the Face, But Not by Choice 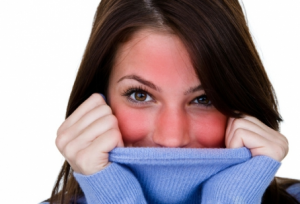 Looking in the mirror is one of the first things, people do in the morning, and it just so happens to not be one of my favorite things.Every time I look in the mirror I am reminded of the one thing that makes me most self-conscious. Sixteen million people in the U.S. are affected by Rosacea. That’s one in twenty people. I happen to be one of those one in twenty.

Rosacea is a chronic skin condition that is characterized by facial redness. Small superficial dilated blood vessels on facial skin. Depending on the subtype of Rosacea, there are different symptoms. There are four subtypes, three of which affect the skin, and one that affects the eyes.

Each subtype is characterized by different symptoms. I have one of the more minor subtypes, which I am thankful for, because I am self-conscious about it enough. Subtype 1 (Erythematotelangiectatic Rosacea) is characterized by flushing and persistent redness. At times it could also have visible blood vessels. There are times when there is burning, itching or intense burning sensations, some call them “flare ups.” There is no cure, however some people have found natural remedies and other products that can help reduce the symptoms.

For as long as I could remember my face has always been red. I’ve dealt with it my entire life, and at times I think about it more than others. It isn’t something that I talk about with people unless they ask, but even then I don’t like telling them about it. Everyone takes what I tell them differently, with some they actually get it, others it goes in one ear and right out the other.

I’ve been stared at. I’ve been made fun of. I’ve had nicknames because of it, which I embrace and then hated. As I got older, I became more aware of how I looked and it began to affect me in ways I never thought about when I was younger.

I was in the grocery store with my mom one Sunday, doing our regular shopping for the week, and I can remember people staring. I remember little children standing next to their parents or sitting in grocery carts just staring.

There was one child that I will never forget. She had blonde hair and the bluest eyes. Those tiny blue eyes stared at me, open as wide as they could be. I gave her a small smile and she lifted her tiny arm and just pointed. I couldn’t help but look away after her mother turned around to see what she was pointing at, and then the mother just stared at me.

In high school, I was Red Cheeks and at first it didn’t bother me. After a while, it began to push a few buttons. There was something about it that made me cringe, but eventually it all ended. When I walked across the stage at graduation and received my diploma, I decided to leave Red Cheeks on the high school side of the stage. That name graduated with me in June of 2011.

The name may have left me, but the memories of what happened when I was younger remain. The thoughts I have when I see people staring still happen.

When I was younger my parents told me it was something called “wind burn.” Being so young I just went along with calling it that. Then as I got older I said to myself, “How does the wind burn? I understand sunburn, but what is wind burn?”

The most recent trend is “Why are you always blushing? Just stop blushing already.”

There isn’t a day when I’m not reminded that my face is red. I have had it for 21 years, I know its red, you don’t, have to constantly remind me. Usually, my rule is, I don’t talk about it. It is a sensitive topic.

Sometimes, it’s like I feel the red. It is almost like a weight sitting on my face. It can be hard, especially when that’s all I think about. Then there are the times when I completely forget about it because I get so used to the people I am around and that they are used to it. Then I walk in front of a mirror.

There are days I stand in front of the mirror and try to imagine what I would look like without a red face, and I can never actually see it. For 21 years I have seen myself with red on my face, I can’t see it any other way, but that isn’t me saying that I still want it to be there. There are plenty of times where I find myself wishing I could take it off like a Halloween mask.

It may not be something I like to talk about, but if someone asks, I will tell them all I know. I would rather teach someone about this disease than have them judge me or anyone with Rosacea for being just a little different. Before you ask someone, “Why are you always blushing?” or make some kind of joke about someone’s face always being red, take a moment and think that it could be a sensitive topic, they may not be blushing all the time, it’s just something they can’t help. It is something they have to live with, whether they like it or not.