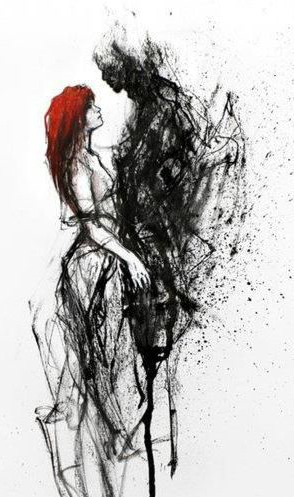 Heart beats fast. Colors and promises. How to be brave? How can I love when I’m afraid to fall? But watching you stand alone. All of my doubts suddenly goes away somehow.

All of my life I have sat here and watched people come and go from my life, most of the time not telling anyone how I feel about them. There have been a few times when I have told someone that I cared about him, and none have worked out in my favor.

Lately, something in me has changed. Not that I have been reckless, but I have been more open about my feelings. Still, nothing has really worked out in my favor.

For a while I couldn’t think about it without getting extreme anxiety. It would drive me insane, and at one point, I could very easily come across as crazy, especially from the outside.

I fell hard. Harder than I think I ever have. I went months without telling him, but I didn’t hide it. That’s how I worked, I guess. I would make it obvious after a certain amount of time.

I never in a million years would have guessed he would be my type- he was tall, not built but athletic, like a track runner. Then there was a nerdy side to him, super smart; smarter than I expected actually. It made him that much more attractive.

We became friends, very quickly actually. I got to know him, and the feelings for him became even more real. I never thought I could like someone as much as I did with him. I didn’t know what to do with all of these feelings. I never do.

The closer we became, the more convinced I was that he was into me too. I don’t know why. Not many people knew everything. But from what I saw and heard, I thought he was. We would spend most of the time together bickering back and forth, mostly about nonsense. It’s not even like it was bickering. It was just him busting my stones, and vice versa.

Eventually I decided it was time to get my life together and tell him. I have this thing where, once I tell someone how I feel, I can move on easier if they don’t feel the same way. When I told him, he already knew; which I expected. There were some points where I made it completely obvious.

I put myself on an emotional roller coaster, and I didn’t know if it was ever going to stop.

I think out of all the reactions I imagined him having, not saying anything wasn’t the one. He said he knew, and that’s pretty much it. I knew how I felt, and clearly he didn’t feel the same way. At this point, I was used to his rejection. Things settled, we got used to the fact that everything was out in the open, but I realized that losing his friendship was more heart-wrenching than the actual rejection.

I began to question my judgement. Normally, I don’t think that they like me back. Normally its always, ‘I know they don’t, but I am going to tell them just so I can move on.’ I spent weeks trying to figure out where I went wrong. Where did I get all of these ideas from? Wherever they were coming from, it made me crazy.

My self-esteem seemed lower than it ever has been. Something about him made me different. I’ve had plenty of heartbreaks in my life, but there was something about this one that was different, and I felt some type of way after this rejection. This led me to fall into this small hole that I felt like I kept getting deeper in. I isolated myself. I didn’t want to see anyone, and I put on a mask to get through the day. No one knew how I felt. No one knew that I was struggling, but I just pushed through.

I’ve been thinking a lot lately, not so much about this because I have had some time not to think about it. We are still ‘friends’ I guess, but things aren’t the same as they used to be. Time was taken between us, and it helped me move on. I realized that I will always have a place in my heart for him, but I have come to a point where I can see him talk to other people and be okay with it. I have come to a point where I can talk to other people as well. In fact it all happened in perfect timing because I met someone a couple weeks ago that I would very much like to continue talking to.

Except this time is going to be different. I don’t know much about him now, but I’m hoping I can change that. I don’t want to have things go the same way they have for me in the past. This rejection and heartbreak has taught me not to hold in my feelings until they are “out of control” so to speak. Just because things haven’t always gone my way, doesn’t mean they can’t at some point in the future.

“When I look back on my life, I see pain, mistakes and heart ache. When I look in the mirror I see strength, learned lessons and pride in myself.”