No rep. or bad rep.- All the same to Mercy College 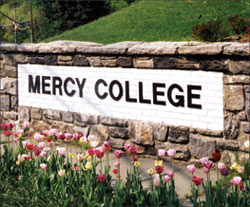 I think Mercy College thinks that any reputation they have is bad reputation.

I have only been working for The Impact since last semester and already I have gotten denied of more interviews than I would ever think of.

I have tried to interview players, coaches, officials and so many more people at Mercy College that have not wanted to speak to me or that thought it would be better to give no comment.

Writing about something like the new purchase of the Victory building, the booting of cars, or the KKK incident that happened last semester is a story where interviews from officials at Mercy College are needed instead of just student interviews. It gets so frustrating when no one wants to comment on a big topic like the ones mentioned above.

Wouldn’t it be better to stick up for the school as a whole instead of giving no comment or not replying? When I read an article that mentions that someone refused to comment after several attempts of contact, it seems like that person is guilty of something.

This is going back to the KKK incident in the Fall semester of 2012. If the coaches, students, or directors would’ve just answered questions with the intention of sticking up for themselves and not making themselves look guilty, it would’ve looked better on their part instead of giving no answer.

I’m speaking for myself, but I know others reporters have felt the same way  at The Impact; we don’t want to throw anyone under the metaphorical bus. We don’t try to get anyone in trouble; we try to do our job which is to get the story across to the students of Mercy College.

When something goes wrong on campus – we don’t blame the school. Instead, we judge the school on how it responds. Make us feel safe. Let us know everything is OK.

Many people don’t know what is going on around campus because no one at Mercy really thinks they should spread the word about anything that is going on.  I personally believe the purchase of Victory is a great investment and I am looking forward to watch Mercy College expand in many different ways.

When asking students for their opinion on the new purchase of Victory or on any other topic that has been going on around Mercy, many people don’t know what I am talking about because they weren’t aware of these things.

If Mercy College doesn’t want any reputation then they should start talking before they get bad reputation. I know I can’t be the only one that thinks of these things. Simple questions I always wonder about like how can we afford a new bookstore, a new elevator in the dorms, new turf and a 7 million dollar building all in less than two years.What’s the grand plan? Where are we headed?

But no one gives answers; then when people find out that there are no answers that are given, they begin to wonder even more.

STUDENTS! This is your campus. This is where you spend your money and this is where a lot of you live. Get involved and learn about what is going on in Mercy. People in this school might not want to talk about certain things, but  don’t let that stop you from asking questions. We have a voice. Let them hear it.

I have had an ongoing problem with work study for the past two years. Mercy says it can’t put me on work study because there isn’t enough money in the budget but they have enough to buy new property and build new elevators.

That is the only thing that bothers me; if Mercy would just give me answers and build themselves a positive reputation instead of no reputation then maybe myself (and many other people that are probably in my position) wouldn’t have a reason to feed the bad reputation of secrecy.