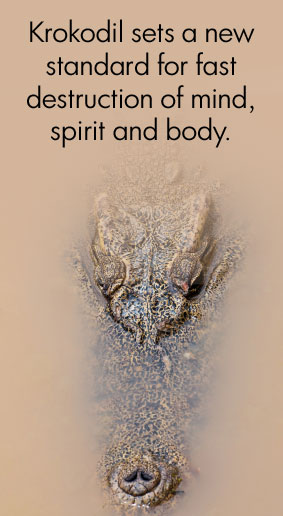 After writing a huge story on Molly, I decided to look into different and more interesting drugs.

A couple of non-American drugs stood out to me but the worst of them all was Krokodil.

Krokodil is a wide spreading and highly used drug in Russia. The poverty in Russia as well as the addiction to heroin makes a want for a cheaper version which is Krokodil.

“Krokodil” is a street version of the drug desomorphine. It is a toxic mix of codeine, iodine, and red phosphorus that produces a high similar to that of heroin, but much shorter.

This drug is literally a flesh eating drug that leads your skin to have flaky green patchs, resembling a crocodile.

The drug first came around in the Siberian region of Russia around 2002 and quickly spread throughout the country. According to the Banner Good Samaritan Poison & Drug Information Center, two cases of Krokodil abuse were discovered in Arizona in October already.

Krokodil is one of those nightmare drugs that people don’t ever think about doing or trying. Krokodil is much worse than any drug I have ever seen and now its popping his ugly head up in America. (Thanks Russia!)… Even though the drug has had a wide spread throughout Russia, desomorphine originated in America but there aren’t any cases where it has popped up.

According to CBS Arizona, these are the one two cases in America thus far but it won’t end there. It is a lot cheaper than heroin so more addicts would want to give it a try.

Most addicts aren’t educated on the drug they are taking, though heroin has a huge toll on the brain and the inner body but krokodil has a toll physically. Some images that have been seen are disgusting and very gory.

Dr. Frank LoVecchio, the co-medical director at Banner’s Poison Control Center, shares his worry-filled opinion “Where there is smoke there is fire, and we’re afraid there are going to be more and more cases,” he said.

I completely agree, everything spreads whether it be diseases or drug use, it is going to spread all over.

Watch out for this drug, there will be an epidemic and the United States won’t know what to do with itself.

I’ve been reading on this topic for weeks now and some people are saying to legalize heroin so there is less of a chance to use krokodil but that doesn’t sound like a promising or positive idea at all.

If marijuana isn’t legalized and the drinking age in plenty of states is still 21, heroin is NOT going to be legalized. (Sorry about it)

Krokodil lasts up to an hour and a half but it four times cheaper than heroin and is apparently becoming more and more easily accessible.

Look out for this drug! After watching videos and looking at some images, I wish I would’ve never found out about krokodil. It is repulsive and a wrecking ball for the body.

Not much can be said about this drug, pictures are worth a million words. I could go on for hours telling everyone how bad this is for them and why they shouldn’t do it, but I rather everyone look for themselves.

There are actual pictures and videos that can be viewed through buzzfeed.com. WARNING! THESE IMAGES ARE GRAPHIC.