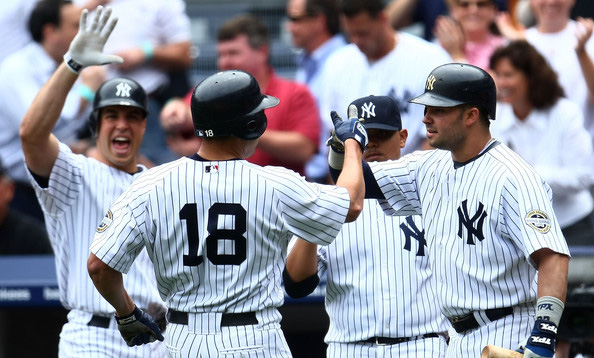 The New York Yankees are the Major League Baseball team with the most World Series championship victories. Their record for the World Series is 27-40.

Those 27 championships were won between 1923 and 2009. Hopefully, this year they can make it 28. With the Yankees playing against the Tampa Bay Rays in the American League Division Series, eliminating the Cleveland Indians from the wild card last week, I am confident that they will go on to win another World Series championship game.

I have been a Yankee fan pretty much all my life. My favorite player of all time is Jorge Posada, but right now, I’m rooting for Gary Sanchez. Sanchez is now the catcher for the Yankees. Back in his day, Posada was the catcher.

I got to meet Sanchez about three years ago. He is from the Dominican Republic and he travels with an interpreter because he speaks Spanish and his English is not that great.

I got him to sign a baseball for me. I have it on a shelf in my bedroom. I never got to meet Posada, but I hope one day I can.

My favorite pitcher of all time is Mariano Rivera. He has two nicknames that Yankee fans call him: “Mo” and “Sandman.” He was recently inducted into the National Baseball Hall of Fame and was the first one to be unanimously inducted.

There were 2 stadiums that the Yankees called home. One was torn down so a new one was built in its place.

The old one was where they won their championships. They were both in the same area, which happens to be in the Bronx, New York – my hometown.

Now, the manager of the team, Aaron Boone, was actually once a Yankee player himself. He’s the man who got the Yankees into the 2003 World Series. The Yankees lost that series to the Philadelphia Phillies.

The only remaining veteran on this year’s Yankee team is Brett Gardner. All of the other veterans have retired.

The biggest rival to the Yankees is the Boston Red Sox. That rivalry has been going on for years and no one knows how it started.

Another obvious rivalry, though not as extreme as the Red Sox one, is the one that exists between the Yankees and the New York Mets. Since the Mets play in Queens and the Yankees play in the Bronx, it’s more of an in-state rivalry.

Every year, typically during the summer (except this year because of COVID-19), the Yankees and Mets play a series called the “Subway Series.” A Subway Series consists of four games: two played over at Citi Field – home of the Mets, and two in Yankee Stadium. The Subway Series got its name because every venue for such games, past and present, has been accessible by the New York City Subway.

Once, in the year 2000, the Yankees and Mets played against each other in the World Series. That was the biggest Subway Series in baseball.

A few years ago, I went to my first playoff game at Yankee Stadium. It was the American League Division Series against the Indians, and I went with a couple of friends.

Most of my family are Yankees fans so I’m glad I get to share that with them. On my 18th birthday, I went and got a tattoo on my arm of the Yankee logo. It was really painful but worth it.

Baseball is just in my blood. I don’t know if that is because I am Latino and that stereotypically is true, but I really love baseball.

Ever since I was little I have loved the game of baseball and the Yankees have been my favorite team.

I even got to play in a pee-wee league of baseball when I was little. I still have the trophy that I earned at that time.

One time, for a friend of mine’s birthday, my mom, his family, and I went on a tour of Yankee Stadium right before a Yankee game. We even got to see the players warming up on the field and everything. That was really fun.

I have wanted to go to a Yankee game every year, but the tickets are so expensive especially if they’re playing the Boston Red Sox.