Eli Manning (Clearly) Isn’t a Hall of Famer. Here’s Why.

Eli's argument for Canton is a metaphor for everything wrong with the Hall of Fame. 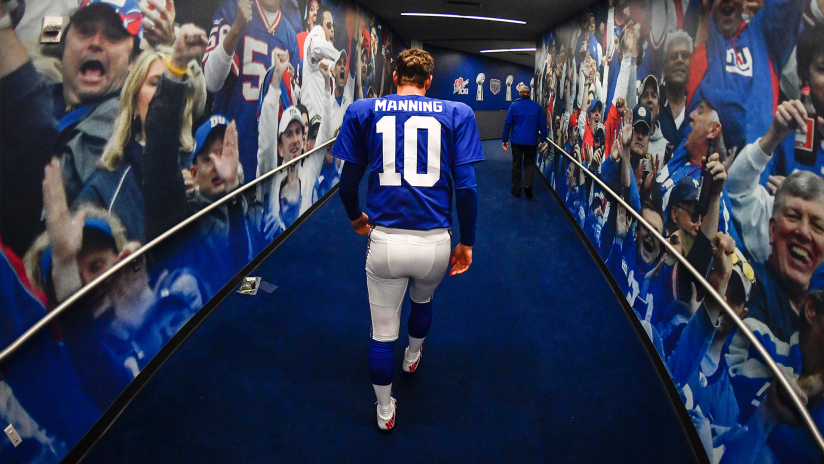 In my 20 years of life, sports have played a monumental role. Football, in particular, has always been one of my favorites. For reasons I can’t explain, I’ve always been fascinated by the game, despite the reality of it being a bunch of freak athletes giving each other brain trauma.

CTE aside, my interest in football has gotten me into many, many arguments. As a Philadelphia Eagles fan, I put a target on myself to get attacked by other fans. But in all my time of watching football, I have never witnessed the unnecessary circle-jerking of any athlete like Eli Manning.

With the news coming out that the longtime Giants Quarterback will retire, my feeds have been flooded with nothing but these cringe-worthy and annoying “tHx ElI fOr ThE mEmOrIeS!!!” messages since then.

Manning was a good QB, you could even say he was very good in his best moments, but Eli Manning has to be the most overrated athlete I have ever seen in my life.

And this is coming from someone who had to watch the Derek Jeter “R2SPECT” or however the fuck you spell it farewell tour (on a side note: Jeter has no right getting anywhere near the HOF as a unanimous candidate. This is coming from a Yankees fan, too.)

The arguments for Eli Manning getting into the Hall of Fame ride off a few narratives, which is why I was beyond thrilled to have my fellow staff members, Mikey and Ellis, “challenge” me into writing this.

Do me a favor and look at the stats I provided in the picture above (shout out to ProFootballReference.) Of the three quarterbacks listed, if you had to pick one to go play for your team, who would it be?

If you said any answer other than the blue or red QB, you’re a liar.

Hardcore Giant fans might have been able to figure out that Eli was the black quarterback, because of his mediocre 117-117 career record. Curious about the other two quarterbacks? You don’t have to look too far: Donovan McNabb and Tony Romo, two longtime rivals of Eli, who many would say aren’t Hall of Fame-worthy.

So why does Eli get a pass despite arguably having worse career numbers than both of the other quarterbacks?

He played in New York.

I purposely brought up Derek Jeter before, because he’s another tremendous example of this effect. Playing in a big market for so long has done nothing but make Eli a more popular player.

With Jeter, he has also seen his legacy benefit from the access to playing for one of the biggest teams in baseball. Eli is no different.

Not to say that POTM is the end all be all for player accolades, but for a position that gets all the credit for everything that happens to a football team (which I’ll brush further into later), to only be considered the best player over the course of a month one time says a lot.

But by playing in New York, for one of the NFL’s oldest and most historic teams, it benefited him. If Eli played in San Diego or any other small market for his career, do you believe his case of being a Hall of Fame-worthy would still be as valid? If so, do you think Philip Rivers should get in the HoF? What about Drew Bledsoe or Carson Palmer?

These are just a few guys who have career numbers similar to Eli Manning’s, but you’d sound like a moron for suggesting that either of those two should be in the Hall of Fame. But what Eli has over these players is the biggest case for his inclusion into Canton, based on what I’ve seen.

I can already predict what you’ve said, and it is something like this:

“But, but, Eli Manning single-handedly defeated Tom Brady and the New England Patriots in the Super Bowl, twice!”

Yes, the New York Giants defeated the New England Patriots twice to get Eli two Super Bowls, including the MVP award of both games.

Let me repeat that. The New York Giants defeated the New England Patriots twice to get Eli two Super Bowls.

Titles are the most overplayed narrative when talking about athletes. So many great athletes legacies have been tarnished because of their lack of getting a ring; the fact that Eli got two is undeniably the biggest factor in his Hall of Fame case (and the fact that his brother was Peyton.)

The ring argument is so fucking dumb, especially with Eli Manning. For starters, yes, Eli won the MVP in both games, but to act like Manning’s play was the sole factor for those victories is nothing but viewing those games with tinted shades because the true reason those Giants squads were successful came down to their incredible defenses. Yes, their defenses. Because believe it or not, football is a team sport.

Eli played a big role in these two games, I’d be stupid to say he wasn’t worthy of those MVPs for his late-game heroics — but to say that the Giants defense didn’t play just as big of a role in these victories is ludicrous.

It’s understandable why we view things like winning a title to a great argument for a player’s greatness: the reason you play any game is to win. The best players typically win, so we associate the people who win in the same bubble with people legendary at their respective sport. But with Eli’s greatness, it rests on his two rings.

The ring argument is more valid when comparing two legends to one another, like Michael Jordan to LeBron James; here, you have two undisputed basketball legends whose accolades are enough alone to make them HoF-worthy. Once you argue statistics, then I believe things such as Championship wins or All-Star appearances should be calculated into it.

Let’s assume the Patriots ended up winning those two Super Bowls against the Giants, what would Eli’s case be then? I know that is a big step away, but let’s use a few definite future Hall of Fame QBs in the league now with this same scenario:

Drew Brees: One of the greatest quarterbacks ever. Tremendous accuracy combined with incredible arm strength to make him one of the best passers ever.

Tom Brady: Intelligent. Able to command more out of his teammates with his high football IQ. Quick and smart decision-maker with excellent fundamental skills.

Aaron Rodgers: The most well-rounded QB ever. Great arm strength and accuracy, able to move well enough to make him a threat on the ground, and overall a smart player.

Eli, for everything he has done, doesn’t have an elite side to his game. While he could step up in crunch time, he has so many flaws that hurt him as a player: prone to turning the ball over, no real mobility, inconsistent accuracy. Eli was a good player, there’s a reason he played for so long. His durability and arm strength made him a starter in the NFL, which is more than most QBs can say.

Eli’s stats might even look pretty, but I’d argue that his inflated passing numbers result from playing in the most QB-friendly era ever, not because of his talent. Watch how far he’ll fall in these rankings the upcoming five years until his eligibility for selection into the HoF.

This is a stat from NBC Philadelphia, but I think it even further pushes my point of Eli’s statistical mediocrity, “How many of those 246 games was Eli Manning truly great? He has five career games with 300 passing yards, 3 TD passes and zero interceptions. That’s the same number as Jared Goff, who’s played 206 fewer games.”

This isn’t the Hall of Very Good, it’s the Hall of Fame, which should be reserved for the greatest and most influential players to step on the gridiron. I believe Eli Manning will get in, ultimately. He has the right narratives behind him: stopping the evil Patriots twice, coming from a football family, and playing in the biggest sports market. But once we let narratives make our determinations for us, it hurts not only the perception of the Hall of Fame, but of the sport.