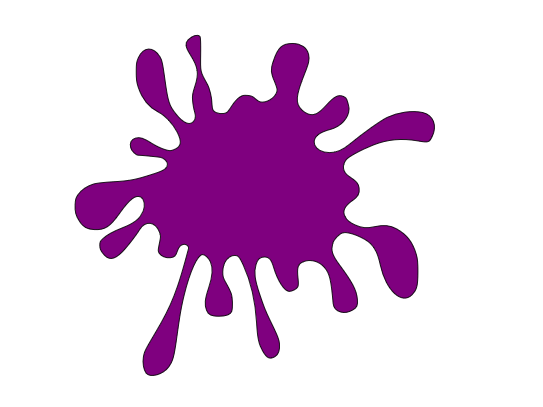 Back in the day, Nickelodean was popular for its green slime. All of us from home would imagine ourselves getting slimed. Celebrities would get slimed from the Kid’s Choice Awards to Figure It Out. That slime was used for fun and other times, for punishment. Childish isn’t it?

What if that slime was purple instead? I love purple. Purple is life. People would fight for it. Fight for something gooey, gacky and fun to play with in your hands. I can’t imagine that.

Imagine drawing an image of a blob. Something like the Nickelodean logo, but more imperfect. Many never-ending curvy lines forming in the same direction as the circles are being made.

If you can’t draw it, then imagine it as a regular flower with so many round petals. Or imagine it as Mickey Mouse’s hand, but purple. As baby hands? As pine cones? As water splashing out of a hose? As shamrocks? As a flower cookie cutter? Anything as long as its purple.

Plop! That purple slime drops onto the floor. The air slowly pushes the blob to one direction until it decides to move itself. That blob starts to grow a little taller by the minute. Then, a face appears. There are two eyes and a mouth. It has feelings. And it’s ready for battle.

He was given the name Grimer. He has too many poison abilities. The ability to touch with bacteria and not supporting plant life.

But he supports reproducing clones of himself and joining forces with only one of them to become invincible. He will do whatever it takes to get Magnemite. He has it. He smiles.

Grimer. That’s enough and I’m feeling your energy. I’m here to see your anti-living self be spoiled. Keep fighting you purple blob! I will catch you for me to survive with water.

Muk is Grimer’s father. The type who gives their children hugs when they get out of school. He is defensive just like any father figure. He makes decisions based on the intuitions of others. That is body slammin’ power. Ditto?

Ditto. The sweet baby version of Grimer who is very outgoing, free spirited and liberal. He doesn’t mind living with Grimer and others. He is a ghost.

I think Altaria told me that Ditto lives in South America with Magnemite.

What kind of ghost goes plop in South America? How is South America going to believe Ditto is a ghost when it makes a straight blank face? It lives with others and turns into them. He can run, but he cannot hide. Ditto makes it seem as if he entered into another body, just because he is a ghost. We will know that he is not a ghost because of his hilarious blank face that is not easy to change.

A ghost with a hilarious blank face? Well, there is one thing I know. His ghost is shiny. When I see Shiny Ditto, I see green. That purple blob turned green.

You know who else is green? Gulpin. He is a younger, lime-shaped version of Swalot who is another purple blob. Swalot seems like he is a big fan of Chicken Noodle Soup just like me. He even has noodles for a mustache. It rolls with anything tasty and non-tasty. Ditto?

This was the turning point when unrealistic moving objects became such a cool thing. I would double dare everyone to have fun with it by making a gunk shot when playing basketball. If I was born in 1985, I would tell everyone to open their imagination. I would ask them, “If you could be anything unreal that moves, what could you be? Ditto?”

Since 1995, I’m a big fan of blobs. Whenever I see a blob, I laugh. I can be a purple gumbi just like anybody might think. I have used a purple blob toon as my avatar in online chatrooms in the past. I would still double dare everyone to make gunk shots while playing basketball.

Blobs may sound like the most poisonous things on this Earth. I’m still the same old blob fan no matter the color, feel and movements they have. I will keep smiling and showing the love. Just like Grimer and Muk or just like the people at Nickelodean who always want to impress their viewers.

Nickelodean was known for its green slime, but their logo was orange. Yet, I want a purple blob. I still love purple blobs, purple blob toons and the purple gumbi.