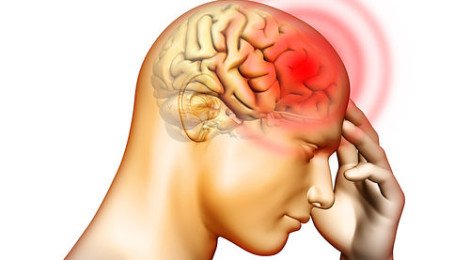 When I was a freshman in high school, I had a chronic headache for 14 months straight. Some days my headaches were, on a scale from one to ten, a five, while other days they flew off the chart at a whopping 12 and I would be lying on one of those super uncomfortable beds in the ER with an IV stuck in my arm and morphine shooting through my veins.

These headaches felt like they were never-ending. After about two to three months of nonstop headaches, I started visiting different doctors. I started with my pediatrician who tested me for Lyme disease and other possible things that could be triggering my headaches. In the meantime, I was told to make sure I get a full eight or more hours of sleep, to make sure I’m eating three full meals a day (though let’s be honest, I never need to worry about eating enough), and make sure I’m drinking TONS of water.

While I waited for the tests results to come back in the ER, I was sent for x-rays and an MRI of my brain. The MRI was the most annoying of all the tests. While having a headache, I had to lie inside a giant machine, completely still, for 45 minutes to an hour. It wouldn’t have been so treacherous if the machine hadn’t been so extremely loud and shaky. But unfortunately it was, so I went in with a headache and came out with an even worse one… Not fun.

Not fun at all.

Once that was over, my results came back and everything was negative. My doctor was shocked, so she sent me to a neurologist.

I started off with a local neurologist who seemed to think nothing was wrong with me deemed me was crazy. He was right, I am crazy, but not for the reason he thought. I did actually have chronic headaches that wouldn’t go away. Needless to say, he brushed me off and told me to stop eating certain foods, like Chinese food, because it is high in MSG (monosodium glutamate) which triggers headaches. I don’t eat Chinese food often but regardless, I gave it a try and it still didn’t cut away at the headaches. He then suggested I see an allergist, a therapist, and a chiropractor. He figured if he doesn’t see anything neurologically wrong, it may just be unknown allergies or all in my head. But like I said earlier, I’m not crazy!

So I listened to his advice and I saw all three of the recommended professionals. The allergist said I only had seasonal allergies along with basic allergies that most people have, like mold and dust. He said it could be triggering some of my headaches but not to the point where I was in so much that I was in the ER.

I then saw the therapist. I met with her three times and her diagnosis was that I’m completely normal and there are no subconscious feelings to cause stress headaches. So basically, i was starting back at square one.

The chiropractor told me my headaches may be coming from my neck because, as they looked at my x-rays, my neck was straight instead of curved. I went 3 times a week to the chiropractor and it helped for a short period of time. I would get adjusted and feel better for a few hours but then go right back to having a headache. Therefore, the chiropractor was only a temporarily relief system. Till this day, I still go to a chiropractor to help keep my neck stabilize, but I was told my neck will never fully recover to it’s normal curvature.

Next, I ended up at another neurologist. In my personal opinion, he was the best overall: Dr. Syed Nasir. When he met with me, we discussed everything that I had gone through. All the tests I had taken, and all the possibilities it could have been but wasn’t. He was definitely as shocked and baffled as everyone else, but he didn’t just brush me off as being crazy.

He had me take other forms of MRI’s such as an MRA which shows the blood vessels in my head. Of course that came back negative, too. From there, we decided to take a bigger step in testing.

I got a spinal tap.

A spinal tap, also known as a lumbar puncture, is able to do a wide variety of testing that blood tests cannot do. It can test for other forms of Lyme disease along with meningitis, and other disorders of the central nervous system, such as Guillain-Barre syndrome and multiple sclerosis or cancers of the brain or spinal cord.

It wasn’t as painful as it was said to be. I was totally awake for it and watched the entire procedure through the reflection of the mirror. It was a massive needle. Only my lower back was numbed and I felt a lot of pressure pushing into my back as they took fluid out of my spine.

After it was over, of course with my luck, my back ended up leaking from it which caused an even worse headache. It required me to get a blood transfusion which is actually more normal than it sounds. It was my own blood that was used for it. They took it right out of my arm and put it right into my back. I was awake for that part too. Normally, they put you under for it but I was hungry so I ate beforehand so they couldn’t.

And surprise surprise, the spinal tap results came back negative.

During all of these procedures, I went through from my pediatrician to the last neurologist, I tried all sorts of meds like Tylenol with codeine and Percocet. They all made me extremely sick causing me to throw up even more than I would have with my headache.

At this point there wasn’t much more Dr. Nasir could do for me. He helped me to the fullest. While all of the testing was going on, I was still in tons and tons of pain. The headaches often triggered me to throw up. Throwing up has become a normal thing for me when I get a headache. Currently, if I get a headache I immediately take Advil and lie down hoping it goes away before I throw up.

After Dr. Nasir said there wasn’t much more to do, I went to a pediatric neurologist at Phelps Memorial Hospital. The neurologist made me keep a journal of everything I did and ate from the moment I woke to the moment I fell asleep. In the end, she found nothing wrong with me and pushed me on my way.

After all of these visits, it has been a little over a year since my first headache. From the headaches, I’ve ended up in the ER about five times because of the severity of them. These headaches have yet to  officially go away.

I stopped seeing all neurologists and started seeing a concussion doctor because, plot twist: I was still playing travel soccer.

It was Thanksgiving weekend, I was at a tournament in Long Island and collided with the goalie which resulted in a serious long-lasting concussion. So of course, my headaches continued but for a different reason.

To this day, I still have headaches. They may not be everyday, but they still end up ruining fun activities for me. I have gotten much better at preventing them or dulling them down but that doesn’t mean I’m not still in pain. I have learned to live with it and smile everyday anyway. Some days I put on such a great act you’d never know I actually feel like I’m dying inside.

But I swear, I’m not crazy.