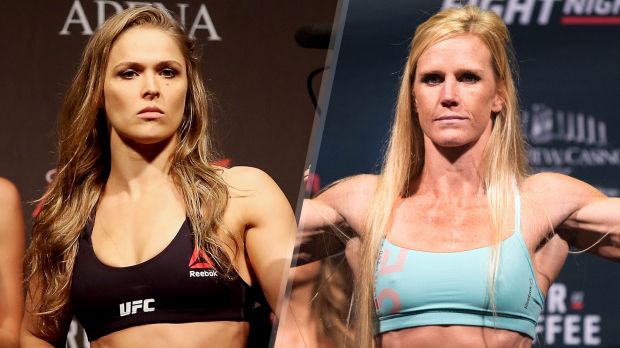 With a total of 12 undefeated MMA matches, many compared her to a young Mike Tyson. Much like Tyson, Rousey was cocky and had a reputation of running her mouth. Much like she did before the fight with Holm.

People were shocked mainly because they never expected her to lose; especially not to a competitor who was seen as inferior to Rousey, and especially not after lasting only 59 seconds in the ring.

I however, think it was just a matter of time before Rousey’s mouth caught up to her.

There’s a famous quote by a guy I don’t know and it goes like this: “Talent is God given. Be humble. Fame is man-given. Be grateful. Conceit is self-given. Be careful.”

No matter how good you are, even if it’s a proven fact that you are the best at what you do, it is always important to remain humble. Humility is something Ronda Rousey has very little understanding of.

On one occasion, Rousey took courage to another level by calling out Floyd Mayweather, saying she could beat him in a no-rules street brawl: “I think I actually make 2 to 3 times more than he does per second…so when he learns to read and write, he can text me.”

Even before the fight with Holm, Rousey made it clear multiple times that she didn’t like her and was hoping to leave Holm face down on the mat. She even went so far as to call her out in an Instagram post days before the match.

If you ask me, I think that’s just a little excessive… and quite childish.

I do understand that it’s customary before fights to drum up drama and create a rivalry, but I believe there’s a difference between healthy competitiveness and being downright rude and arrogant.

Maybe Rousey needed this fall from grace to realize that.

A re-match between Rousey and Holm is already set in place, where Holm is reportedly receiving up to 7 million dollars. You can watch the match on pay-per-view, airing January 2, 2016.