Getting Back in Shape 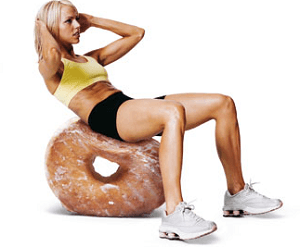 Last semester I wrote a column sharing my weight loss experience and how much it changed my life. I talked about how great I felt and how scared I was that I might fall off the wagon and gain back the weight I lost.

Fortunately, I haven’t gained any of the weight back. But to stay that I’m still in shape would be a stretch.

Although you may look at me and not think I’m out of shape, being out of shape is more than how you look. It’s how you feel too.

I don’t know what happened, I guess the Holiday season really just did a number on me because over the winter I worked out maybe once. MAYBE… which is kind of pathetic seeing as I work at a gym… but that’s beside the point.

I told myself I wasn’t going to fall victim to the winter laziness, but I did the exact opposite. I did TRY to eat healthy once in a while, but mainly I remember eating brownies and drinking hot chocolate (with extra whipped cream).

When I finally stepped on the scale at the end of winter, I was honestly so surprised that I hadn’t even gained a half a pound. So after that I’m thinking, “man, this weight loss stuff is easy! I’m still in shape after all the shit I ate.” Right?

I had my first workout back at the gym about a month ago, and I was rudely awakened. First I tried to do some cardio just so I could get it out of the way. I love running, and typically try to run about 3 miles when I’m on the treadmill, but to my surprise I was totally winded about 3 minutes into my run. But I kept with it, I only did 2 miles instead of 3, but still at least that’s something. After that I tried to do some dead lifts, only to find that I was struggling to lift the amount of weight that I usually would.

I got so frustrated that I just gave up and left. I was disappointed in my myself because I felt like I had undone all the hard work I put in, in a matter of months.

After I was done pitying myself and whining about how out of shape I was, I tried to put myself in the same mindset I was in 40 pounds ago. If I had just given up back then and decided it was too hard to get in shape, I’d never be where I am today.

So, slowly but surely, for the past month now I’ve been getting back to my usual work out routines. I can’t say I’m exactly where I’d like to be but good things come in time, and I’ve even had a few friends training with me to get me motivated.

If there’s one thing I’ve learned from this, it’s to never let yourself get discouraged in times of distress. Because that’s exactly the time you should be encouraged to work harder to achieve your goal.

Also I’ve learned that I should probably lay off the brownies and hot chocolate this next Christmas season.