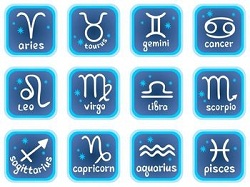 Depending on where the earth is when you’re born, your personality is influenced by 1 of 12 signs. Zodiac signs aren’t meant to be taken seriously, but surprisingly reflect on your actions and behavior, to a certain degree. Everyone is different even if you have the same Zodiac sign. These signs influence, but they don’t label you.

For example – I’m a Scorpio, which means I’m supposed to be loyal passionate and resourceful, but also jealous manipulate and suspicious. Scorpios are fiercely independent. They’re able to accomplish anything they put their minds to and they don’t give up. And they’re perfectly suited to being on their own. In fact, they prefer it because they’re not social butterflies like some other zodiac signs.

I definitely think that I identify with at least 90% of Scorpio character traits. Which is why I happen to be a firm believer in zodiac signs. Every morning I wake up, the very first thing I do is grab my phone and check my horoscope. Because it always gives me an accurate depiction of how my day is going to go.

On the other hand, someone else who’s also a Scorpio, might not fit that traits of the sign very well.  It all depends on the individual. This is usually why people dismiss zodiac signs as superstitions. Some will match their signs perfectly, while some wont. These descriptions are sometimes general and vague but for the most part, correct.

When I meet someone, one of the first things I ask is “what’s your sign?” because in my opinion, knowing someone’s sign is automatically going to tell you a lot about what kind of person they are. If they’re sensitive, controlling, trusting, defensive, obsessive, etc.

As a Scorpio, my best matches (friends, lovers, or otherwise) are Cancer, Pisces, and Virgo. So it can’t just be a coincidence that two of my best friends are Cancers, and the other two are a Pisces and a Virgo.

My worst matches are a Libra, a Leo, and a Gemini. And it just so happens that any time I’ve thought to myself “man, I hate that guy.” Later on I’ve found out they’re either a Libra, a Leo, or a Gemini. Coincidence? I think not.

Now, I’m not saying that everyone in the world is exactly like their zodiac sign. I mean you shouldn’t go around not talking to someone just because they’re a Gemini. I’ve just found that in my life, I’ve almost never come across a person who doesn’t possess at least a few traits from their sign.

Which is why I think I’m so into zodiac signs. It’s incredibly cool to me that everything we say and do can be previously determined just because of when and where we were born.