Stop Telling Me What I Should Do As a Woman

It's my face and I can smile if I want to! 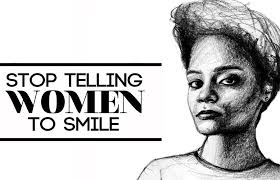 Recently, everyone has seemed to have an opinion about what we as women should and need to be doing. From the Recording Academy all the way into the White House, women have been attacked from all sides.

The music industry has seen its share of controversy over the course of the last couple of years but that doesn’t seem to stop them from making inflammatory comments about women’s role in its success. Following the outrage of the Grammys only recognizing one female artist in major categories, which coined the trending topic #GrammysSoMale, the president of the Recording Academy spoke out against the backlash.

Variety Magazine quotes Neil Portnow saying, “[They need] to step up because I think that they would be welcome.”

We should step up? I’m sorry but did you neglect to notice the female artists that did make the cut to even get nominated? Women RAN most of the nomination pools such as Best New Artist, Best Pop Solo Performance, Best R&B Performance, just to name a few.

Yet, we need to try harder?

These women busted their asses to get where they are today and still the work is far from done, clearly. It doesn’t matter that some of these artists were wrestling with their personal demons whilst trying to piece together an album that sounded remotely close to Grammy material. Kehlani was dealing with bouts of depression and held herself to such a high standard based off of her last mixtape’s success, while, Kesha was wrapped up in a heinous court battle over sexual, emotional, and physical abuse that she suffered at the hands of her former producer, Dr. Luke.  Nevertheless, according to men like Neil Portnow, that doesn’t constitute as stepping up.  As per usual, a woman’s work is disregarded by the male species.

However, in a sick twist of events, White House press secretary, Sarah Huckabee-Sanders only added fuel to the sexist fire when lending her thoughts on Nancy Pelosi. In an interview with CNN, Huckabee-Sanders gives her opinion, going as far as to say, “I think she [Nancy Pelosi] should smile a lot more often, I think the country would be better for it.”

Granted, most don’t take you seriously given whom you speak on behalf of so this wouldn’t be much of a stretch.

Maybe, she doesn’t have much of a reason to smile; after all, our lovely country seems to be going to hell in a hand basket. Pelosi has been tasked with trying to maintain the peace in an already tension-filled room in the House of Representatives. I am almost positive that it wouldn’t cross her mind to crack a smile every now and again.

Sarah, as a woman, you should understand how truly infuriating a statement like that can be. Everyone’s been there.

You’re walking down the street minding your business and suddenly a man asks, “Hey honey, let me see a smile.”

Not just no, but hell no. It is 2018 and Resting Bitch Face Syndrome is recognized nationwide. Telling women what they need to do is not only frustrating beyond measure, but has been going on for far too long. No one ever bothers to consider how it makes a woman feel when they’re ordered around. Sexist demands like that are what inhibits the growth of society. Huckabee-Sanders and Portnow are not the first ones to lend their opinions about what women should and should not be doing and they definitely won’t be the last. What’s more important is the fact that women persist regardless of what is being said.

Women are not here for your entertainment, nor are we here for you try and control. We are busy getting college degrees, becoming CEOs of our own businesses and refuse to let anything stand in our way. So the next time that you try to muster up the courage to catcall a woman on the street or tell her to smile more, think of these few pearls of wisdom.

My name isn’t Baby or Sweetheart. I am not your mother. No, I can’t give you a minute of my time because I am busy building my empire so either get with it or get lost.