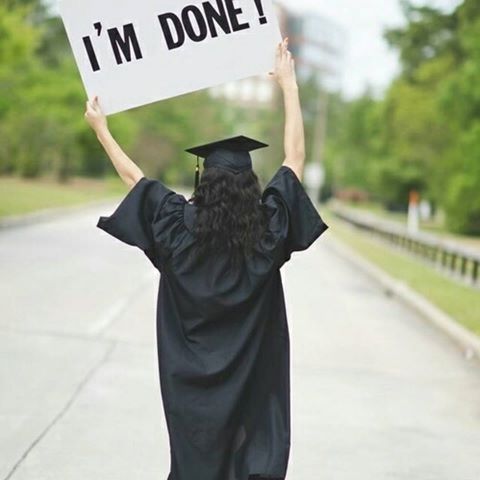 I’ve always heard that your college years are supposed to be the best four years of your life.

To be blunt, that has got to be the hottest sack of garbage if I have ever heard one.

With commencement being next week, I took the time to look back on my overall college experience and I can say that my four years in undergrad have been ones that I would have no problem with forgetting.

I stepped foot onto campus my freshman year with a plan. I would be completely reinvent myself and not be the girl that I was in high school. I would focus on my studies, not let boys cloud my judgement or take my eyes off of the prize, and my roommate and I would be super close so that I have someone to commiserate with when times got rough.

I didn’t do or get any of that.

I walked face first into a guy that would waste my time for the better half of freshman year and found myself getting wrapped up in drama that I thought that I had left behind in high school. All of my roommates came with nothing but problems and I didn’t have the time nor energy to be shouldering along with problems of my own.

Well…maybe not all of them. Brianna and Tyrane were both amazing roommates. (Hey y’all!)

As the years went by, the next roommate was more troublesome than the last and I knew for certain that I wouldn’t get what I wanted out of my roommate experiences.

I suppose I was okay with it, at least on the outside.

My college experience has been so far from how it was portrayed on television and in the movies. I would say that I want my money back but I probably owe my life and that of my first born child’s to the government in exchange for the loans that funded my four years at Mercy.

The older I got the more I felt like I was a prisoner in my own dorm room. Yes, there were all-nighters cramming for finals and plenty of ramen noodle runs to the store but there were also parties that I had to miss out on because I had to work.

I’ll catch the next party, I would always tell myself, but then the next party turned into the next one and so on and so forth. Until, I reached the second to last week of the my last semester of undergrad.

I thought that I would come into college, take classes in my course of study, and graduate with a job waiting for me on the other side.

Not only did I change my major after one semester, but the course of study that I switched to left me even more confused as I leave than when I first came in. My concentration was in radio and television production but I ended up taking classes in media concentrations across the board. Some would say that having that privilege is beneficial but I can’t say that I agree in this situation.

I would much rather have had a crap ton of experience in one specific field than have a bunch of fragmented experience in multiple arenas.

Now I am on my way out into the world (and the workforce) feeling unprepared and not entirely sure what to expect. All the more reason to shell out more money for graduate school to only pray that I measure up to some of the applicants that graduated from the bigger schools with more resources and defined programming.

As I look at my cap and gown hanging up next to my closet, one thing catches my eye.

The blue and white striped cord that I purchased to commemorate my time on the Impact.

This year (and the last three) has been riddled with highs and lows but as I look back on the things that I should have done and said, this is one thing that I can say that I honestly do not regret in the least.

The Impact has taught me things that I have taken and applied to myself as both a person and a journalist. I have grown in both areas and at times, the Impact seemed like one of the only things that was working in my favor.

Yes, there are struggles with deadlines or when your sources and interviews fall through but the staff that I have had the pleasure of working with for the last year have taught me so much that I can’t even put it into words.

My overall undergraduate experience has been one for the books and not in a good way. I have dealt with roommate drama, struggles with depression and my identity but there are also positives. I have at least a handful of people that I can call friends and creative peers and I have found myself in situations that I never imagined would be possible when I first switched my major.

Alright, let me wrap this up before I get too sappy.