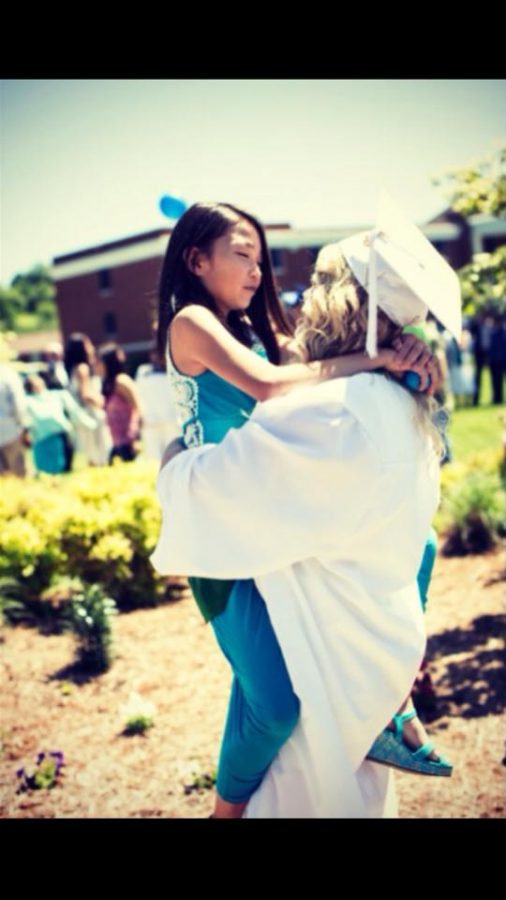 I always wanted a sister, heck even a female cousin would do. Something to balance out the amount of testosterone in my family.

I grew up with an older brother, Teddy, and two younger first cousins, Brady and Ryan.

I was maybe seven when my dream came true. My aunt and uncle traveled to China and brought back the fattest yet tiniest, shy little Asian goddess: Kiera Mei Qin.

I remember the moment I saw her. I stood there, motionless as a statue, in shock that she was actually here, officially a Griffin. As soon as my aunt, uncle and Kiera approached us at the airport, Kiera immediately held out her arms towards my brother.

It wasn’t until I was fifteen, and she was nine that we finally really connected.

For high school, I attended a boarding school in Virginia and every weekend, I stayed at my aunt and uncles house. The best part though, was that I was able to see my cousins almost every day, particularly Kiera.

I was finally going to grow closer to her.

I couldn’t tell you any specific occasion that united us together, but something did.

When I first started staying at my aunt and uncle’s house on the weekends, I would come home (I call their home my home, of course) and Ryan would already have a bed made up for me on the floor of his room but by the end of the night, he would tell me, “You can have my bed Lainey. I’ll sleep on the floor instead.” Ryan and I were always close. He always looked up to me and I loved that about him. I hoped that maybe one day Kiera would too.

I would come home and immediately throw my luggage in Kiera’s room. I would find her before anyone else and attack her with hugs and kisses, even if I had just seen her a few days ago. She would laugh and try to kick me away but I clung to her, knowing one day she would in return, cling to me.

We would stay up late at night watching Netflix movies in her bed, or lay on the floor of the lounge watching Star Wars as she fell asleep half way through.

I finally had time with her. I began noticing the small things about her like how sometimes she sleeps with her eyes cracked open, or how every time I slept in her bed with her, she had to have one of her scrawny bug-like legs touching mine.

We became inseparable, became a team against the boys and established a bond closer than sisters.

Although I had always wanted a female cousin, I never imagined it would be a mini Chinese version of me.

As I continued on through high school, we only grew closer.

One of my absolute favorite memories with that girl is my junior year, Easter morning.

Each year for Easter, my aunt would make Brady, Ryan, Kiera and I baskets filled with candy hearts, chocolate bunnies and eggs, and one year, jellybeans.

Kiera and I had just woken up and were ripping apart our baskets to see what surprises were inside.

As we found the pack of jellybeans, we decided to treat ourselves to some, except ‘some’ turned into almost the whole bag.

We made a game out of it. We took turns picking out one jellybean at a time and had to guess the flavor, and then eat the whole thing regardless of what flavor it turned out to be.

Eating the licorice, buttered popcorn, top banana, and toasted marshmallow were the hardest of them all but we loved laughing at one another’s facial expressions as we tried to chew down the nauseating beans.

From then on, we made it a tradition, having an annual jellybean contest just to re-live the good times over again.

That girl turned from my cousin to my best friend in the blink of an eye. She became my other half.

Though we had a lot of similarities such as enjoying the outdoors, playing sports, and watching Star Wars, we also began to have the same mannerisms like burping at the table or our strong sense of sarcasm.

She truly evolved into my mini-me when she started developing freckles on her face.

The closer we grew, the more I thought about how painful it would be the day I’d have to leave her. I knew this time we had wouldn’t last forever but I somehow hoped it would.

My senior year arrived and graduation came even faster.

The hardest goodbye was hers.

That was the first time I ever watched her cry. She was never much of a crier; I guess it was the tomboy in her or the fact that she hadn’t experienced much pain, but that day broke her just as much as it broke me.

I was saying all of my goodbyes and I left her last. I walked up to her slowly and my voice began to shake.

“I gotta go, Kiera. Thank you for everything these past four years. I love you so much and I’ll see you soon, okay?”

We both knew that statement probably wasn’t true since I was moving to Nebraska, but it was the only lie that could make our goodbye less excruciating.

I got down on my knees and hugged her goodbye, grasping onto her, tears streaming down my face.

To this day, she is my favorite hello and hardest goodbye. She is my cousin, my sister, and my best friend. She is my mini-me and I love her for that.

Though I don’t see her as often as I would like, I cherish our memories and think of her every day. So, thank you Kiera, for joining my family and turning into the best thing that’s ever happened to me.