Back to the 2-wheeler 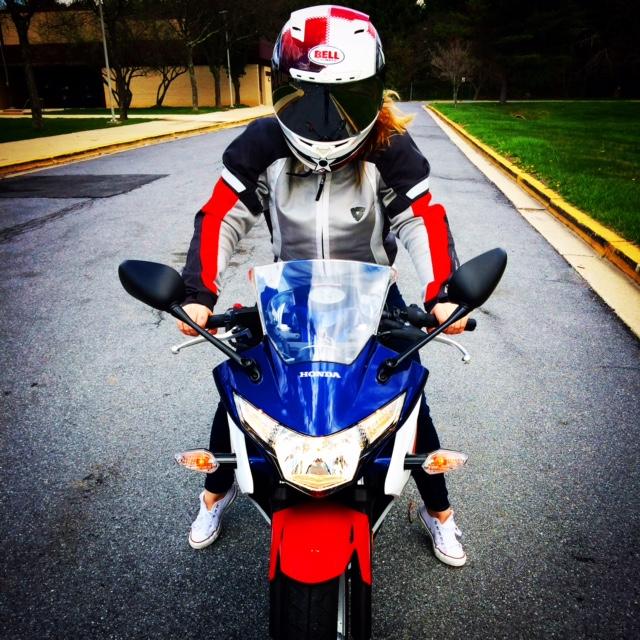 I was now starting school as a big bad kindergartener. This was the year I would learn my telephone number by heart, and even my address! (Though…I’m not going to lie, my best friend learned it before me and had to teach me).

But the most important moment of that year was when I began learning how to ride a bike. Not a 3-wheeled bike but a 2-wheeler!

My dad held onto me as I swung my leg over my new shiny bright pink bike with sparkly streamers coming out of the white handlebars.

As I sat on the tiny seat, my feet barely touched the ground but I paid no mind to my lack of height because I, Laine Griffin, was about to become the coolest kid in my class because I would be the one who knew how to ride a bike.

I mean come on.. who needs to know their phone number and address when they have a shiny bike to pimp around in? (Yea right.)

But that moment I had long awaited for arrived, I was about to take off.

My dad continued gripping onto me, not ready to let go just yet.

“Ok Lainey, now remember, once you lift your right foot up onto that pedal, you have to start pedaling immediately otherwise you will topple over.”

My right foot let off the ground and went right onto the pedal, except instead of moving forward, I immediately fell to the side and hit the pavement.

“You need to start pedaling as soon as you get those feet up.”

He helped me back up onto the bike and I sat in the same position as before, left foot on the pedal, right foot on the ground.

I let up my right foot and pedaled slowly.

Time and time again I fell. The cycle became so repetitive that I began to think I wouldn’t be able to get up.

I was beginning to give up but my dad said, “Come on Lainey, give it one more go. You can do it.”

I got back up on the bike hoping this last try would be my magical moment. His hand was gently touching my back again. I knew he wouldn’t let me fall if I just had the confidence to start pedaling as hard as I needed in order to steadily move.

I pushed down firm on the right pedal, then the left, then right.

I looked to the side but my dad wasn’t there anymore. After a moment of panic, I realized he was about seven yards behind me.

Fast-forward ten years later, when I was fifteen.

It was now time to learn how to drive a car.

My dad was sitting in the passenger seat of our Lincoln as I sat in the drivers seat in an empty church parking lot.

“Ok, so you have the gas pedal on the right side, brake on left. Reverse and drive are right here,” as he pointed to the middle section by the cup holders.

“Alright, got it,” I anxiously said.

I took the car out of park and into drive and stepped on the gas… maybe a little too hard.

“Ok ok, woah slow down!” my dad’s voice spiked up.

I slammed on the brake and we jolted forward, the seatbelts catching our accelerated force.

“Don’t just press your foot down on the gas all at once. Ease into it and slowly accelerate.”

Again, I let off the brake and pressed on the gas, slower this time.

I began moving forward at a steady pace.

It didn’t take me too long to learn to park afterwards but then there was the parallel parking which was a nightmare that came along with many fights with my dad.

But just like with the bike, I learned how to drive a car.

I decided to go back to the two-wheeler.

My dad and brother both got their motorcycle license a few years back and the more I saw them ride, the more I wanted to learn.

This past Spring Break, I told my dad I wanted him to take me out and teach me.

My mom was never much of a motorcycle person, so when my brother told her about his newest addition, she didn’t take it too well. Actually, that’s the understatement of the year. She turned into the hulk, then when the anger subsided, she cried.

But to my surprise, she reacted a little differently with me.

“Hey mom… so, dad is gonna take me out to learn how to ride the motorcycle this weekend. Just letting you know.”

You see, my theory in life is that it’s better to apologize than ask permission, so that’s what I did and it seemed to work.

Saturday afternoon came and I met my dad at an empty elementary school with the bike.

*Apparently the cool people call motorcycles “bikes” so I’m going to refer to it as a bike from now on.

He gave me the rundown.

I got onto the bike and it was like déjà vu: my feet barely touched the ground as my left foot rested on the left pedal.

My dad held onto me, his hand touching my back, not ready to let go just yet.

“Now, when you want to start up, press your foot all the way down on the left pedal and it will put you in first gear. Keep holding down on the clutch as your right hand starts up on the gas, then slowly release the clutch,” he said in one breath.

“Well ok then, this is a little harder than I was expecting it to be,” I nervously said.

I stalled out five times before I got going. This 300-pound bike was nothing like driving a 20-pound bike, that’s for sure.

But after awhile, I finally got going, moving faster and faster. My dad ran next to me for as long as he could until he couldn’t keep up with my growing speed any longer.

As I drove around for an hour with my dad now sitting on the grass watching me, I realized something. 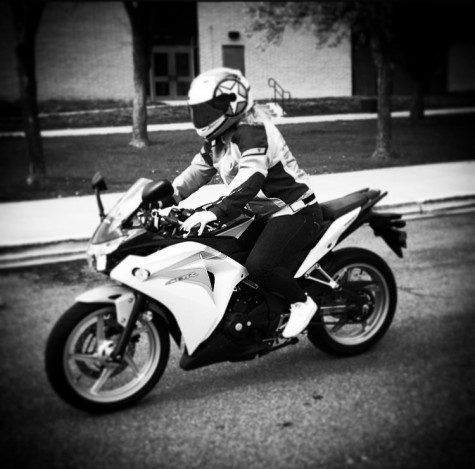