When Life Gives You… A Torn Ligament 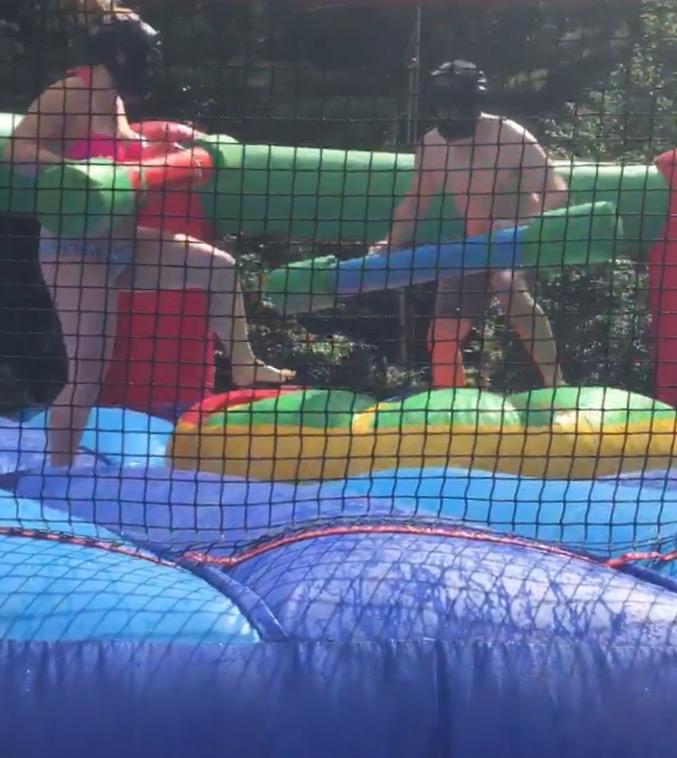 It was an indescribable feeling. To say I was in agony was a complete understatement. My leg was throbbing so hard I swore I could feel my heart beating inside it, and there was a sheer striking pain shooting up and down my leg, like I was being stabbed, electrocuted and beaten all at the same time.

It happened so fast that I didn’t even have a split second to understand what was happening to me. I never thought .5 seconds could change my life like this just had.

I laid there holding my right leg, unable to speak or move. I wanted to cry but no tears were coming out. I wanted to scream but I couldn’t utter a sound. Suddenly, I saw nothing but blackness. My mind was telling me, “It’s ok Laine, you can pass out.”

I kept my eyes wide-open, though I saw nothing but darkness.

The next ten minutes were a blur. The amnesia took over every inch of my being and the next memory I had, I was sitting on the top step of the pool soaking my knee in the cold water. It was at least twice its normal size.

After a few minutes, I built up the courage to turn my head around and look at The Hell House that just turned my life upside down, at least for the next six months.

As I looked over my shoulder, I felt a shiver run through my body. Reality was kicking in, telling me what had just happened.

That cracking sound I heard, like the sound of someone breaking a stick in half, wasn’t just in my head. That really happened.

I kept repeating everything I was thinking, like a record on repeat, hoping I would fully come to terms with reality.

I looked at her with nothing but fear in my eyes, and finally spoke.

She ran and found me four Advil and some water.

My head bobbed back and forth as I tried to stay awake.

My eyes closed for a moment or two. Or three. This was a dream. It wasn’t real, but it felt real.

I opened my eyes and I knew.

It was our summer staff party for the bar I work at.

Tony, my boss, always spoils us at his staff parties as if we are his own; his flesh and bone.

This past Christmas, he rented a party bus and took us into the city, bought us dinner and drinks.

So to no surprise, he didn’t disappoint for our summer party.

Frozen margaritas, beer, liquor, soda and pretty much every other drink you could imagine. He had catered food: hamburgers, hot dogs, grilled chicken and shrimp, steak, pasta, grilled veggies and even an ice cream truck (which clearly was the best part).

He had a pool with a diving board, 12-foot high blow up water slide, and a wrestling bouncy house, which I now and forever more will call The Hell House.

Kim’s boyfriend, Joe, agreed to come on the bouncy house with me because no one else wanted to fight the master: me.

We climbed into the house and I immediately screamed as my feet soared up into the air like a frogs’ would as it leaped from lily pad to lily pad.

I raced out of the bouncy house and grabbed a water bottle to pour around inside in hopes of cooling it down a little bit.

Marc, Tony’s son, thought it would be helpful to get the hose and hose down the entire bouncy house to cool it off.

As I scrambled back into The Hell House and poured the water bottle around, suddenly I felt a stream of water collecting around my feet into a big puddle.

I stepped to the right, trying to get to a dryer spot and immediately ate face.

That should’ve been my first clue.

But I’m not the brightest crayon in the box, so I got back up and Joe and I put on our masks and grabbed the thick dowels, now ready to brawl.

I stepped forward, taking the first jab. He immediately returned fire, hitting me straight in the gut, like a linebacker, and it was game over.

I slipped on the same puddle of water and felt the momentum of my body shift left as my right knee went… right.

It was so loud that even Joe heard it.

“Oh, she definitely broke her leg,” Tony says as everyone is laughing, thinking nothing is wrong.

He speaks up again, “Wait, no I think she tore her ACL.”

Now, no one was laughing.

I sat in Phelps Hospital, alone.

I should’ve been scared, but I wasn’t.

See, I’d already been in this situation before. More than once actually.

Last year I walked into Phelps Hospital alone and ended up having an emergency appendectomy.

A few years before that, I fell 150 feet from the sky from a parasailing accident and ended up in the hospital.

I’ve been in the hospital at least once a year since I was 15-years-old.

You could say I don’t take care of my body, but I like to think I just enjoy living life on the edge. Or maybe the world is against me. Or I could just be incredibly accident-prone.

Either way, when I tell you that every time I move from state to state: Virginia, Nebraska, Maine or New York, the first thing my dad tells me is: “Laine, this is where the nearest hospital is.”

As I got my x-ray done and was told there was no broke bone, I was relieved for a second until I remembered that I already diagnosed myself with a torn ligament, not a broken bone.

They put me in a temporary cast that went from the bottom of my calf up to the top of my thigh and set my crutches up to the right height. 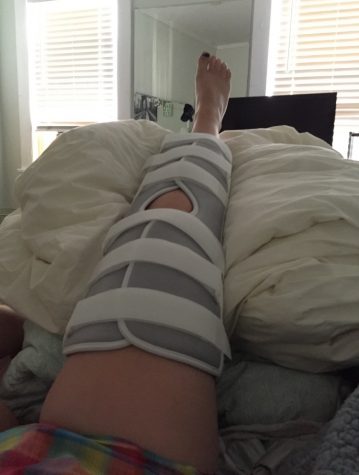 “Ok, here are your discharge papers,” the doctor says, handing me a stack of papers.

“You can tell whoever is picking you up that you’re good to go.”

“Ok… so let me call myself real quick then,” I said not realizing how sarcastic I sounded.

He just looked at me, dumbstruck. Not sure what to say, he finally said, “You shouldn’t be driving. This is your right leg and it could be severely injured. You need to get more testing.”

(Sarcasm is one of my many talents.)

The doctor realized he had no other option but to let me drive myself home so he sent me on my way.

Two days later, I was transferred home to Washington D.C.

After an orthopedic appointment and emergency MRI, I was informed of the bad news through a phone call.

“You tore your MCL.”

Every day is a tough day for me, consisting of new difficulties.

I currently am in Physical Therapy which I have twice a week for at least six weeks. They have had to hook me up to stimulation sensors that shock my muscles into working again. I will have to start up aqua therapy, and am supposed to be on crutches until I can teach my right leg to walk again. 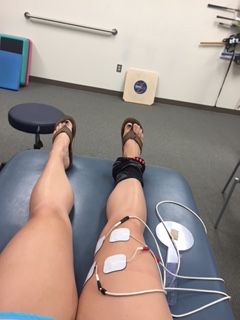 I feel like a one year old learning to walk for the first time. If you’ve ever torn a ligament in your knee, I know you can completely relate to this.

So, let’s hope I don’t tear anything before I actually reach the top.