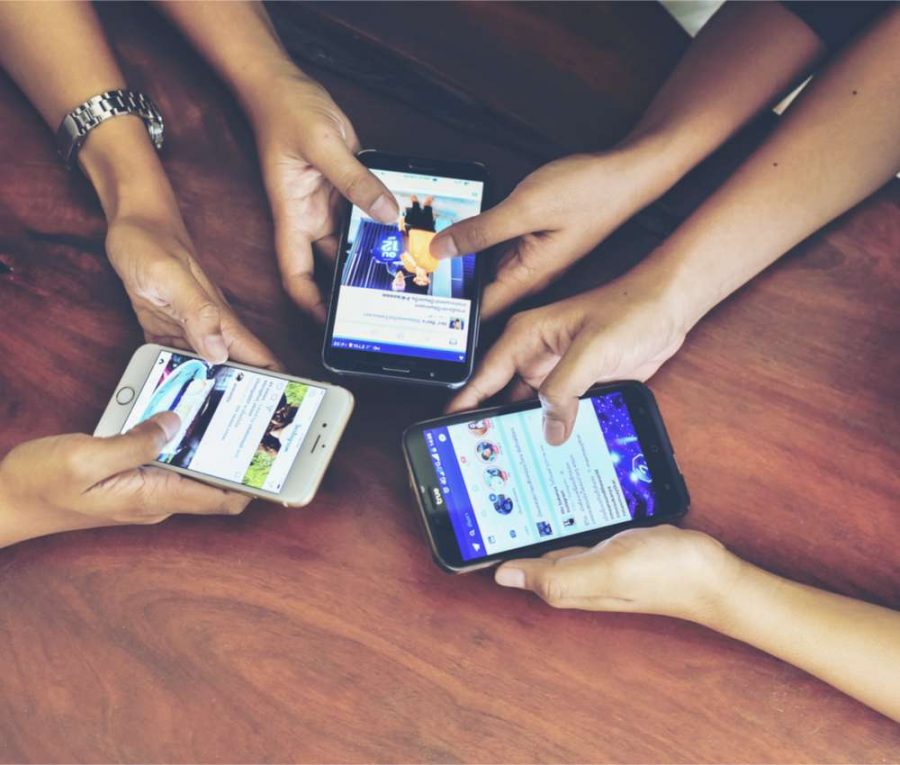 Every teenager is a member of one or more social media platforms. Whether it is Facebook, Instagram, Twitter, Snapchat or any other platform, social media forms an integral part of their lives. It’s fun to use but can later on get addicting and harmful.

It seems natural, though. Today’s youth has been born into a digital world, so it seems normal that they’re the ones to most likely adopt social media.

Many American teenagers use social media multiple times per day. Half of social media users say it distracts them from doing homework or paying attention to the people they’re with. Some teens say using social media makes them feel more popular, and more confident, which can sometimes be a positive thing. But social media can also kill one’s confidence. Back when Facebook was really popular, it helped boost my confidence, to see that people were noticing me and liking my pictures made me feel good for a while, but that confidence can be shut down because of online arguments or cyber bullying, which is a big issue today.

You would think because it made me sad most of the time I would delete my Social Media. But no matter how much I wanted to stop using it, I couldn’t get myself to stop, I would get anxious if I went for more than an hour using no social media platforms and it would always distract me from my family and school work. I also became obsessed with getting a lot of likes on my photos, if I didn’t get at least 100 likes, I would delete the photo and repost it later on in the day.

From the looks of it, Facebook isn’t as popular anymore. Teens mainly consider Snapchat and Instagram their main social-media tool now. Texting is also now the preferred form of communication, with 35 percent of teens saying that’s their favorite way to communicate, compared with in-person. Due to the increase in the time spent interacting on social media; it affects the face-to-face communication and social skills of teenagers. They can be very outspoken on social media yet more reserved for face-to-face interactions.

Many teens that use social media give out too much information. For example, about where one lives, where they go to school and other personal details, the teen could inadvertently make it easier for those who want to do them harm. I have seen firsthand people my age get brutally beat up and weapons used on them due to someone knowing their location. Nowadays they call it a “set up.” It makes it very hard for others to feel safe.

When I first started using social media I was 9, my first account ever was Myspace. (way back when it was popular.) When I turned 11, I made a Facebook account. I was still a child, so when my mother gave me permission I was only allowed to have family members. So yes, it started off innocent. As I have gotten older, I started making more friends, so that means more friends on Facebook. A bunch of adolescents using one of the biggest social media platforms at the time doesn’t sound so peachy. When I started going through that scary stage called puberty, I started to mature body wise, that alone is super scary, out of nowhere I started getting likes and friend request, I couldn’t keep up, I wasn’t aware of whose request I was accepting. Rule number one when using social media: Never accept strangers! Something I disregarded when my mother told me. I was getting random messages from men that were old enough to be my father; they were not afraid to comment on a then 15-year-old’s picture at that,

Yes, I blocked my mother from seeing most of my post so she wasn’t aware of this. Rule number two: if your parents add you on Facebook it’s probably because they want to protect you, not be in your business. (Unless they have to.) Rule number three: If you have to think twice about posting something because they may not like it. It’s probably because you shouldn’t be posting it. Another thing I completely disregarded.

Sure this was like 3 years ago and as stated above teenagers today don’t really care for Facebook. But Instagram and Snapchat, are very much related to Facebook, so it’s basically a new generation using their new generation of social media platform, repeating the same thing for me and my Facebook friends did just on another app.

Social Media can also have some positive impacts, but the negative effects of social media seem to outweigh the positive. Teenagers, and even adults, should know the negative things that come with it, when you’re not careful. It can continue to be very harmful, unless something is done about it. The power it has over people is dangerous and often goes unnoticed. It should benefit society but in today’s generation it seems to be more harmful to it.