Living With OCD And Panic Disorder 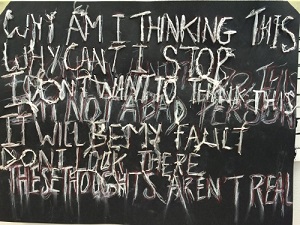 I am an aspiring Journalist, an honors student, I have dark brown eyes, curly hair, and mental illnesses that mess with my head constantly.

I have Obsessive Compulsive Disorder and Panic Disorder, which can take a toll on one’s mental wellbeing.

This is my story.

I have been living with OCD and Panic Disorder almost my whole life. I never realized it until I was old enough to understand what was happening.

Growing up, I didn’t think that my habits were unusual. It seemed normal to like even numbers more than odd numbers or to need to make things “even” or neat.

I never thought it was weird that I have to literally stop what I’m doing to fix something because it drives me crazy to see it not appear the way I think it should.

I told myself that all of these things were just quirks, and they weren’t any cause for concern.

Sometimes, when a person has OCD, any random event can trigger it and make it much more noticeable than it was before. OCD can be little things, like preferring some numbers over others, or much bigger, more debilitating things. My OCD is more of the first one. I can live a happy “normal” life with it, but it can really drive my anxiety to the next level.

Speaking of anxiety, have you ever had a panic attack? Allow me to explain what it feels like. Whenever I’m in the stage of a panic attack, I literally feel like I’m dying; like I’m going to drop dead at any moment. But that’s the thing with panic attacks, you’re not actually dying. Your anxiety is controlling your mind to make you think you are. At least that’s how I see it.

Although they are very physical in how they affect you, they are both mental disorders. You worry desperately about the next one, so you begin to avoid those situations and it becomes a self-fulfilling prophecy.

The more it happens, the more you withdraw until you can completely isolate yourself, and in this case, anxiety then sets in as well.

It happens anywhere: on the train on my way to work, outside at a park, in the shower, or even in bed.

I gasp for air and cry in pain because I don’t know what to do. The only thing I can do is try to relax and drink water. That’s what I’ve been doing for the past 17 years.

The first time I had one was when I was 5-years-old at my Kindergarten moving up ceremony. I never even got to attend it. I passed out before I could enjoy it.

The only thing I remember is feeling really hot; I felt sweat dripping down my neck, I couldn’t see how pale I was, but I could feel it.

The cool air that was hitting me felt like heat. The next thing I knew, I was passed out on the ground. All of a sudden, I woke up in bed not knowing what the hell happened.

It’s even scarier when I’m alone because no one is there to catch me if I do pass out, which only makes it worse for me because all I can think about is how I’m alone and dying.

I do what I always do: sit down on the floor, drink water, and try to relax. After about 10 more minutes in hell, I’m back to normal as if nothing happened.

At this point, I’m used to having panic attacks in public, so I now carry at least two bottles of water with me, just in case.

Sometimes I like to joke about my OCD as a way to deal with it, but I don’t think those around me understand how draining it is. I do a lot of hoarding. I’ve actually gotten better with it over the years. I’m a lot calmer now when I have to get rid of things, but I get this lingering feeling that I will need the item one day.

I’m very organized, so when I am hoarding, I do it in an organized way. I hate messes.

I like my stuff in a specific order and I know when my stuff is touched. I hate fingerprints on screens, and in school, when a teacher wouldn’t erase the board completely, I’d point it out because I wouldn’t be able to focus on the lesson if it was left there.

I can just be sitting at a friend’s house, and out of nowhere, ask myself if I unplugged my flat iron or if I locked my door before leaving my house, then I drive myself crazy.

I have hope, though. It’s important to have. Living with panic disorder or OCD all my life, I thought I couldn’t live normally; I thought I’d be miserable forever.

You can undoubtedly live a normal and productive life with these disorders. Like any chronic illness, managing this requires a focus on day-to-day coping rather than on an ultimate cure.

My coping method is writing, coloring, and drawing. Distractions can be a good thing. I live my life the way I choose to. Some days are hard, some days are easy, but I don’t want it to define me. I’m more than my mental illnesses.

I am a dark-eyed, curly-haired, honors student and future journalist. I am who I choose to be.