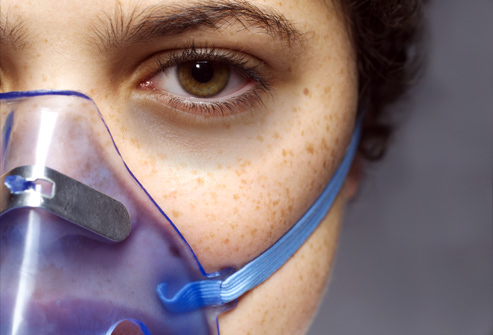 Imagine someone punching you right in the chest but instead of removing their fist, they maintain it there. That’s what someone with asthma feels when they can’t breath. It’s hard to make people understand how it feels like and even worst to explain it to them.

Asthma is a condition where people have trouble breathing. Their airways are filled with mucus which prevents air from coming in, the airways also become narrow and inflamed. It can last for a couple of years or it can last a lifetime. It can cause difficulty breathing, wheezing, chest pain and a nasty cough. The symptoms and the level of seriousness various depending on the person, so someone might have it worse than me or someone might have it less severe than me. It really depends on the person and how they can handle the situation. I consider my situation mild because I was never taken to the hospital in a emergency room when I get my asthma attacks. I have practiced my breathing skills very often; inhale deeply and exhale slowly repeat as many times until the attack is over. But there are times where I feel that I can’t control it. I feel like I’m going to pass out or even worst, like I’m dying.

Now, I know someone may say.. Andrea, it’s not that serious, stop exaggerating. Well, it is very serious and I’m not exaggerating. I don’t think many people understand that if you have a sickness that prevents you from breathing, you can die. Your lungs and airways are whats keeping you alive if it’s not working as it supposed to then it will slowly stop working and it will shut down completely. The mucus is preventing air from coming in so the mucus will pile up in the airways making it difficult to breath, we use an inhaler to help the mucus move along the airways so it’s not completely blocking the entrance for air. But inhalers only help the problem, it doesn’t solve it.

It seems that people will assume that if someone has asthma and had an inhaler then they are fine but it’s not that simple. The inhaler is just a medicine like any other, it helps you control your breathing and wheezing, it doesn’t make it disappear. Pumping a few medicine from the inhaler doesn’t make the condition go away. Take it like this, if you have a cold and you take a medicine for it, your condition will be better but the medicine won’t completely eliminate the cold. The inhaler is like that but instead it’s more sever than a cold and breathing becomes harder even when you pump in medicine from the inhaler.

I’ve been told numerous of times that “it’s not that serious” and “it will go away” from someone who doesn’t have asthma. The worst one is when they say “just breath.” As if I am not trying to do just that.  Now I can handle someone who has or has had asthma tell me that it not hat bad although it is, but from someone who doesn’t know what it’s like to have asthma and still makes you feel that you’re the problem, it hurts. Especially when its coming from a family member or a friend because you expect them to back you up, to help you and understand you.

That’s the issue I had with my family, they wouldn’t believe and still don’t know how difficult it is for me to be able to breath. I had asthma at the age of 15, I’ve had it ever since. It started sophomore year of high school when I joined the indoor track team, I was practicing to be in the outdoors track team but the season hadn’t started and the coach suggest I practiced with the indoor team so my body can get used to running. I’ve never ran before unless I’m running late and I’m trying to catch the train or bus. It was during the winter time and when I would go home from the practice, I would still be sweating and I guess I didn’t cover my chest very well. As days went by I noticed that I was beginning to feel tired and everything I did, I had to do it slow because I didn’t have the energy to do anything. It was as if someone was pulling my body and making me feel drained.

As the days were passig by, I started to get heavy mucus and I kept sneezing a lot. There were mornings where putting my shirt was already getting me tired and making me breath heavily. I started to see some changes that were happening. I couldn’t make it to a block without catching my breath. I would also to start wheeze and feel chest pains. Every step that I took was difficult, I had to constantly stop and breath heavily. Before these symptoms I knew and heard about asthma but never thoughts thought these symptoms were leading to asthma. I figured that I was never active and running indoors was part of my body reacting to it.

Weeks went by and I still hadn’t gone to the doctor to get checked. I looked up my symptoms and figured that it had to be bronchitis because there was no way I can have asthma, I’ve never had any serious sickness like that. Bronchitis is like asthma but less severe and it goes away after a few days or weeks. I complained about it to my family but they didn’t believe me when I would tell them that I had trouble breathing. I would call my mom and tell her that I couldn’t breath and she would say ” it’s because you don’t exercise” or “you’re not covering up.”  My sister would pass by me while I laid in the coach wheezing and she would say “bronchitis isn’t that bad, stop pretending.” I would ask my brother to pass me something because I felt weak to even get up and he would say that I was lazy and to just get up and get it myself. It hurt a lot that they wouldn’t believe how bad my condition was and how worst it was for me each day that passed.

Of course I cried when they would say that because they didn’t believe me and I felt that I was dying without no one to help me. I would even cry in front of them and they still didn’t believe me. I talked to the coach and told him I didn’t want to be part of the team without really telling him why. Two months passed I still didn’t get treated for what I thought was bronchitis, I knew it had to be serious then that because I was coughing out small clear mucus. I didn’t attend school for two days straight and my mom told me it was time to go to school because I can’t be all day in the house. That’s when I reached my boiling point, I yelled at my mom for not taking me to the doctor and told her that it will be her fault if I died because I am dying and she hasn’t done anything to help me. The next morning, she finally took me to the doctor who asked me to breath in and out as soon as she heard me wheezing she took me to a room where she put an oxygen mask on me. She asked why  didn’t come sooner and I just stared at my mom and she stared back at me. The doctor declared that I had asthma.

The doctor also gave me a list of the things that I was allergic to because allergies can trigger asthma. Cats had the most percentage of all the things I was allergic to. Mind you, I have two cats at home. The winter was preventing me from breathing when I was outdoors while my cats were triggering the asthma from indoors. Great, two things that couldn’t have killed me. I still have those two cats but it’s because I have an inhaler now which helps the asthma from not getting worst so I don’t have chest pains like I used to.

After years of having asthma, I have learned how to control the asthma attacks where I didn’t have to go to a hospital but it’s hard. Nothing is easy and it’s definitely not easy having a sickness that people don’t really understand. Asthma is a serious sickness just like any other. It can kill if not treated right. Listen to someone and try to put yourself in their shoes without judging and try to understanding what they are going through. Asthma should be treated seriously and shouldn’t be taken lightly.