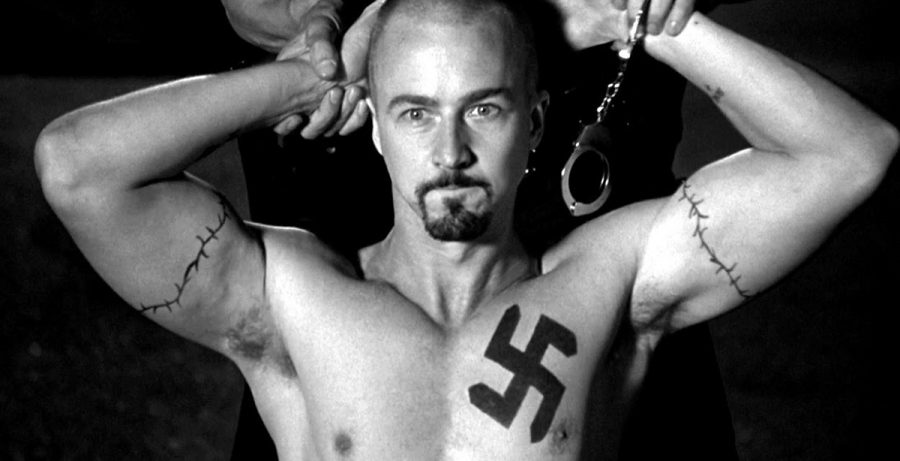 If you enjoy watching movies that cover racism, boyhood, violence, murder and realization then this movie is definitely for you. American History X is categorized as one of the best movies of all time for shedding light on topics that are not spoken much about in movies.

The movie takes turn going back and forth between the past and the present. It doesn’t go in order which makes the movie more engaging and understanding. The sequence that is portrayed in the movie fits very well with the story line because as an audience, you can understand the character’s reasons for the actions that they take.

This movie focuses on two characters, the main character Derek and his younger brother Danny. It also focuses on broader themes that not many are willing to discuss or apply in movies. The director took a great approach while filming this movie because not only does he cover aspects that needs to be talked about more often but he also potrays the movie in black and white during scenes that demonstrate violence and anger. On the other hand, with scenes that are soft and calm, the director uses color. By changing the colors of a particular scene, the audience can capture the mood and feeling of the character or the scene itself.

Besides the director’s excellent viewpoint on small details like the coloring of a scene, the screenwriters do a magnificent job at writing a truthful script. They don’t shy away from curse words that need to be used in the dialogue, and they dont overuse it to a point where the audience gets tired. They use it often for a specific character and when it is truthfully needed in specific scenes. There are scenes that are hard to watch but they are extremely relevant and too powerful not to watch.

Now that I’ve given you details on the script and the film work, let’s talk about the storyline and what the movie is about. American History X is about a young man named Derek who was once a good student with an open mind that turns into a Nazi loving, racist leader of a group of people who hate every race other than white Americans. Derek’s hate towards other race starts when his father is murdered by a black drug dealer while working on a case.

Derek goes to jail after he kills two black men trying to rob his car. In jail he learns who the real bad guys are and who aren’t. While Derek is in jail, his younger brother Danny who idolizes Derek is slowly turning like him. Not as violent as Derek but in his way to becoming him, the principal decides to guide him by having him write a paper on his brother and teaching him the history of America.

That same day, Derek returns from jail after serving three years and comes out a changed man. In jail he realized that ‘his group of people’ were working with Hispanics in order to get drugs. He was surprised that they would work along side a race that they were supposed to dislike.

Derek believes that Hispanics, especially Mexican, take white job and that blacks aren’t wanted in America. One of the people in the group rapes Derek after he questions his ways and confronts him for not staying loyal to the beliefs of racism. All that changes when he becomes friends with an black young boy who he meets while working in a laundry room in jail. The young boy tells him he is serving up to seven years in jail for ‘assaulting’ a police officer.

Okay, I’m going to stop here because I’m realizing I’m giving away the whole story but also I wanted to discuss the jail time these two man face due to their color of skin. At that moment where the young boy tells Derek the reason he is in jail and how many years he will be serving, Derek realizes that by being white it already gives him privileges that others can’t have. At that moment he understands that every other race other than white are the victims and have it far worst than whites. That scene is the breaking point because Derek’s mindset starts to change, and he is surprised to know that as a white man who KILLED two black men, he will only serve three years while the black young boy is serving seven years for running into police officers after failing to rob a store.

Let that sink in, a young black boy is sent to jail for seven years of his life trapped in a cell because he ‘assaulted’ a police officer while Derek, a white man, was sent to jail for only three years for killing two black men. This is exactly what’s happening right now in this country. Inequality. You hear it in the news, a black man gets shot for not putting his hands up in the air while a white man gets arrested without injuries while carrying a gun. When I saw that scene I was surprised at the movie twist but wasn’t shocked about it because it happens in real life.

The fact that it’s discussed in this movie is already a step forward to try to stop racism. To try to make racist people understand just how bad their mindset is. It’s a great film to show those type of people just how bad it gets for them if they don’t change their ways (not going to give away the ending.. but it’s shocking and the biggest plot twist I’ve ever seen beside Suspicious Mind.)

I think if schools show this movie to their students and discuss it with them, they can understand the bigger picture. The movie is not just about race but also about not judging a book by its cover because that’s what Derek did; he changed people based on how they looked and where they came from without trying to comprehend their personal stories.

By making the audience watch the movie through the eyes of a racist person, they can also get into their minds and figure out how they became the person they are. It shows how someone can turn into someone else in a matter of seconds, how they became a different person because of what life threw at them. The death of Derek’s father really pushed him to become the person he didn’t want to be but that’s exactly who he became.

This movie will definitely change the way someone looks at life and race. It should definitely be a must to watch if you want to learn about how to educate people at a young age about these topics they will face one day. Having this movie be shown to them can prevent them from leading the path that Derek took and I believe that can definitely help prevent people from becoming racist and helping those who already are, not be anymore as well as those who have been hurt because of racism.