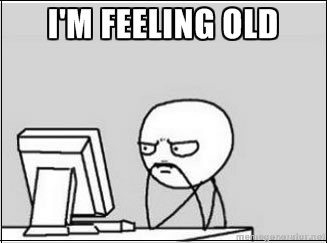 Being 20 might seem young for others but it’s actually old. Of course, anyone who is older than 30 might be thinking well, “why does a 20 year old feel old? They don’t know much about being old.” But, I do. I’m already speaking at an old level. I find myself saying “in my days” or “kids nowadays.” I’m not proud to think of myself that way but it’s true.

My mom laughs at me when I tell her this but she doesn’t understand. In her eyes, 20 is a young age because she is older. But for me, growing up seeing babies that are now teens has made me feel old. I hear these kids saying things I didn’t say at that age or I see them doing thing I didn’t do at that age.

Kids who were born in the early 2000s are already in high school and it seems that puberty never hits them like it did for us. They have all this makeup and tools they use to hide the flaws we couldn’t hide. But that’s not what makes me feel old. What makes me feel old is what my six year old cousin asked me a few weeks ago.

My little cousin came to my house and saw CDs at the bottom of the TV and asked, “what are those?” It’s not her fault that she doesn’t know, it’s nobody’s fault but it made me feel sad that something that I grew up with no longer exists or is non existent to a kid today. When I was little, VHS tapes were still around and CDs were the new thing but both are now considered old. No one uses them anymore.

I remember a place called Blockbuster, I’m sure you do too where you would pick up a VHS or a CD to watch movies at home. Now, it’s an extinct place that no one knows about. Ask any kid what this place is and they will have no clue. I used to go to Blockbuster all the time and it used to be in every corner but now it is nowhere to be found.

Toys “R” Us is on its way to becoming the next Blockbuster. It has already been announced that they will be closing every single store in the U.S. This used to be every child’s dream place. I felt joy and happiness as a kid being surrounded by endless amounts of stuffed animals, games, toys, dolls, etc. But now it’s a place that will be soon forgotten because no one buys toys for kids anymore, it’s all technology.

It’s not only the places that kids nowadays don’t know about, it’s also the way they do things differently. Back then, we used an iPod or an mp3 player to listen to music. But now its done through apps on phones that have everything. Heck, I gave my computer a virus by using LimeWire to download illegal music but these kids have Pandora or Spotify. I couldn’t call a friend during the day because it was only free after 9 p.m. I never used the internet on my phone because if I did, that bill would go off the roofs and my parents would get mad. I didn’t even get my own cell phone until the 8th grade and now I see kindergarteners with better phones than what I have right now.

It’s also the way they do things in class. When I was younger, I had to pass notes to friends in order to have a conversation with them without getting in trouble. My notebook was filled with ripped papers due to the countless notes I would pass to my friends in class. But now, it’s all done through text.

If you are caught texting, your phone gets taken away which is bad but you can still recover it at the end of the class. My embarrassment, unfortunately, could not be recovered if the teacher would catch us passing one of those notes. They would either read it or have you read it out loud to the class. It was brutal.

I also realized how different things are being done. Such as when I went to my brother’s elementary school for multicultural day. I was told to bring a plate of food that represented our culture, so I did. Then once the kids finished their presentation, they asked all the parents to leave because the food was only for the children and not for the parents.

Can you believe that? I made food for other kids to eat and I couldn’t even take a bite even though I cooked it. In my times, that was not acceptable. My sister and I went to that same school my brother is in and when it was multicultural day, every parent was allowed to bring or make food from their country and stay to eat the food that was brought in.

And don’t get me started on house rent. Back then when I was little anything that cost $1,500 was bound to be a nice place, two bedrooms with a nice kitchen and bathroom as well as closet space. Today, my mom pays rent for a small basement that costs that same amount of money. It’s insane how everything went up out of nowhere. McDonald’s doesn’t even have a dollar menu anymore, it’s now called a value menu. The other day I went there wanting a chicken sandwich thinking it was a dollar, turns out it was two dollars. Now there is not much of a difference but it’s a difference.

Also, those people selling ice cream in the small cart, yeah that ice cream used to cost a dollar and now it cost $1.50, some even $2. Again, not much of a difference but to me it’s a big difference because everyone carries at least a dollar in their wallet but now they have to worry about that extra 50 cents that they don’t have. It was easier to just take out that dollar and get yourself an ice cream, now you struggle to even find coins in your purse. To top that off, some people even charge for an extra scoop. In my time it was a dollar for two scoops and now it $1.50 for one. Chips were once 25 cents, now its 50 cent each. The other day I went to 7-Eleven to get chips and it said two chips for a dollar but 59 cents for one. What kind of math is that?

It’s not just the kids and the value of materials but it’s also how I’ve changed. Before I used to get excited for clothes or games but now I get excited to go to a furniture store, and I don’t even own my own house. I just go in and find everything fascinating – the sofas, the bed, paintings, whatever I find. That’s a sign of being old.

My friends are no help either. They are either getting married or already have children which makes me feel left out and confused. I feel pressured to grow up fast and be an adult which I am highly avoiding. While they are getting engaged and changing diapers, I’m over here wanting someone to build a time machine so I can be a kid again.

It sucks being this young and feeling so old. I’ve already done the math in my head, I only have 10 more years before I’m 30 years old. Ten! Those 10 years are going to go by so quickly and I am going to freak out when that happens. I know that I can’t go back in time and getting older is just part of life but, I can still complain and whine about it which I am happy to do so.