Catcalling is Not a Compliment 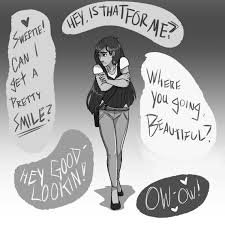 Many people think that by shouting at someone that they’re beautiful, it should be returned with a thank you. It’s simply not true. Catcalling is a comment about someone that was not needed or wanted. It’s sort of like when someone tells you that you’re getting fat and need to lose weight. As if you didn’t know your own body to tell you that you are getting fat and need to lose weight.

You didn’t ask for the comment yet it was said and now you feel bad about yourself. Maybe it was said in a nice way to look out for your health, but it still doesn’t eliminate the fact that it was hurtful and uncalled for. Catcalling is the same, it wasn’t meant to cause harm but it does.

Catcallers think that by telling you how good you look as you pass by them, you are going to turn around and thank them. They want to be thanked for a nice comment they gave you but it isn’t a compliment, it’s more of a way to make them feel more powerful than you. Because by checking you out and saying something nice, it makes them believe they didn’t do anything wrong.

I’m sick and tired of having to go through this almost every single day. This always happens to me. I turn around the corner from my house and pass by a couple of guys then all of a sudden I’m greeted with different catcalls from each of them. The day hasn’t even begun and I’m already getting smirky comments about myself. I didn’t ask for them and I certainly don’t need it because I know how I look when I left my house. I look great regardless, so I don’t need people to tell me so.

I’ve been catcalled since I was 13 years old, my boobs were just beginning to develop and I already felt uncomfortable with the way I looked because a 30 year old man decided to point out how grown up I am looking. It’s disgusting when you are so young and getting catcalled by a man triple your age. The worst part is that they think it’s a compliment they are giving. A 13 year old should not have to go through this, the constant worrying about the creeps in the streets who will make them feel uncomfortable.

There were times that I had to take a different route to get to school or to my house in order to avoid the nasty remarks these men gave me. Of course, it was a longer way but at least I didn’t have to feel embarrassed or humiliated. But there were other places that had no other route so I was forced to walk past them. I would take a deep breath and try avoiding eye contact. I can feel their stares as I walked past them wishing they didn’t say anything but then it came. It was unavoidable.

The worst part is that when you walk right past them without acknowledging their comment and they get offended and angry. Some of them will call you disgusting names like bitch or you were ugly anyways. Any bad thing they can think of to insult you, they will say it to you which will make you feel even more small.

That sucks because you were minding your own business in the first place until you passed by an ignorant person who commented on your looks and because you didn’t respond, you get insulted. We are trying to ignore them and feel respected by not acknowledging the presence of that person as if they didn’t say anything. That pisses them off because they want you to say something to them and smile at them for giving that comment.

I hate it when they say we females like being catcalled. How are they going know what I like and what I don’t like? They don’t know me but they think they do which is why they do what they do. They already make it clear who is the dominant one in the streets. Even when we speak back, it bothers us because it happened and, even though we tried to defend ourselves, we still can’t believe that we are the ones being put down.

Don’t get me wrong, any woman or girl loves being told they are beautiful and that they have a great smile but the difference is how it is said and by shouting and making sounds is not the right way to doing so.

There are females out there that are okay with it and many that are not, while there are men who disagree with catcalling and others who do it and have no shame of it. At the end of the day, everyone is different, everyone has a different way of reacting to a situation, and everyone may or may not feel comfortable in those situations. I think it’s just best for people to keep their mouth shut. If they don’t know how another person will take a comment then don’t say anything at all.

Obviously this column won’t stop them from catcalling, probably nothing will because everyone has a different mindset and once they think they are right there is no way to change their minds. But by just addressing the issue, we make it clear that there is an issue.