My experience as Gender Queer. 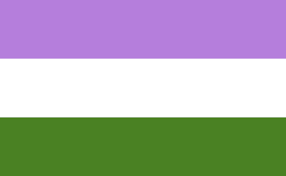 I differed from others, but I never understood why until later.

My name is Randi. Yes, I know that’s usually a boy’s name and spelled with a Y. Yes, it is my birth name. No, it is not a nickname for a different longer name.

My parents had their reasons for naming me Randi. They both liked the guitarist Randy Rhoads. But the main reason was that they wanted their kids to have unique names. Too bad for my brother and sister who names both became popular the years they were both.

I used to hate my name. It killed me every time I was a kid trying to find those cool name key chains with my name on it.

Did I cry about it a few times? Yes!

I grew to love my name as I grew older.

First, nobody had my name until I entered high school where there was a boy. Which was awesome because we didn’t have any classes together except gym during the junior year. So not much confusion.

Second, it was the perfect disguise for when I realized I was Gender Queer.

Yep, there it is. The Q word. Yes, I can say it! Yes, it still offends people. That’s their issue, not mine.

What is Gender Queer?

According to Lexico, a dictionary powered by Oxford, “A person who does not subscribe to conventional gender distinctions but identifies with neither, both, or a combination of male and female genders.”

That’s me. I identify as both.

I enjoy wearing a chest binder some days and a bra on others.

I love looking mix-matched. I enjoy waking up and just throwing on what feels right.

I came out to my parents about it when I was in ninth grade. A very confusing night for all.

My parents accepted it but didn’t understand it. Especially when the word queer fell out of my mouth.

My mom asked very concerned “Are- Is- Can you say that?” I smiled. “Yes, I can. I reclaimed it. It happens a lot with words.”

It was and had been a very long battle with my mom before I came out. I never hid it from my parents. I knew they would accept me and love me. The problem was how I can come out with an identity if I didn’t know about it.

My parents raised us in the best way. No offense to anyone.

My parents did what a lot of parents didn’t; they didn’t pigeon box us. Our assigned birth sex didn’t matter to a degree.

If we wanted a toy, we weren’t told “But that’s a boy toy. Don’t you want a girl toy.” Except for my grandmother. My mom told me a lot as a kid it’s because she grew up at a different time.

But I never came out to her, nor do I plan to. Why should I? They forced me to wear dresses for special occasions. Even Picture Day at school. As I got older, I could make my own decisions for said occasions, but still pressured to present female until I came out.

My mom and I fought a lot over makeup. Like sorry, mom I enjoy sleeping and not waking up extra early to cover my face in makeup. That ain’t me. Sorry.

If you wear makeup, honestly good for you and I give you mad props. I have nothing against makeup, it’s just not for me.

At least not every day, but that’s a different file of the secret drawer of my life.

While I identify as Gender Queer, sometimes I become fluid, where I just tip strictly to one side for a day or a few.

Waking up and feeling terrible about myself because my mind says Boy, but the body I was born with says Girl. It’s uncomfortable and it’s weird. Especially when I’m stuck on boy for a while, it just feels like I’m in an alternate reality where I’ve swapped souls with my boy alternative self.

A lot of mornings are trial and error. Try this on, nope. Try that on, nope.

Usually, I can figure out if it’s a binder or bra day pretty easily. Shorts and tops are a bit harder.

But I wouldn’t change this about me, why should I? I’m having too much fun being me and confusing as many people as I can with my gender.