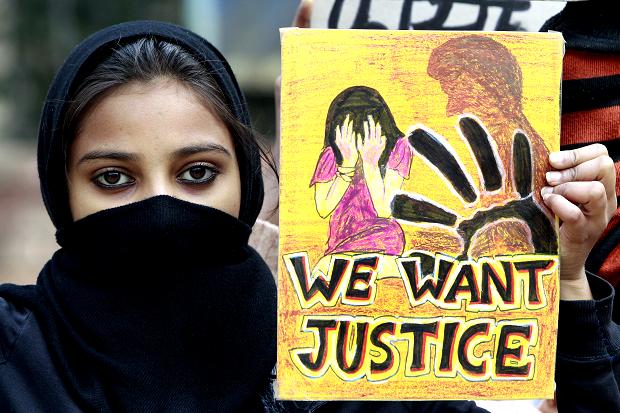 “We are very happy, justice has been served” are words that are rarely spoken by parents of rape victims in India primarily because when it comes to sexual crimes. Indian citizens feel that the legal system is inadequate.

On the evening of December 16th of last year, the sexual assault of a female in New Delhi not only shocked the Nation of India, it shocked the entire world. A 23 year old paramedic student was on her way home with a friend after seeing a movie when they boarded a bus full of intoxicated men at a major intersection in upmarket South Delhi, according to police. It was then that the young woman was dragged to the back of the bus while her friend was beaten, and repeatedly raped and tortured by five of the men.

It is said that the men used an iron rod to violate her as the bus drove around the city for almost an hour. When they had finished, they dumped the two victims by the side of the road. The woman’s injuries were so severe that some internal organs had to be removed. She died two weeks later at a hospital in Singapore.

The attack sparked major uproar all across India and the world, with protests being carried out for months, urging that the Indian government answer this injustice with Justice. Advocates criticized the world’s largest democracy for failing to protect half of its population. Protesters demanded better treatment of women and decried the apathy of police and the judicial system. After a trial that lasted about seven months, the Delhi court convicted four of the men ages 19 to 28 of murder, rape and kidnapping. They were all given the death penalty.

Since the assault in New Delhi, cases of rape in India have gained national and international attention, generating wide spread concern about the safety of women in urban and rural sectors of the country. A rape every twenty-two minutes, according to Indian government statistics, is just about the average time a woman falls victim to sexual assault in India. But, is India’s government doing enough to ensure the safety of its women? Maybe not. According to a survey report on Pew Research Center, an overwhelming 90% of Indians feel that rape is a very big problem and nearly 74% say that the laws in the country are too lax when it comes to punishing cases of rape.

It seems that the issue goes far beyond laws and cuts into a power struggle between men and women in Indian society. It is no secret that women are seen as a liability in Indian culture and society and many fear that laws won’t be enough to stop rape from happening.

“Enforcing stricter laws won’t make any difference because people don’t follow them anyway,” said Ms. Indian Princess International and New Jersey Saloni Sawant; “society is oppressive toward women especially in rural areas where they are basically tortured and forced to have many kid,s especially boys because they believe girls are worthless.”

When asked where the real solution lied, she replied with a simple word: education.

“I believe that it’s their responsibility to give better education to the people so they understand and are aware of the increasing problem.”

Too many women are told to never speak out about the crimes committed against them and those who do are treated as societal outcasts because they have brought shame upon their family name. However, it is because of people like Ms. Sawant who believe that education on gender equality is vital to not only women but also men that now women and their male counter parts are joining together in the fight against sexual crimes.

According to another survey conducted by Pew, roughly as many men (91%) as women (89%) say that rape is a very big issue and are demanding that the Indian government take better action when it comes to protecting their women. Every twenty two minutes a woman falls victim to rape in India, the clock continues to tick and as the victims pile up by the hundreds, so does the endless wait for justice.