Beyond the Prison Industrial Complex ( A personal Review) 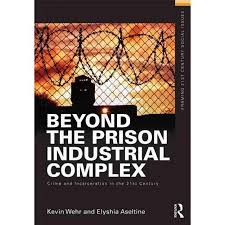 Every election that rolls by in New York City means that I am going to get a phone call from my sister and mother frantically asking me who they should vote for. This usually annoys me for various reasons; one of them being that they should care enough about their city to learn about who’s going to lead them, and two because it always takes really long. However, it does give me a sense of purpose to be able to know enough to help my families and others elect a sensible leader.

The most recent election healed to elect the next mayor of New York City was coming up and a man by the name of Bill de Blasio was running. I heard about him from a friend and I decided to look him up. The reason I am bringing up de Blasio is because of one policy that I feel really reflects and touches on this modern day Jim Crow and the prison industrial complex; this policy is about stop and frisk.

First off, I didn’t know much about stop and frisk until I was at the epicenter of a protest against it. I just knew that if you were brown or darker, you would most likely be stopped. I didn’t think de Blasio knew anything about being stopped and frisked, or the difficulties that came with being a minority. It wasn’t until I saw a campaign ad depicting him and his family. A black wife and three children of mixed race is what I saw, I thought then that maybe he wasn’t so blinded by his white privilege to see that being a minority in NYC is a very hard thing to deal with.

I have a younger brother who is a big part of why I voted for de Blasio and why I told my parents to. My younger brother is a very smart kid. He is extremely caring, he has a great moral compass and aspires to do a lot in life. My brother is also 6”2, has an afro and although he isn’t very dark skinned, he also isn’t white. To a police officer at first glance my brother may seem like a threat, actually to many people walking in the street my brother may come off as threatening. This isn’t because he is, this is solely because he is being judged off of his appearance. He has been fortunate enough to not have ever been stopped because he doesn’t really stay out late. However, I cannot say the same thing for many other people I have gone to school with. The reality is that I have seen friends of mine be stopped by police officers because they are black or a minority since I was in middle school.

Beyond the Industrial Complex is a lecture that I was watching on modern modified version of urban Jim Crow today. It also spoke about how the Prison Industrial Complex survives and thrives off of Minority men who have been betrayed and set up for disappointment by the criminal justice system in American. Beyond the Industrial Complex makes me think of my experience as a student growing up in NYC. Instead of lessons of general statistics I sat through lessons that exposed the bias within the prison system. More than half of the inmates in American prisons are minorities. I felt that in a way they thought that it was in our genetics to end up there and that in order to save us from our fate they needed to show us our “statistics”. Nothing about this has changed and for all of the right reasons. It is imperative that people like Alexander M and Ruth Wilson Gilmore continue to speak out and give power to the modern day abolitionists.

These people are not the only ones that are helping encourage modern day abolitionists, recently Humans of New York photographer Brandon Stanton came across a school that is working hard to make children in Brooklyn the change they wish to see in the world. This interview touched the hearts of millions including myself and I feel that it has a lot to do with the readings. In an interview with HONY, a student of Mott Hall Bridges Academy in Brooklyn shared the following:

“Who’s influenced you the most in your life?”
“My principal, Ms. Lopez.”
“How has she influenced you?”
“When we get in trouble, she doesn’t suspend us. She calls us to her office and explains to us how society was built down around us. And she tells us that each time somebody fails out of school, a new jail cell gets built. And one time she made every student stand up, one at a time, and she told each one of us that we matter.”

I feel the need not to dwell on the bad, instead I feel that the way out of mass incarceration of minorities is to teach them that we can aspire to be much more than that and that through knowledge and spreading this word, we can truly achieve the freedom that comes with being an American.