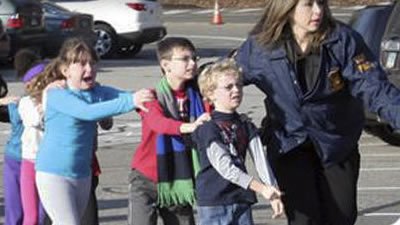 Columbine High School, Virginia Tech, Colorado Cinema, and now Sandy Hook School in Newtown. What do all of these places have in common? These places and their communities have been destroyed by massive shoot outs from deranged gunman.

On Dec. 14, 27 people died because a man named Adam Lenza, a troubled 20-year-old from Hoboken, New Jersey came into the school around 9:30 a.m. His mother reportedly worked at the school, where she was shot and killed. Lenza was pronounced dead after state police and S.W.A.T teams arrived.

This horrific event is the second most massive shooting in U.S. history. ABC News is comparing this tragedy to 9/11 and I agree. Whenever someone kills other person(s) it is a tragedy. However, young lives were shortly stopped all at the same time. On 9/11 lives were lost instantly when two plains collided into the North and South Towers.

Of those 27 people killed 20 of them were children. They were between the ages of 5-10. President Obama gave an emotional speech about the massacre later today. He said most of the victims were children, ‘They had their entire lives ahead of them, their birthdays, graduations, weddings etc…’ He said he will do the same thing parents across the nation will do, and that is hug their children a little tighter tonight.

For me the problem is gun control. Why does a 20-year-old (not even legal to by a gun) need a gun? Why do people sell guns to random people pretty much everyday? I think people who sell guns as a living should do a complete back ground check, the same back ground check police officers and FBI agents do. If that doesn’t work then I think guns should be illegal to obtain or possess.

Last Summer James Holmes shot 12 people at a midnight showing of The Dark Night Rises in a movie theater in Aurora, Colorado. He was arrested and is on trial. This event was also caused by gun control. I don’t think people should live their live in fear because a few troubled individuals express their anger and their violence in public areas. I do agree people should be more cautious to whom they associate themselves with.

To the parents of the children who survived the massive shooting I can only imagine how grateful they must feel to see and hug them. I cannot compare their emotion to mine, but I am also thankful that most of children in the school were save. I cannot express any comparison with parents who lost their kids today. All I can say I am truly sorry. My thoughts and prayers are with you and our family.