Shake it up! Are the Harlem Shake viral videos making a comeback? 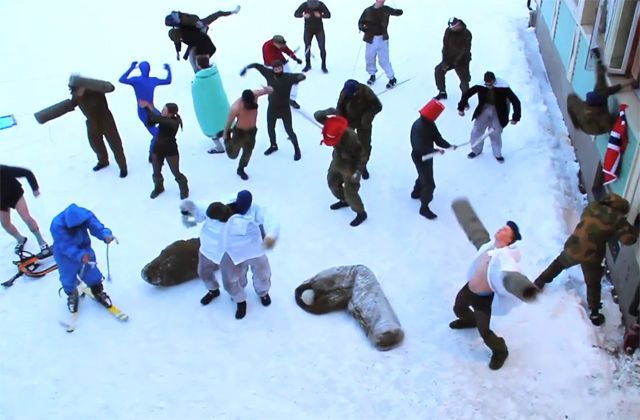 Before the viral videos of universities, members of the U.S. Army and swim teams I’ve never head of the dance sensation “Harlem Shake.”

It seems as if everyone and their mother are performing these ‘earth shaking’ moves (no pun intended.) However, where did it all start? And how did it get so popular?

Well originally the dance has been around for awhile. And when I say awhile I mean decades. It has been traced back to a street dancer by the name of Al B. Al B used to entertain the crowds at the Rucker tournament, which is a legendary basketball league in Harlem, New York. The dance was named after the location where Al B performed, Harlem, and I assume the dance showed Al shaking his shoulders and arms while moving his hips side to side simultaneously. Sadly the dance faded away…until 2013.

The viral videos show one person (usually wearing a mask), and at first they are moving their arms up and down (close to their hips) while moving their hips in the same direction at their arms. This person dances alone while everyone else looks predictive. When the music which is played by Brooklyn-based Latino producer Baauer drops to dubstep beats that’s when everyone goes wild. People then change clothing, they start dancing to the dubstep beats and there seem to be more people when the beat drops than there are when it was just the one person.

Frankly, when I first saw these videos I thought it was another popular dance move such as, the Macarena, Soulja Boy’s “Crank That (Soulja Boy)” or the famous Gangnam Style by Psy. This means it made me laugh. The reason why is because first you see one person in a funny or bizarre outfit gyrating both their hips and arms to house music or DJ music. Next the beat of the music is moving at a faster speed. This made me think what is going to happen next? Then the beat drops and now everyone is dressed in outstanding outfits and they are dancing at the same level or speed as the person who started it. And then it ends.

I do agree with why the people in the video are upset because Al B created the dance and named it first. For insistent, square dancing originated in the Southern regions of the U.S. If people from all over the continent started a new routine of square dancing I imagine parts of the south would be upset. Also some people described the dance as “just shaking their bodies, I know what the Harlem Shake looks like and that is not it.”

Even though the videos are entertaining, I don’t think the videos are going to be more popular than they already are. I think to dance should stay where it belongs and that is in Harlem.