Why Can’t we be Friends? 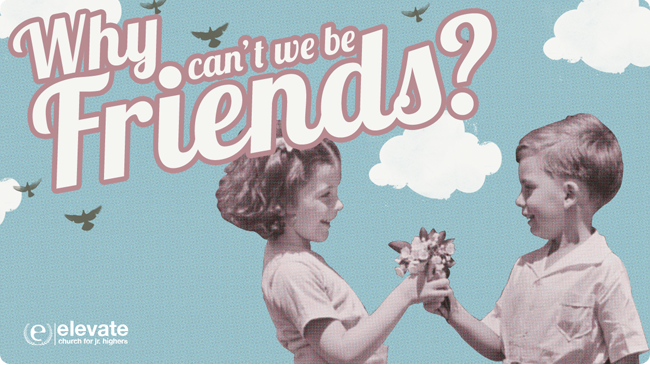 There are a lot of unanswered questions about why men and women do not get along. However there is only one question that has been debated over hundreds of thousands of year but it has never been truly answered. Can men and women be friends?

If you are like me and love romantic Comedies you remember the film “When Harry Met Sally,” and that intimate scene when Sally is in the deli and starts- oh wait, that’s next week’s blog. Never mind. Anyway, Harry is driving with Sally and they start talking about being friends during their time together. Sally says she wants to be friends with Harry, that’s when Harry says, “Men and women cannot be friends because the sex part always gets in the way.” Sally asks Harry if that would still happen when both people are not attracted to each other Harry says, “Yes, because the man will always be thinking about sex even if the woman is not.” Sally ends the scene with “I guess we are not going to be friends then.”

So is sex the one to blame? A study on ScientificAmerica.com suggest that non-romantic friendships between males and females are not only possible, but common—men and women live, work, and play side-by-side, and generally seem to be able to avoid spontaneously sleeping together… The study continues with people who were in a relationship that involved sex has a ‘hard’ time becoming friends with their exes.

Even though the scene from “When Harry Met Sally” and the study about how men and women interact with each other is true I think men and women can be friends, before having sex and afterward. I think if the person that you are with is genuine, respectful, and overall down to earth then both people can be friends.

On AnswerBag.com a question which read, “Can a woman really have a male friend with no romantic tension?” The answer, yes. One member on the site said, “Humans are sexual animals. Whether or not a person thinks about it the natural urge for sex will start showing through eventually. The thing is, it doesn’t have to interfere with the friendship. It won’t interfere unless you let it.”

I have many girlfriends, but only a few guy friends, but my guy friends are friends that I met while I was in a relationship. So I never had a sexual feeling for them.

The responder goes on to say, “In all honesty, I’ve had a few of my female friends for many years. Some of them I have NEVER had any romantic desire for; not because they were unattractive (which they aren’t) but just because I saw them as a friend and nothing more.” This statement goes against what Harry said to Sally. Maybe women and men can be friends?

At the end of the day, sex does change the way men and women connect with each other. Nevertheless, there are ways to become friends with the opposite sex. One way is to befriend our partner’s friends. Another is to become friends before going into a relationship.