Justice Was Blind, But Now Can See Wealth

The Justice System in American is everything but justice-worthy 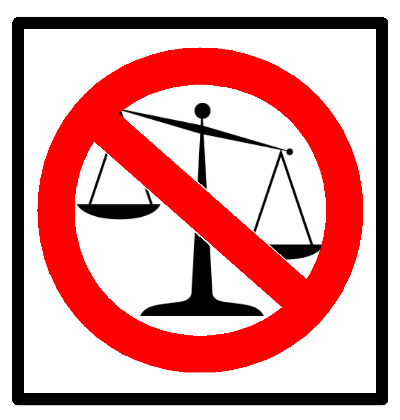 Life isn’t fair. No one said it was, and it shouldn’t be fair, because then there wouldn’t be any competition, any winners and losers, any motivation and pure drive to do and be the best. Living in a world of unfairness is considered normal; however, I believe the Judicial Branch of Government in this country should treat everyone with fairness. Why? Because whatever crime or misdemeanor one has done that person should receive a fair amount of jail time, or whatever the punishment may be.

In the last couple of months, there have been cases were people with an outrageous amount of money have done drastic crimes-one of two wealthy individuals who committed theft, driving under the influence of alcohol, and as a result of their state-of-mind while they were driving they killed four people, was a 16-year-old Texas male teenager named Ethan Couch. The other wealthy individual rape both of his young children, one girl, one boy. His name is Robert H. Richards IV, Delaware. Now what do you think the amount of jail time or punishment was? No you are wrong, it was absolutely nothing.

No jail time, no death penalty, no fines to own, there wasn’t even a warrant for their arrest!

The U.S. is well-known for a lot of names, but when it comes to prison, it has the largest amount of inmate in the world. 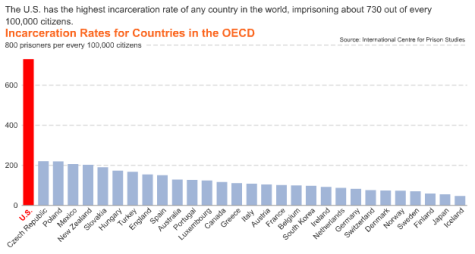 Now there would have been jail time, fines, life without parole, even the death penalty for citizens in the poor, lower, and middle classes. Three reasons why the judge didn’t give Couch, the Texas teenager any jail time was:
1. He hired a psychologist who told the judge “Couch suffers from ‘Affluenza.'” A disorder that doesn’t even exist.
2. The psychologist stated that because Couch has always received everything he ever wanted form his parents, he doesn’t know what is right and what is wrong.
3. Finally, this part explains this entire discussion, the judge agrees with the psychologist’s defense, because they picture what they would do if their off-spring were in Couch’s shoes.

By this statement I made indicates that the justice system is based on economic scale. Judges make a lot of money and are relatively rich. They recognize other rich individuals who come into court with major/minor crimes and get off free of any punishments. It is what it is because wealthy people can afford lawyers who bend over backward to make their client innocent. That wouldn’t be the same for the average worker in the states-they don’t have the resources and judges don’t relate on the same economic scale as them.

Therefore, only the one percent, the millionaires and billionaires of today don’t get as nearly as much prison time as the average individual worker. It’s true, just read how many times celebrities have been arrested and get little to no jail time.

I don’t want this discussion to turn into a black and white issue, simply because it’s not. However, I stumbled upon a video that showed a Louisiana man who spent three decades in prison on death row who finally was free of all charges earlier last month. The reason why he was convicted, by an all-white jury, and put into prison was he was accused of robbing and murdering a watchmaker named Isadore Rozeman. This story made me sick-imagine being accused of a crime you didn’t commit. Imagine being locked in prison for year-upon-years, never seeing your family, your friends, your whole life is gone, and the reason for all of this is because you are the minority, you are an African-American. And then finally after decades you are set free. I don’t think I would want to live my life after that moment.

Nevertheless, this is the world we live in, nothing is fair, not even the justice system! However, this happens all the time in the name of the law. Police stop-and-frisk minorities, police arrest minorities for drug use, police use excessive force on minorities, and on people who are homeless and poor. 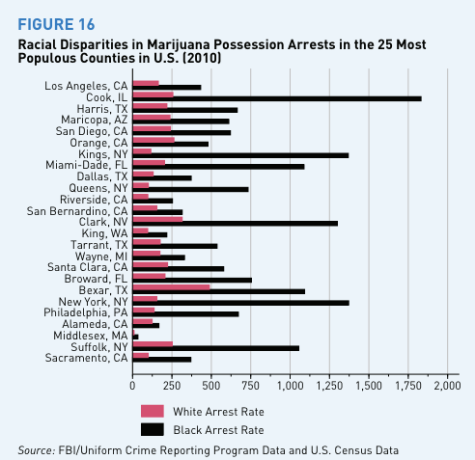 I would favor that there needs to be a better sentencing system when it comes to drug use and misdemeanor crimes. A person who is in court for drug use should not get a life without parole. Just like an affluent teenager, or a father who rapes his kids should not get a “slap on the wrist.” Maybe these rehabilitation centers that have yoga, meditation, relaxation spas, etc. should join with county or federal prisons and maybe inmates when their sentencing is over can come out of prison a better human being.