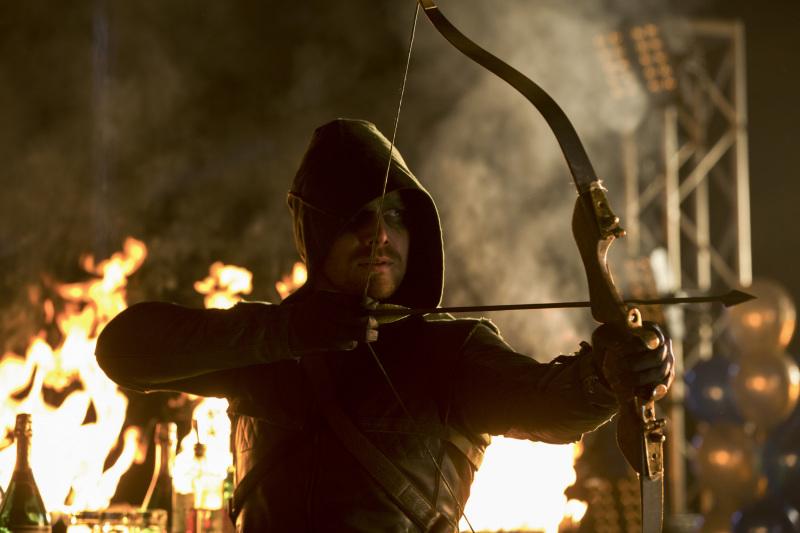 Arrow is a television series written and produced by Greg Berlanti, Marc Guggenheim, and Andrew Kreisberg, which premiered on The CW on October 10, 2012. The plot centers on Oliver Queen, a billionaire who disappeared along with his father for five years after their ship sinks under mysterious circumstances. This shipwreck left Queen stranded on an island unknown to him, and with his father’s cryptic last words, Queen is determined to right the wrongs of his home and succeed where his father allegedly failed.

I have tried, and failed to watch this show numerous times. A few things have convinced me to do it, and a few have stopped me in my tracks. When the show first had a trailer, it seemed relatively interesting. The action is all I can remember now. I would see it on television as I would channel surf and think, “Why don’t I watch this?” Friends of mine watch this show, and recommend it now.

However, there were plenty of reasons I didn’t watch it.

If school didn’t get in the way, it was a series of chores. If not chores, than it was meeting up with friends, but something always prevented me from watching his show. And when I finally did, it just irritated me.

In every one of my attempts to watch this show, I make it to where I am now, Episode 3. If it isn’t the overdramatic reactions to standard conversations, than I can always count on the stiff, plain, permanently fake-smile plastered onto Queen’s stupid face to turn me away from the show without fail. This actor, as of now, has no concept of emotional range.

The supporting characters are no better, overreacting even worse too many elements of daily life and breaking down like teenagers. The only one who actually is a teenager puts her emotions into overdrive, constantly playing the, “You don’t understand me, or my struggle! I’m so rich and misunderstood, it makes me want to die” card.

However, this time, it is less irritating. Yes, every single character save for Queen’s best friend Tommy Merlyn does something unbearably irritating with their emotions or face, but I have been promised by friends that the future of their emotional range becomes more rational and realistic.

With this in mind, I started anew, and clicked play on Episode 1.

The series begins with a mysterious intro from a seemingly outside narrator. The slow paced, chilling delivery of spoken word used to introduce the island was flawless; the kind of voice I wish I had when I read aloud to scare children or draw emotion into listeners.

Queen discusses righting the wrongs accidentally established by his father rather than the events that took place on the island, leaving the audience in shadows to the events that transpired there. (I see them putting our ignorance of these events to use in the near future in a bad, Deus Ex Machina kind of way. For example, if Queen needed to jump up a 30-foot wall, they would make it so, and explain it off, saying it was something he learned while on the island. This is a potentially dangerous tool.)

He spots a boat a few hundred feet out, and runs to grab a bow and arrow. He shoots it at a pile of sticks, setting it on fire. This alerts the ship, and the crew rescue him from the island. Upon his return home, Queen is checked on in the hospital. 20% of his body is covered in scar tissue. The doctor warns his mother before she goes in to see him that the Oliver she lost may not be the one she got back.

Once allowed home, he greets his mother, her new lover who used to work for his father, and his sister. When he saw his sister, the lines were so preachy, I was reminded why I stopped watching. They went like this:

“I missed you so much.”
“You were with me the whole time.”

Some irrelevant things happen, but certain elements kept me hooked. For example, Queen didn’t know that his mother began dating his father’s business partner. Queen says something in Russian. The dialogue that followed was hilarious:

“I didn’t realize you took Russian in college.”

“I didn’t realize you wanted to sleep with my mother.”

This is the only place that his plain stupid face came in handy.

Queen is sleeping in the next scene, but during a nightmare, his mother tries to wake him out of it. He choke slams her on instinct (bad day for his mom), and the scene changes shortly after. The plot officially begins with Queen looking for one of the people on his father’s list, Adam Hunt, who has been stealing money from people. He begins by searching for a warehouse, but in the process, he gets knocked out and abducted with Merlyn. In an escape attempt, he gets shot at, miraculously dodging every bullet.

Queen throws a party right next to Hunt’s office as a cover story to steal money that was rightfully the property of others. He encounters his sister, and also a previous lover interest Laurel Lance, who he cheated on with her sister. Lance’s sister died on the boat. Hunt was killed by an outside source during Queen’s party. During a fight between the Hood and Hunt’s security. The episode ends with a gigantic plot twist. It was his mother who tried to get him abducted to get information on what happened on the island.

The second episode removed all of that introductory style, forcing information into 45 minutes. Queen’s little sister makes his death all about how hard it was for her, and later, Queen’s mother assigns him a body guard, named John Diggle who will be a distraction to get away from on his missions.

After this, a man named Martin Somers who is on Queen’s list has a lawsuit brought against him from Laurel about his involvement with drug trafficking. Queen threatens Somers for a confession, but Somers calls in a group of gang members and an assassin to attack Laurel. He saves her and manages to get an audio recording of a confession, giving it to Laurel’s father, Detective Lance.
Throughout the episode, Queen’s mother tried to make him more involved with the family business, however, he publicly declined. Queen rationalizes his decisions with the fact that he would be unable to avenge his father and work for the company.

In the next episode, Queen is searching for another millionaire from his father’s list, however, the man is murdered on his rooftop by a mysterious assassin named Deadshot before Queen can question him. There was some evidence that the Hood killed the man, however, this was later disproved.

At another party, Queen’s sister Thea, in a drunken rage, tells him that Tommy and Laurel were sleeping together while he was on the island.

Queen asks Detective Lance for assistance to capture Deadshot, however during the fight, Queen kills him. In addition to that, his body guard is shot, and in order to save him, Queen must take Diggle back to his hideout and medicate him, but also reveal his identity.

Throughout the episode Queen experiences flashbacks from the island where a man shot him with a bow and arrow, but was only out to help him. However, Queen tried to escape, only to be captured immediately.

I have high hopes for the remainder of these episodes, as they were more tolerable this time around.