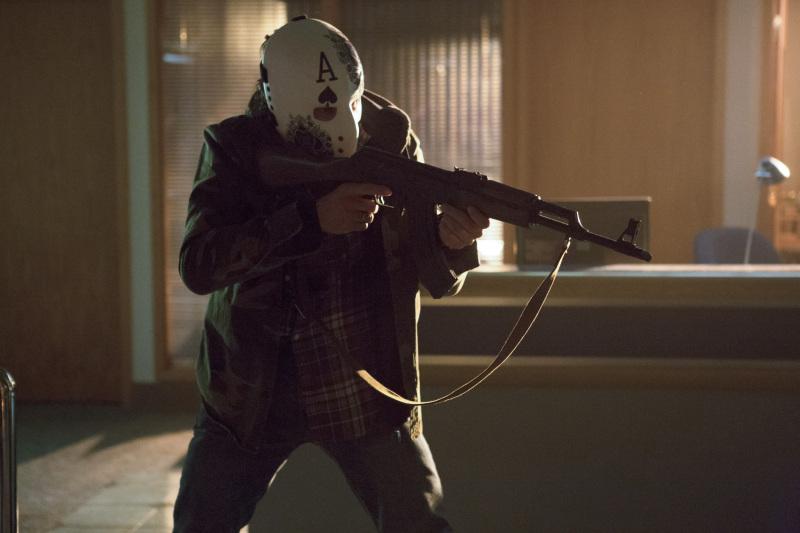 Arrow 4-6
Episode four picked up with Diggle’s condition undetermined as he regained consciousness. His vision blurred, he sees the vigilante that was in the green hood sitting on a desk in front of him.
His hood was down in this encounter, and Diggle discovers that the vigilante was Oliver the entire time.
Oliver offers Diggle the opportunity to join him in eliminating the threats on his father’s list.
Diggle declines, ensuing a heated argument about the conviction and morality behind murder when the people murdered are not innocent.
With Diggle’s disdain for Oliver’s decisions made clear, the scene changes to the Queen family living room.
Oliver, his sister Thea, and his mother Moira are watching the news, and they see that a man named Declan was on death row for murder. Declan had previously worked for a man named Jason Brodeur, whose name appeared on Oliver’s list.
However, Oliver can’t prove Declan’s innocence without help.
He requests assistance form Laurel to prove Declan’s innocence before he can be sentenced to death.
This information gets back to Jason Brodeur, causing him to send a bodyguard to stage a prison break in an attempt to kill Declan and Laurel before she can speak with him to prevent the truth from being be revealed.
Oliver intercepts the prison break dressed as a guard in a ski mask, saving Laurel and Declan.
Oliver threatens the bodyguard into a confession, saving Declan’s life.
Diggle sees the positive influence that Oliver’s work can have on the city through Declan’s experience, and agrees to help Oliver in his mission to save the city, while keeping Oliver’s sanity in check.
Meanwhile, Laurel’s father, detective Lance is reviewing security footage from Oliver’s party in an attempt to discover the identity of the vigilante. Detective Lance sees Oliver retrieve an unidentified outfit from the garbage can, and sees this as sufficient evidence to arrest him.
The arrest takes place on the basis of suspicion of murder, and again, the scene changed
Walter had been looking for a warehouse throughout some of the episode, and he finds one that Moira had been hiding from him. Inside of the warehouse, he finds the salvaged remains of the Queen’s Gambit, her previous husband’s ship that sank five years prior.
The next episode begins with Oliver in an interrogation room. He refused to answer any questions until a lawyer was present and requested Laurel, Detective Lances daughter, as an attorney.
She initially declined, until Oliver pleaded for her to change her mind. Oliver takes a polygraph test to prove his innocence, (even though lie detector tests are inadmissible in a court of law, so I don’t know how that worked out) and passes with flying colors.
There is then a flashback to Oliver’s time on the island where he is captured and tortured by professionals. This is what caused his scars that he came back with years later.
He later shows Laurel the scars, revealing that he was not alone on the island.
Oliver was placed under house arrest, and decides to throw a party as a cover-up, while Diggle dressed as “the hood” to stop a German arms dealer selling to city gangs.
Moira meets with an associate who knows about Oliver’s father’s list and declares the hood is a threat.
Walter goes on a “business trip” after the discovery of the warehouse.
The next episode begins with Oliver stating that he is ready to get back to the list, while Diggle proposes that Oliver works with the police to help them take down a group of bank robbers. Oliver refuses, stating that the police would distract from his mission.
Oliver speaks to Felicity Smoak, an IT specialist, and discovers that the bank robbers are a family, the father of which being a previous worker for Queen industries before 1500 jobs were outsourced to China.
Oliver offers them a chance to stop or be stopped. The family plans to rob another bank, and get confronted by the man in the hood. In the fight that ensues, one of the robber’s adult children dies.
Tommy throws Laurel a fundraiser to help a pro-bono law firm stay in business in an attempt to impress her.
There is another flashback of Oliver finding the names in his father’s book after placing it in fire.
These episodes were good overall, and honestly less irritating than the first three. They held my attention, but more importantly, the characters made more sense emotionally. Prior to now, they experienced emotional mood swings that made no real sense, and brutally attacked Oliver, who barely survived on an island for five years. Now, they appear to be softening up to some degree. Also, the absence if Thea was convenient because of her vast emotional problems.