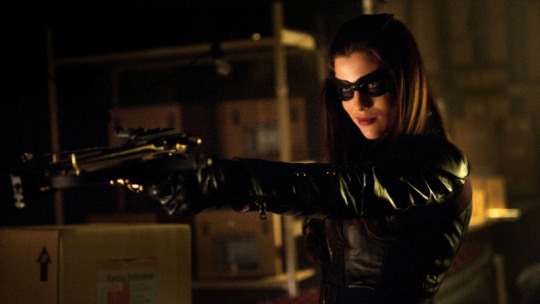 This episode of “Arrow” began with a mysterious person riding a motorcycle who decided to open fire on an entire street in an attempt to murder one person. One of the people on the street was Oliver’s mother, Moira. The gunman was aiming for a man who worked for Frank Bertinelli, an alleged mob leader.
Oliver ran down the motorcycle, somehow running fast enough to temporarily match the speed of the motorcycle, but eventually losing sight of it behind an 18-wheeler, allowing it to escape.
With his family’s safety compromised, Oliver decided to go undercover with the mob, pretending to be interested in a business venture.
Shortly after the meeting, it was revealed that Bertinelli’s daughter Helena was the attacker.
Bertinelli had some of his men killed by the Triad, a group of assassins, and Bertinelli met with one of the higher leveled members, China White, to discuss the deaths. A fight broke out between them, which was stopped by Helena and Oliver.
It was revealed that Helena’s father had her fiancé killed by her father, or on his command.
Oliver and Helena got kidnapped, and during the escape, Helena discovered that Oliver was the Hood from his fighting style.
Once free, they argued about ideals, Oliver claiming that she is killing innocents, and Helena claiming that her father is not one. Helena even said, “Why is your vendetta more valid than mine?”
The next episode opened with Helena attempting to kill China White, and failing. Oliver claimed that he would show Helena that there can be justice outside of revenge, or some garbage, and Diggle expressed his disapproval and distrust in Helena for doing the exact same thing as Oliver. does.
Helena tries to open up to his idea, but she felt she was only being used after an extremely awkward dinner with Tommy, Laurel and Oliver, where he didn’t reveal that he and Laurel used to date.
Helena developed a plan and managed to kill the leader of the triad in her father’s name so they would target her father as a result.
China White, the new leader of the Triad in the event of the death, declared war on Bertinelli.
The Triad arrived at Bertinelli’s home and opened heavy fire on them. The mob responded with bullets of their own, and in the fight, Bertinelli attempted to escape, only to be stopped by Helena. They fight as well, until Oliver interfered (because he can’t mind his damn business). Bertinelli was thrown in jail, and Oliver and Helena went their separate ways, with Helena confessing that her justice was in fact fueled by rage.
In the next episode, the man from the very first episode, Adam Hunt, was killed with arrows. This was not Oliver’s doing, although suspicion was placed on the Hood. The only officer who was not convinced was detective Lance.
A flashback to the island shows that Eddie Fyers, the man who had Oliver tortured, was captured by Oliver than the original hooded man, Yao Fei. Fyers revealed the original intent of the island, which was to hold the world’s most dangerous prisoners until a convenient time came that they could be killed. This was the responsibility of Fyers and his men.
In the present, the mysterious archer took some civilians hostage, causing Oliver to approach him to protect his name. The two fought, both being injured, and the mysterious hooded man escaped, but not before being revealed as Tommy’s father, Malcolm Merlyn.
Merlyn had Walter kidnapped to prevent Moira from interfering with any plans he may have.
Oliver left the fight reflecting on what he was told by Merlyn about his list: it wasn’t compiled by his father at all.
These episodes were undeniably better than the previous episodes. The introduction of Helena Bertinelli and her entire backstory was better than Oliver’s in my opinion. Yes, she was “killing out of revenge”, but that just means that she is killing out of personal experience, not just shooting at random people in a book that wasn’t even written by the person Oliver thought it was. Her killing is out of revenge, but his is completely blind and misguided. Helena is an interesting character with the most motivation for what she does out of any character that has been introduced thus far.
There were also a few surprise elements in these episodes. For example, the revelation that Helena was sabotaging her own father, or that Merlyn was the second hooded man. Also, during the fight between Helena and her father in their yard, Bertinelli shoots at his daughter willingly. That was funny.
These episodes made me begin to realize that Oliver’s cause is debatable, but that he is more selfish than originally portrayed. The goal of his list is to kill everyone on it, not just place them in jail. As soon as someone tries to kill other than him, there is a large problem. Oliver develops reasons why it is wrong for others to kill, even though the name Helena was targeting was on his list, and her help would only make it easier.
His hypocrisy is growing, but to some extent, I like the main character having something about him to hate, because a character with no flaws leaves nothing to be developed.