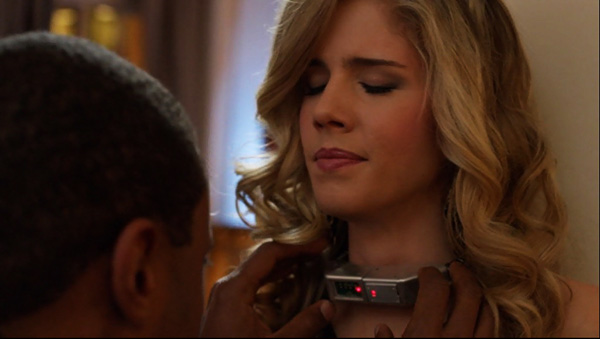 This episode of “Arrow” began with Oliver confronting his mother as the Hood. He put on the disguise, broke into her office, and pointed an arrow at her. However, she plead for her life, showing the Hood a picture of himself and Thea. Moira begged him not to take her away from her children, and Oliver takes that as enough incentive to believe she could do no harm. While distracted by her pleas, she pulled a gun and shot him.
Oliver barely escaped, and went to hide inside of Felicity Smoak’s car. He revealed his identity, and she took him to Diggle for help.
The story shifted to a flashback. It began with the escape plan from the island. Slade was training Oliver for the fighting that will be required to make it out alive. There was a plane headed toward the island that would be leaving shortly after it came in. Slade wanted to get on that plane. He intended to fight guards on the ground while Oliver killed the man in the radio tower to ensure that no one could send a message to stop the plane.
Before they depart, Oliver asked Slade of his history, and Slade explained that he was part of an Australian task force along with a man named Billy Wintergreen. He stated that Wintergreen was the man who tortured Oliver. The two had survived a plane crash and were offered to join Fyers in his plans, and Wintergreen agreed.
The story switches back to the present, and Felicity wasn’t surprised that Oliver was the Vigilante based on his odd requests over the past weeks.
Oliver’s heart rate increased, causing Felicity and Diggle to use a defibrillator on him, and bring it back down.
The story moves back to the past again, with the plan in motion. Slade removes most of the guards, and Oliver goes to kill the man in the guard tower, but he loses the fight, forcing Slade to intervene. Slade then goes to complete his mission, but Oliver made the mistake of calling Laurel on a nearby phone, not having heard her voice in a long time. She answers, but he can’t bring himself to respond. They hang up, but not before the radio activates and requests a code from Oliver to get the plane. It is a quote from “The Odyssey”, and Oliver happened to remember the ending, preserving the possibility of escape.
With the airstrip secured, Slade reveals his intention to call an air strike on the island. Oliver objects, trying to but enough time to save Yao Fei for saving his life. Slade gives him one hour to get him back.
In an attempt to get him back, Oliver is recaptured by Fyers. Slade returns to save Oliver, but encounters Billy Wintergreen. The two face off, and in a close fight, Slade kills Wintergreen. In the ensuing fight, Fyers shot Slade. Oliver tries to get the bullet out. It is revealed that Yao Fei will not leave the island without his daughter who has a mysterious dragon tattoo on her left shoulder blade.
Oliver wakes up from being shot by his mother as the story returns to the present. Felicity agrees to assist Oliver in finding Walter, but then she would depart. Oliver told Diggle that his mother is off limits, and is shown to have the same tattoo as Yao Fei’s daughter.
The next episode began with a jewel thief wrapping an explosive necklace around a security guard’s neck to make him open up a case with a ruby inside.
There was a flashback to the island, and Slade’s arm was infected from the bullet wound. He sent Oliver to get some miracle herb that cures ailments and injuries.
When he goes to get the herb, he encounters a man who is beaten and tied up. He is allegedly a college student that got stranded on the island and asked to be freed. Oliver refused, in fear that this was a trap set up by Fyers.
The story moves to Moira meeting an old friend named Frank Chen who lost his daughter in an attempt to leave the organization Moira is involved in. She requested that he hire someone to assassinate Malcolm Merlyn so she could leave too.
Oliver discovered that the man who is placing bomb collars on people is named the Dodger. He held a jewelry auction to lure the Dodger out. The Dodger took the bait, but Felicity confronted him for trying to steal, and he planted a bomb collar on her. This allowed him to escape, but Oliver caught him and deactivated the collar.
Throughout the episode, Thea got robbed in the Glades and tracked down the robber. It was a troubled youth named Roy Harper who made her believe that his mother had a drug problem to get out of Thea filing charges.
Moira got her meeting with the assassin China White, who was brought in to assassinate Merlyn.
These episodes were interesting in that they were some of the first to develop the past more than it had been in most previous episodes. They also introduced a new character, Roy Harper that may just make Thea a little less annoying. The story is advancing with another person knowing Oliver’s identity, but also with Moira targeting the most dangerous target in Starling City.