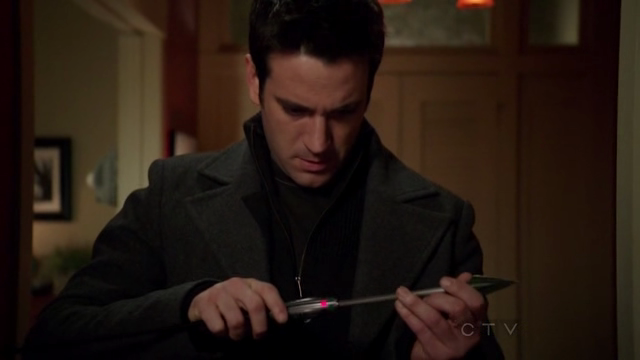 In this episode of “Arrow”, a hired assassin came to Starling City. Oliver killed him quickly on a rooftop. However, the conflict didn’t end there, because he came with a target, and whoever the target was wasn’t dead. This could have resulted in another assassin being hired, so Oliver was wary.
There is a brief flashback where Oliver tries to fix Slade’s broken radio that was destroyed during his crash on the island.
The plot moves back to Oliver, who is now dating McKenna Hall. The two go to Laurel and Tommy’s apartment for dinner. Tommy’s father arrives with an offer for Tommy to show up to his acceptance at the humanitarian awards ceremony. Tommy initially declines, but is persuaded in the end by Oliver.
During this time, China White goes to get an additional assassin to help kill Merlyn. It is Deadshot, who apparently survived his fight with Oliver, only losing an eye to the arrow that shot him. They have a plan with Moira to kill Merlyn as he accepts the award.
During the humanitarian awards ceremony, Oliver discovers that the target is Merlyn and he calls detective Lance. The lights go out, and people scatter, while Merlyn takes Tommy upstairs to his office.
During the escape attempt, Oliver stops China White from getting to Merlyn and Tommy. They fight, and Oliver wins, but while he has her in his sight, McKenna intervenes, and China White takes advantage of this to escape.
Merlyn and Tommy are stopped by two of China’s men, and Merlyn disarms and kills them both, raising suspicion from Tommy. They get to his office, but Merlyn gets shot by Deadshot. He had a bullet proof vest, but the bullet pierced it, and Deadshot uses poison in his bullets. With his life hanging in the balance, Oliver comes in to save Tommy’s father in his Hood disguise. Tommy pointed a gun to the Hood’s head, but Oliver advises him to let him help. Tommy asks why he should trust the Hood, and Oliver reveals his identity to save time.
The flashback returns to Oliver making attempts to fix the radio, and Slade proceeding with his plans to catch the plane.
The story moves to present day, where Oliver tells Diggle that Lawton, or Daedshot, is still alive. Diggle took this hard because Deadshot is the man who killed his brother.
There is an additional shift to the past, where Oliver and Slade arrived at the plain landing. They saw a large missile machine, capable of starting war.
The story returned to the present, where Malcolm discussed his suspicion that someone from the inside of his organization attempted to have him murdered.
Laurel then at a knock on her door. Her estranged mother reveals possible evidence that Laurel’s sister, Sara, may still be alive.
In the next episode, Helena has made a return to the city. She is searching for her father again, knowing that he will be released from prison because he became an informant for the police.
Oliver also finally opened his damn club that the entire show has been taking place around.
Laurel sets up a meeting with her father and her mother to put this belief that Sara is alive to rest.
Thea was in the Glades trying to get Roy a job at her brother’s nightclub. He doesn’t feel the need to accept handouts, especially from rich people, but he accepts.
Helena reveals that she came back to the city to get Oliver’s assistance to take on the armor of people that would be protecting her father. Oliver initially declines. However, Helena decides to hold Tommy hostage until Oliver agrees.
They developed a plan to ambush two armored police trucks, one of which holding her father. Oliver has an empty truck, but when Oliver catches up with the other trucks, Helena is in handcuffs because it was a set up. The police tricked her.
The plot moved to a flashback where Oliver and Slade decide to kill every guard in charge around the missiles. This would allow them to get a better look at the machine, giving them a chance to shut it down.
The story then resumes in the present. Thea confronts Roy because he failed to show up at the night club for his first day of work. She leaves when he finds her attempts to be charity, and is subsequently robbed by three men. Roy comes to her rescue, but gets stabbed in the process.
The story goes back to Oliver, who breaks Helena out of jail so she won’t reveal his identity.
She then hunts down Felicity to help her find her father, and she attempts to kill him, but Oliver stops her in a fight. However, McKenna shows up, and Helena shoots her. Helena escapes, and McKenna is hospitalized. McKenna decides to leave to live with her sister because she was shot in her leg, and needed physical rehab. This ended her relationship with Oliver.
The story moved to detective Lance and Laurel coming together to hear what Dinah, Laurel’s mother has to say about Sara’s possible survival. This is one of the first times that Laurel had seen her parents in the same room.
The story moves to a flashback to the island. Oliver and Slade stole the circuit board from the gigantic missile machine, and offered it back in a trade for the plane off the island.
These episodes were eventful, and the action of the plot is rising, however, by this point, I had trouble figuring out where the plot was going. There were multiple villains that just kept getting defeated, without a few main villains that held a clear goal.
However, the attack scenes on Merlyn and the return of Helena were strong enough to temporarily make me forget this.