Almost Afraid of the Walking Dead 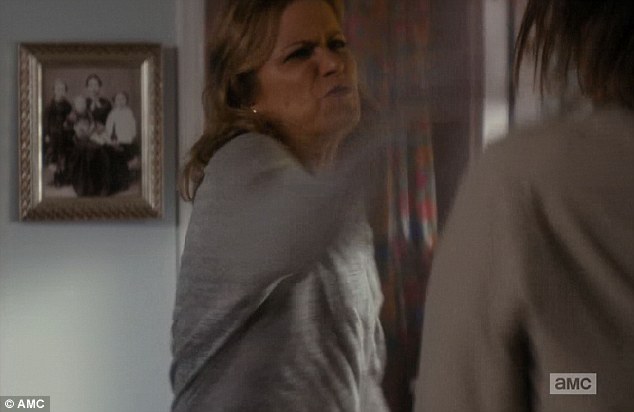 This episode opens with everyone inside of the barbershop discussing how to escape. They feel a wall start to heat up and hear an alarm. They realize that the mob has set the store next door on fire. The group escapes directly through the front door, and head towards Travis’ truck. However, along the way, scaffolding falls on Griselda, the barbershop owner’s wife. It injures her foot, and in the attempt to drive her to the hospital, they realize their path has been blocked.

They split up, and Travis sends Madison, Nick and Alicia to Madison’s house instead. In search of weaponry, Nick and Alicia enter the neighbor’s house. They find a shotgun, but accidentally leave without the shells, because they’re idiots. They get the shells, but get attacked by their close neighbor’s altered corpse, Susan. They leave some of the shells behind, and reunite with the remainder of the group, as they have finally arrived. Travis gets attacked by a former neighbor who has turned into a zombie. Daniel kills the reanimated corpse. All three groups decide to remain in the house for the night, and decide their individual fates in the morning.

Liza, who is a nurse, looks at Griselda’s foot, and does what she can to alleviate the pain, but states that without the assistance of a doctor, she will die. Meanwhile, Ofelia tells her father that she believes they should stay with Travis. Daniel believes that they should go their separate ways, and find their cousins to stay with instead. Before anyone can depart the next day, however, the National Guard enters and quarantines the entire block. Travis is under the impression that everything will be ok, but Daniel in certain if the contrary.

The military has decided to make the area a safe zone, and the next episode opens a few days later, as everyone attempts to resume their normal lives. Madison is feeling increased stress from her home being overcrowded, and Travis’ absence, as he helps other civilians adjust to the militaristic change.

Chris is on a rooftop, filming the events after the downfall, of society, and he notices a flashing light in an area that the National Guard claimed they had already cleared. He shows the video to Madison and Travis, but Travis doesn’t believe him.

Nick and Madison fight over who needs the medicine more: Nick for is withdrawal, or Griselda for her pain. Madison rations the medicine, but Nick is unhappy with his new dosage, so he hides under the bed of an injured man and injects himself with the man’s IV.

The narrative moves back to Madison, who believed Chris and his theories on living people being in the dead zone. She signals them, and they return a message, so she escapes through the National Guard’s fence in search of answers. She finds they bodies of the reanimated that have been put down, but she also finds the bodies of those who had clearly never had the chance to turn. She had discovered evidence of the National Guard killing regular people.

Travis was helping a man who lost his wife, and wasn’t doing well, but the man was taken away under mysterious circumstances. Liza was also helping in the field, but medically, even though she is not a nurse.

Madison then finds Nick looking for drugs in random cabinets throughout the house. Madison finds him, and after a brief silence, she fucks him up! She was going through too much, and had put in too much effort to see him abusing drugs again.

The story shifts to Madison and Daniel, having a discussion about Daniel’s experience in his home country. The sick had been taken away right in front of his eyes under the same mysterious circumstances, with government officials claiming people would be receiving medical care. He later found them in a river, all dead when he went fishing.

National Guard takes Griselda for medical care, Sparking Daniel’s intuition on what they may do to her. However, they read Nick’s name off of a list as one of the people that was supposed to be picked up for drug abuse. The family protest his capture, and the National Guard fight them until they have captured the two they needed.

Travis goes to the roof to see them off, and sees a signal from the dead zone with his own eyes.

The third episode was very good in terms of moving the plot, but the fourth is what moves an audience. I enjoyed when Nick finally got slapped for his garbage, as if no one else has problems. Shortly after the beginning of the series, he became nothing more than a detriment to he group. Madison continues to be a powerful figure in the group, and I gained a new respect for Daniel after his story. His familiarity with the events reminded me of the donkey from “Animal Farm”. I’m just hoping he takes an active role in stopping the negatives he sees.