Pissed Off: A Christmas Story 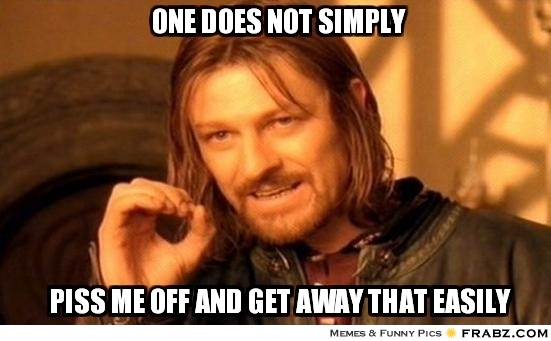 This column will be far different than my standard, because for the first time in a long while, one of my friends has gotten under my skin. This one issue has lead to another, and if I don’t write this out in some form of order, I am literally going to die.

The end of August is always an expensive time of year for me. My birthday is August 24, I have a friend named Nicholas, whose birthday is August 31, and a friend named Brian, whose birthday is September 5. We have a third friend named Michael, born December 31, so he is someone that doesn’t make the end of summer more difficult. Buying consecutive gifts is typically difficult in terms of coming up with a concept, and actually having the money. This year, however, I saved up in advance, and was financially prepared.

Nicholas’ birthday arrives, but I couldn’t order the gift just yet, because my computer was deciding to do whatever it wanted for a while. Nicholas was fine with that, and was in no rush to get his gift.

Brian’s birthday arrives, and we go to his house for a party, which was just the four of us hanging out and eating cake. My computer was fine after I restarted it, which I realized I didn’t even try to do, so I was able to order the gifts for Nicholas and Brian a day before Brian’s birthday. Delivery would take about a week, and then the gifts would be in around the eleventh or twelfth of the month. However, I get a text on September eighth from Brian.

“When did you order mine and Nicholas’ gifts?”

This, at least in my mind, became,

Now thus far, I’ve told this story in chronological order. At no point did I mention getting my gift, now did I? That would be because I still didn’t get one. My birthday was first, and I got nothing, so why he would ask about the status of his gift before I got mine is beyond me. The argument may rise that he didn’t have a job at the time, but in theory, he doesn’t go to school, and he doesn’t pay rent, so when he did have a job, nothing would stop him from saving up for Nicholas and I. The money didn’t fall out of my butt, so I had to save up for them. I also wondered why he quit his job, then decided to tell me that he would get me anything at all. If at any time he couldn’t get me anything, he could have just told me, because it makes some degree of sense. I’m fine with getting nothing, but what was not acceptable was being hassled for his gift when I was suddenly getting nothing.

I asked Nicholas if I was imagining things about the context of what he said. Nicholas agreed that it was pretty messed up. Even my mom agreed, and said that I shouldn’t give him the gift unless it was an exchange; mine for his. A good idea, but I wouldn’t do it for some reason.

The gifts come in, and I give Nicholas his as soon as I had a day off, but I held it from Brian for about eight days. I was about to send it back, but Nicholas recommended that I give him the gift because it was in the way, and every time I looked at it, I would be agitated again. I finally gave him the gift and didn’t mention my gift for sneaky purposes. I wanted to wait until Christmas Eve. That would provide four months exactly for him to give me something, and it would decide if I get him anything for Christmas.

Now, Nicholas and Michael didn’t get me anything either, but at no point did they ask where their gifts were. Michael couldn’t, because his birthday is in December, but Nicholas had the option to do the same thing, and never did.

I got over this whole thing, and didn’t think about it for the month of October at all, but recently, I thought about it again because Christmas is coming up. Michael, our December-born friend, is an unintentional big mouth. I have absolutely no idea how to give Michael and Nicholas a gift without Michael accidentally telling Brian that I got them something. Here, I have reached a fork in the road. I don’t want to get nothing for Michael, because that would be punishing him for Brian’s bullshit. I also don’t want to be a mature individual and give Brian anything, because that’s not who I am. I have no idea what I’m doing about this, but maybe I’ll figure it out it time.