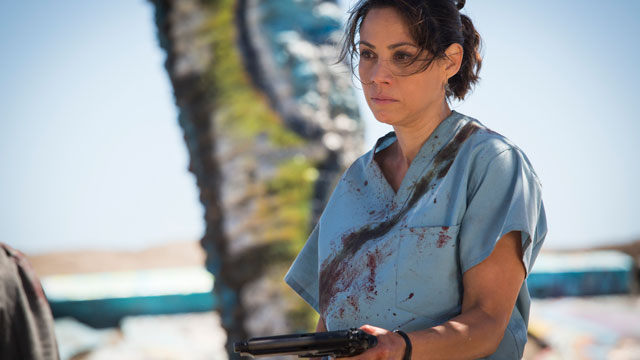 The fifth episode opens with Nick, having been thrown in a cell after the previous episode. Guardsmen attempt to take him away because of fever symptoms, but his cellmate, Strand, bribes the guards to leave him, as Strand knows what happens to those who are taken away.

The story shifts to Liza, who is helping patients in the same facility that Nick is being held in.

Back at the home base, Ofelia was angered about her mother being taken away, so she brought bottles to the gate that the military had at the head of their base, and threw the glass at the gate. Adams calmed her down, and brought her back home.

Daniel decided to capture Adams shortly after the glass incident, and he kept Adams in the basement of their house, torturing him in search of information on his wife’s location. In the recordings over Adams’ radio, Daniel kept hearing the word “Cobalt”, and asked Adams what it meant. They discovered that it was a cleansing operation, and that the military planned on killing all of the residents of the base.

The military planned to evacuate, but they were followed by the family, because Adams mentioned that when the military escapes, they will be heading back to the base where Nick and Griselda are being held.

Griselda died previously from shock, and Liza had already shot her in the head so she wouldn’t reanimate.

The next episode opens with the family leaving before Cobalt can initiate. Adams stresses the importance of keeping him alive because he is the one who can guide them to Nick and Griselda, as they didn’t know Griselda had died. Adams informs Travis that once they have the information, Daniel will likely kill him, and Travis, being kind, releases him.

They head to the National Guard headquarters, and Daniel walked to the gate with a hoard of walkers behind him, distracting the guards, so everyone can get inside. Travis, Madison, Daniel, and Ofelia headed inside the base, leaving Alicia and Chris to guard the vehicles. Nick and Strand broke free during the distraction, and moved on towards an exit. Shortly after they leave, the family arrived, looking for them, while releasing other cellmates. The cellmates tell them where Nick and Strand went, and they reunite. They try to escape through the medical lab, where they encountered the dead and narrowly escape.

They encountered the doctor Liza worked with, and she left them an escape route. In the parking lot, they all met with Chris and Alicia, ready to escape, however, Adams arrived with a gun. He aimed at Daniel, but for some reason, he shot Ofelia, and was attacked after by Travis. Strand led the group to his seaside mansion, where he intended to leave on his yacht. Later, on the beach, Liza revealed that she was bitten in the medical lab during the escape attempt. Liza requested that Madison shot her, but Madison couldn’t bring herself to do it. Travis came along, and after a long discussion, Travis shot her before she could turn. Hearing the shot, everyone ran to the beach, and Chris saw his mother’s body. The group was crying at the loss of Liza, and the season came to a close.

I was impressed by the series overall. There were quite a few things that were done well. One of them was killing a central character. It is unfortunate that one has to die, but the idea of every character making it to the end of a difficult ordeal perfectly intact is unreasonable. I will say that there were a few things that didn’t work well. For example, when Adams came out of nowhere with his gun, he aimed at Daniel, but decided to shoot Ofelia… his previous love interest. I don’t know why. They didn’t even end their relationship with anger, but he shot her in the arm. It was funny, but still. Nick’s character didn’t really develop over time, but they gave a decent reason, stating that Nick felt as if he was always in this kind of world, and was ahead of everyone else. I disagree, because in my opinion, the adults, Travis, Liza and Madison, have the most control over their surroundings. Alicia was just kind of there. The plot leaves me wondering where they plan to go next because Chris has to move on without his mother. The season wrapped up very well with entertaining ideas, but I do wonder what problems they would ever face, if they never leave the mansion.