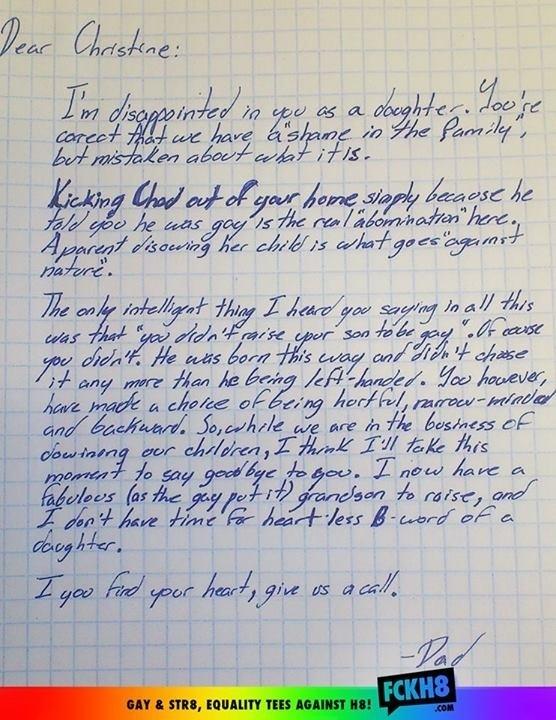 The campaign FCKH8 recently released a photo on their Facebook of a letter a father wrote to his daughter after she kicks her son out of her house after he told her he was gay. The father made it clear that he disagrees with her decision and actions and described what she did as “the real abomination”. In the letter he says that disowning her child was against nature and agreed that she didn’t raised him to be gay but that he was simply born that way. At the end of the letter he gives her a taste of her own medicine and claims to disown her for being narrow minded and stated that he planned to raise her gay son. OUCH! That must have burned.

Of course with the things we find in the Internet everyday there are a lot of skeptics on weather the letter is real or not. The FCKH8 campaigns Facebook stated that they receive photo submissions all the time and that people can submit photos if they want to so it is still unclear if weather we should believe it is real. The letter is sighed as dad and has no physical links to it but the positive feedback from the letter is a prime example on how media can influence people. Gay Americans have faced terrible obstacles trying to receive the same rights as straight Americans. But there are still groups of people who do not agree with the changes in the laws. The letter might be read by a young gay teenager who would use it as motivation to be who they are and except him/her self.  So although it is a high chance that the letter isn’t real, it can be used as a form of motivation for change and acceptance.

I’m disappointed in you as a daughter. You’re correct that we have a “shame in the family”, but mistaken about what it is.

Kicking Chad out of your home simply because he told you he was gay is the real “abomination” here. A parent disowning her child is what goes “against nature”.

The only intelligent thing I heard you saying in all this was that “you didn’t raise your son to be gay”. Of course you didn’t. He was born this way and didn’t chase it any more than he being left-handed.

You however, have made a choice of being hurtful, narrow-minded and backward. So, while we are in the business of disowning our children, I think I’ll take this moment to say goodbye to you. I now have a fabulous (as the gays put it) grandson to raise, and I don’t have time for heart-less B-word of a daughter.

If you find your heart, give us a call