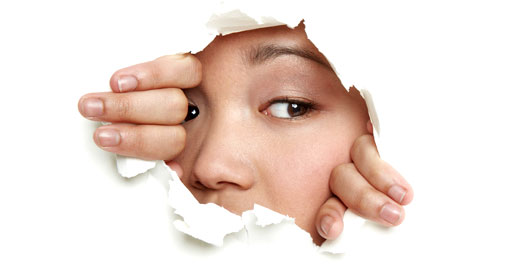 I was the mouse surrounded by the wolves, only when I was with my friends and we were alone did I transform into a parrot. My lips use to feel like it had crazy glue on it, hard for me to open it and speak my thoughts.

The stares of people intensified the more I walked into strange grounds or even grounds I was accustom too. It felt like they were sucking me in with their eyes. Large crowds just made me very nervous. My palms dripped of sweat many times. My nails bitten so low that it was painful but I just did not know how to stop it. It made me feel a little better but not enough to be brave.

I was sixteen years old.  I would never be in the running for a Cinderella role. My height was average. I had always been awkward and shy. I did not like anyone close to me, not even my friends. I jumped anytime someone touched me or came too much in my space. My hugs was probably the weirdest ones out there.

I think the reason I was shy from a very young girl because my father didn’t want to do a lot of things or go much places. My stepmom always blamed him for treating me like baby and for making me act so shy.

But who knew the giant boy that walked into my Caribbean history class would change all of that.

I remember the first day of 11th grade this boy walked into class thirty minutes late and smiling as if he was proud of being late. I recalled thinking that could never be me. I thought it was very embarrassing to be late especially on the first day of class. He also had in earrings, which was something the school did not condone on boys.

“Boy, do you belong wearing that in your ears?” the teacher scolded at him.

That was even more humiliating to me but he smiled the whole time as if it did not bother me. I tried to be the first one to class all the time so I could watch people enter not the other way around.

His name was Jevante. He was in the same grade as me and I had never seen him before. Or I probably just never remembered his face. He was tall around 6’4. He had deep dimples like a well. He was slim but was not buff and did not have a gym body.  He was handsome though, he had something that called the girls to him. He decided to take a seat in my group. I tried not to look at him but he smiled at me though. He loved smiling; it was too much for me.

We had to pick a group leader and they volunteered me. I rejected the offers but they all said they were not going to do it. Jevante was the first to pick me to do the job.  I said yes after a while because our teacher was waiting for our answer. I did not like being a leader, even though my alter ego was dying to come out and run the show, it just didn’t know how to escape my shy body.

It was so hard for me to stand up and talk for the group. I did not mind doing the work but it was the presenting or being the representative that bothered me. I hated all eyes to be on me. I did not like the attention and I just felt everyone was judging me. I was very insecure.

The more I bonded with Andre and the rest of the group the more comfortable I got. Andre had a way of making someone very comfortable through his personality, jokes, and laughter.  Some of his jokes were corny though, but is how he said that made it funny. He said whatever was on his mind and his confidence level was high, I think that is why I was attracted to him. He was the opposite of me, a person I dreamed of becoming.

We switched numbers and talked a lot over the phone. In text and over the phone I said whatever is on my mind. It took me couple of weeks to agree to hang out with him outside of class. When I decided to, I could not look him in eyes and did not talk as much as I did on the phone. He use to laugh at my shyness.

“I find your shyness cute, you have a lot of mouth over the phone but in person you’re mum. You’re scared of me” he would brag.

He also took it as a challenge to see if could break me out of it.

After that, it took me like two months before I could look him in his eyes without being scared or nervous. He did things that made me drop shells every time we hung out. I got more comfortable with him the more we hung out.

Jevante was well-known in school so with dating him came meeting people and it was hard at first. I hated the attention and the nicknames they would give me.

After months of hearing them, I kind of got used to it. I realize I was getting less and less shy, and started being social. They all acted nice, I realize socializing wasn’t so bad. It took a long time to fully get used to it. It was still hard for me to walk up the ramps and different areas alone.

It was still a struggle for me to presenting each of my classes. My classmates use to laugh at me but not in a mean way.

I remember my cousin, who was eight years old had to get a soda and cake for me at a party because I was just too scared to get it and wanted to stay in the corner. My stepmother, Eby, was so mad at me.

“Isn’t it embarrassing that your little cousin is not scared to go get the cake but you are?” she said in an annoyed and mad tone.

It was very embarrassing for me but they just did not understand how hard it was for me.

That was one of the times I really use to think about how I can change to be the confident person that I want to be.

Jevante had a lot of patience with me. He stuck with me through everything. He gave me courage.

I remember our first kiss was so awkward and weird. I was so nervous and did not know what to do. He tried to help but I had to be the worst kisser in the world. I felt embarrassed but he reassured me it was ok. Before him, I never dated anyone, so I was not accustom to certain things. I did text people or talk over the phone but never hung out with people unless they were my close friends.  He taught me to loosen up and let go of myself.

This lesson taught me to stop overthinking everything.

It took me until 12th grade to really overcome my shyness. I remember I got so bold that I decided to do model in a school show. Everyone was so shocked but I did it and had a lot of fun doing it. I didn’t understand how someone had the power to make let down my guard, make me open up, and become more confident. Everyone that was close to me noticed a difference. It didn’t happen overnight, but day by day.

The reason I am a journalism major is because I love read and write.  I probably would have never did this major if I didn’t get encouragement from my ex. He showed me how to stand up for myself and do what makes me happy. He use to tell me don’t let others determine your future.

Don’t get me wrong our relationship was not perfect, I thought it was at first. Some parts of him had changed. Our relationship had ended after awhile.

I am sure a million other people probably felt like that at least once in their life; sad, lonely, heartbroken, and the list goes on. I won’t bore you with the cliché heartbroken story.   I just wanted to let you know that pain change me for the better. I reach my level of confidence and bravery after that relationship. I became the strong woman I always wanted to be at that point in my life. It was the  perfect time to move away to college and be away from everyone I knew.

He was my first everything and he broke my heart, but he gave the best gift anyone could have given me; confidence to overcome my shyness.

I feel being shy is one of the scariest feelings out there. It is very hard for some to overcome but it is very possible to overcome. Shyness keeps people from pursuing their dreams but once they overcome it, it fascinating to see what type of person that has been hiding on the inside all along.

I went from being a worm to a lion.

“I learned that courage was not the absence of fear, but the triumph over it. The brave man is not he who does feel afraid, but who conquers that fear” said Nelson Mandela.