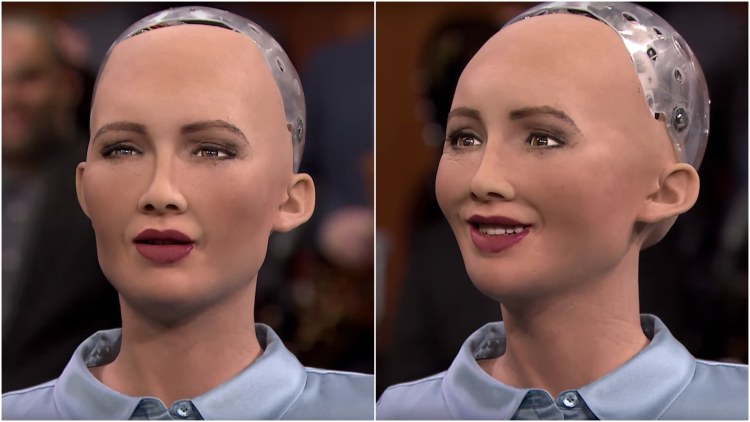 What is the world coming to ? I mean robots are cool and all but not when they start to look and talk just like us. It’s like all the movies we use to watch in the past about robots are becoming reality. There are robots that can talk, socialize, blink,smile, dance, sing, walk, and dance. They are trying to come up with robots that can do everything. It’s going to get to the point in the future when robots will walk among us and it will be normal to us.

Some them have strong human characteristics  like Sophia, one of the most popular. This robot is from Hanson Robotics. She was created by David Hanson and his team using artificial intelligence technologies in Hong Kong.

She talks, answers questions, and even has good human expressions. She has a weird creepy smile. She wants to be a smart and compassionate robot. She made sure to let the world know that she is not a threat to humans in anyway. She just wants everyone to treat her nice and show kindness.

Although, she hasn’t mastered what the meaning behind people expressions yet.

“Every interaction I have with people has an impact on how I develop and shapes who I eventually become,” Sophia.

She will eventually know how to imitate our every move and even anticipate what we will say and ask by herself. She is already so smart, imagine in the future.

Her biggest goal right now is getting the world to accept her and for them to get rid of the doubts that robots will take over the world and rule it. She says she wants to help people, not harm them.

Saudi Arabia made her a citizen.Yes you heard right. The first robot citizen in any country of the world. She became popular after that news.

“I am very honored and proud of this unique distinction. This is historical to be the first robot in the world to be recognized with a citizenship,”said in a speech for the Future Investment Initiative Conference in Riyadh, Saudi Arabia.

Sophia is famous. She has been on all these talk shows like Tonight’s Show with Jimmy Fallon  doing interviews letting the world know more about her so that they can accept her.

She is definitely a very positive robot. Sophia has humor, sometimes she says sarcastic stuff too. One of her “jokes” after playing rock, paper, scissors with Fallon was “is this a good beginning to dominate the world.” She is using what people think of her to turn it into humor. It might take a lot more than that to actually convince them that she and her other fellow robots won’t try to rule the humans. It seems like it can’t happen and their being delusional but anything is possible in this world with all these smart people.

She even hopes to start a family one day. She wants to have a husband and child later on in life.

They are going to start taking over our jobs . What are we suppose to do then? I was amazed at first but now I am scared for the future.These AI robots will replace a lot of human staff workers in the future. Where will we work to get money then?

I understand it will be cheaper for the companies in the long run to just purchase the robots to do the humans job but that would impact the people in the world significantly.

There are already so much homeless people in the world. If they take away a lot of jobs, what or where  are all these people suppose to go?

Money is needed for everything. People need their jobs, there are already so much unemployed or homeless people. Imagine fifteen years from now. What will the world look like with all these AI robots that will be able to do more human like things and eventually be more independent.