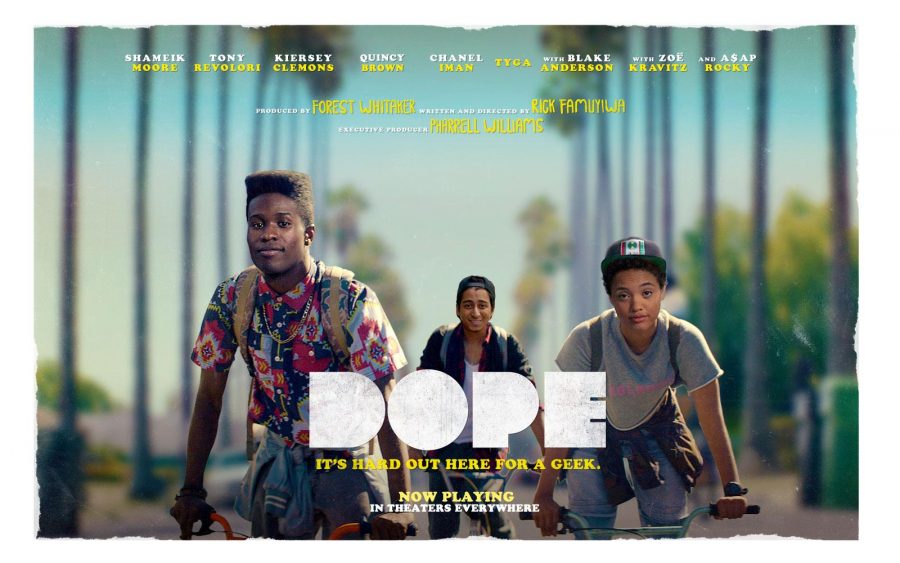 For the past few weeks I kept hearing nothing but good things about the movie dope. I had no idea what it was until I looked on Netflix and there it was. I put off watching it for a long time being that my boyfriend told me it was a good movie. Movies that are good to him I personally don’t like and vice versa.

Let’s get back to the movie “Dope.” Malcom who is the main character has to best friends named Diggy and Jib. They are all from the same neighborhood in Los Angeles.  Malcolm is very smart and wants to attend Harvard University.  His principal tells him that he doesn’t have what it takes in order to do attend there. So he has him meet with a man who went to Harvard and has what it takes to help him get into the school.

Everyday they ride their bikes home and get chased on their way.  One day on their way home Malcolm met the local drug dealer named Dom. He takes Malcolm under his wing and invited him to his party.

Although Malcolm and his friends are under aged Dom makes sure they get in. Malcolm and his friends are “geeks” at their school so they don’t fit in.  When Dom places his drugs in Malcolm’s bag he then has to figure out a way to sell it and get the money. He has to meet with AJ who is the man that will show him what it takes to get into Harvard. AJ ends up being Dom’s godfather and gives Malcolm a pep talk which results in him selling the dope and getting the money.

Dom learns a lot of knowledge when it comes to the dope business. Since he and his friends know they don’t have what it takes to sell it on the corner like most people who sell. Instead they made a website that they could sell drugs on. They got help from their other friend so that they could get the ball rolling.

They would bring the drugs to school with them and fix everything up in the school’s science lab. They never got caught being that they were considered good kids.  They would get a pass from the school security anytime the detector went off because they knew they weren’t into that stuff.

When first watching the movie I didn’t understand it. The point of the movie was to show you person A and person B.  Person A is a straight A student. They make good grades do all of their work but they live in the ghetto. Person B also lives in the ghetto but they are a product of their environment.  They sell drugs and run the streets. Both people send in an application for Harvard. They are both asked why they want to go there. The topic of question is would they have been asked that if they were Caucasian.

When I saw this at the end of the movie I finally understood.  To me the point of the movie was to show that things aren’t what they seem. Although people grow up in a certain environment it doesn’t mean that’s who they have to be. Although you are from the ghetto you can better yourself and you don’t have to be a product of your environment.

Where I’m from people always tell me I’m stuck up or I think I’m better than others because I always have my head in my books. That isn’t true. I love where I live don’t get me wrong but I do want to make something of my life. I refuse to sit around and collect checks. I want to work and have my own. Moral of the story is you don’t have to be a product of your environment.