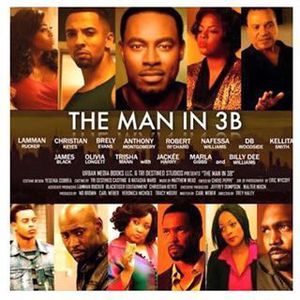 Friday I got home pretty early around about 5 o’clock. My mom was home too. We decided to watch a little television. We turned to Bet and there was a movie on. The movie was “The Man in 3B”. At first I was going to change the channel until my mom was like “OMG I read this book, lets watch this”. I went to get the snacks and we started watching the movie. The main character Daryl just moved into his new apartment in Queens. Everybody talks about him. The crazy part is everyone in the building seems to have it all together but the deeper you get into the movie the more you see they don’t.

Connie and Avery are married. Connie felt as though Avery didn’t find her attractive anymore being that she gained so weight. She goes to Daryl who is into fitness so that he can help her lose weight. Avery comes home and tells Connie that he wants a divorce and she believes it is because of the weight. She tells him that she won’t sign the papers and he tells her he will give her $20,000 to do so. Avery doesn’t like the friendship Daryl built with Connie and tries to put a stop to that.

The next person he meets in the teen next door named Benny. Benny lives with his father who barely has enough time for him. He builds a bond with Daryl trying to fill the void that he has with his dad. Benny’s dad is dealing with a married woman who is trying to take his mother’s place. His father doesn’t see that so he turns to Daryl for help. While at Daryl’s house he was looking through his things and comes across books on how people can come out to their families.  He thinks that Daryl wants to come out so he starts acting differently towards him. Benny’s father no longer wants him hanging out with Daryl and Benny tells him so. Benny finally admits that he is attracted to the same sex and asks Daryl not to tell. His father snoops through his computer and finds out that the person benny is attracted to is indeed Daryl. Daryl makes his second enemy when the father confronts him and he tells him he needs to accept the fact that his son is attracted to men and be there for him. Benny overhears him and gets upset because he thinks Daryl just outted him to his father. He now makes his third enemy in the building.

Daryl’s ex-girlfriend happens to live in the building also. She is in a new relationship yet finds it hard to be away from Daryl. He is the only one who knows about her cocaine addiction. Whenever her fiancé is around she tries to lie and say that Daryl is pushing up on her when in reality it is her pushing up on him. Of course her fiancé believes her and starts to hate Daryl. He made his fourth enemy.

A murder happens in apartment 3B and Daryl is the one who is expected to be dead. The entire building is taken in for questioning. The ladies who love to sit and gossip in from of the building let the police know about all four of his enemies and Benny’s father is the one who is taken down for murder. The thing is Daryl isn’t the one dead its Connie’s husband Avery. She killed him in self-defense and set the apartment on fire. She took Daryl’s necklace to make it seem like it was him. She sent Daryl to Jamaica to make it seem as though he was really gone. She later meets him there and they start over together.