Cries In The Dark 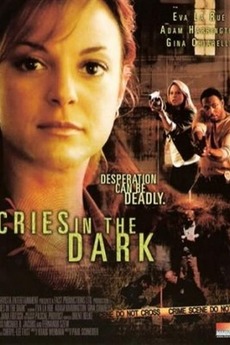 Lifetime has some good movies especially if you’re home on a Saturday night. One night I was home and I stumbled upon a lifetime movie. “Cries in the Dark” is a suspense movie about a woman who has to choose between being a cop and being a sister.

The main character Carrie has been a cop for a few years. The question is what are you supposed to do when the murder you are solving happens to be your own sisters. Carrie and her sister Elle are very close. Carrie has the career while Elle has the home life. She is married and expecting her first child with her husband. Life couldn’t be any better for the two.

Elle’s husband Brad stepped out on their marriage and had a one night stand with a woman named Rosa. Rosa then becomes obsessed with Brad. She finds out about his wife and wants to get rid of her. She later tells Brad that she is pregnant and wants to start a family with him. Brad turns her down and she doesn’t like that.

Every Sunday Elle and Carrie have dinner together. What they didn’t know was that their Sunday dinner would end up being their last. Elle is visiting her doctor and comes across a woman who is too pregnant. They both happen to be having little girls. They tend to always have appointments on the same day.  The woman that she meets turns out to be Rosa. Rosa is so determined to get brad for herself.

Carrie gives Elle a pregnancy book that would explain the things she would go through during her pregnancy. Rosa finally makes her presence known to Elle but doesn’t exactly tell her who she is. She tells Elle that she has seen her around and that they should be friends.

Every appointment that Elle makes Rosa is there coincidently for an appointment also. Rose sees Elle with the pregnancy book and asks her if she could borrow it. Elle tells her it was a gift from her sister so she convinces her to let her borrow it and write her address in it so that she can return it to her.

Elle reluctantly does so and later that night Rosa shows up at her house with a gun pointed at her. Brad comes home looking for his wife and can’t find her so he calls Carrie. Carrie comes over and realizes that Elle has been kidnapped.

The find Elle’s body nearby but the baby isn’t with her. The search now turns to finding the missing baby. It turns out the Rosa took the baby because she wanted a family with Brad. The search continues until they finally locate Rosa and finds the baby in her possession.

They take her in for questioning and realize that she isn’t stable. She wanted to be with Brad so bad that she lied about being pregnant. She found out about Elle and started stalking her. She waiting until she was far enough so that she could take the baby from her and claim her as her own. By the end of the movie the baby is reunited with her family and they try to live happily without Elle.