Wait They Won, Why Are They Rioting? 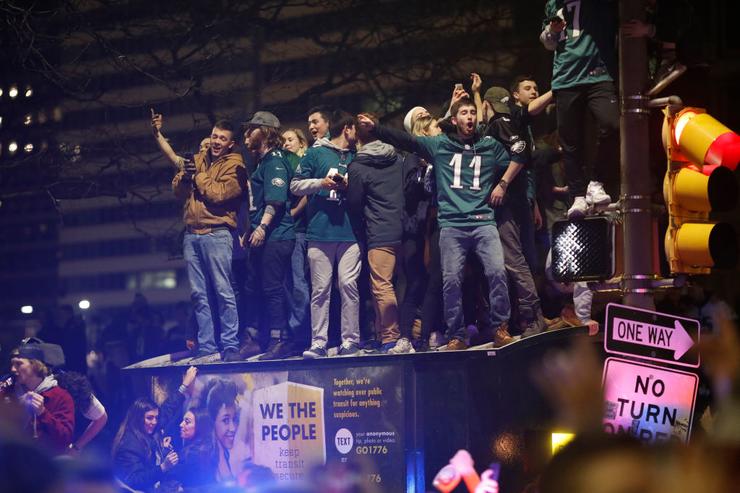 I would like to take a moment to let everyone know that despite Philadelphia’s best efforts, the city is still standing.

Yes, I know it’s sad. I know that Philly really wanted to destroy its arch-rival, and stable living conditions. I know that it gave its best effort, standing on the top of hotel awnings until they collapsed, and destroying the godless convenience stores as well as eating horse feces.

Truly, Eagles fans have shown us all that with the right kind of spirit, and enough beer, we can all prove to God that humanity was a mistake and he should probably choose a different species to be his chosen people.

I nominate the ants since they can’t get drunk.

Now that I got that out of the way, it’s time for me to get real with you all.

Before I and a friend sat down on Sunday night to watch the Super Bowl, I had no idea what the hype was about. I don’t regularly watch football, I don’t follow any teams and the only reason I was watching it was because my friend was into it.

But there was one thing that I did know about that was perfectly encapsulated by a comment made by my friend when I asked him what should be my expectations for this game.

And this fact is what I wanted to talk about, the rioting. Whenever we as a species get together for any sporting event whether it be baseball or football, we somehow find an excuse to torch our own towns.

I know about the alcohol, that whenever you get a group of people together with this substance, then cause a strong emotion to be invoked in this group, something bad is going to happen.

I know that its only a minority of fandoms that do it, because if it were the majority then we would be living in a giant crater with a lone Denny’s in the center.

And guess what, I don’t care.

The fact that every sporting event, that our country cares about on a cultural level, has 50% of a city being burned down is a problem regardless of who’s lighting the CVS on fire.

Regardless of the result of the event, no city should be burned, it just wastes peoples’ tax dollars on repairs. We should be looking at what causes these mass riots as opposed to simply letting them happen and hoping it won’t be that bad.

And I know for a fact it has something to do with the level of emotion that we put into these types of events.

Cause lets all be honest, when was the last time New York got torched after an interpretive dance competition?

(Don’t get any ideas dancers, that was not a suggestion. New Yorkers don’t spend money on taxes for you to wreck the city. Don’t ever try it, you lack the fortitude to resist a mob of angry New Yorkers.)

For some reason some people treat sports teams like they are a religion, that they need to go to war with their neighbors over these events should they side with the “wrong” team.

It isn’t healthy, to say the least, and is a bit off-putting to those of us not into sports to begin with. I knew a guy who had his shirt burned because whenever he wore it the Red Sox would win a game and his family was all Yankees fans.

Yes, they Witch burned a subpar Hawaiian shirt, for the Yankees.

If I ever did anything like this, I would get sent straight to an insane asylum.

But no, for sports it’s just one of those things we have to deal with.

Seriously, folks, it’s a game that children play that business people learned to advertise off of. Value only exists because we put that value in it.

Religion used to be a big thing in most of the country, but over time people made the conscious choice not to follow it, and they seem to live decent lives.

We can get over this people, we just need to stop caring about a game – oh god we will never get over it.

We are competitive to a fault, we turned stacking cups into a competitive sport for Christ’s sake!

You know maybe we should just ban the alcohol, just for the night of the game.

What? That won’t work because beer companies spend millions of dollars on ads? That it would probably tank the economy?

Well what else are we going to do, we got a section of the population that has less self-control than frat boys. Do I need to remind people that there were Eagles fans who willingly ate horse droppings, and that’s the kind of behavior that alcohol creates when mixed with sports?

The answer is clear folks, if a city’s team makes it to the Super Bowl, we got to close the bars down for the night. Because self-control died years ago, and we need to let this minority of a fandom dictate how we conduct our existence.

Think about it, if they drink at home, then they only torch their own house. And when was the last time anyone cared about someone else’s house getting torched?

Out of sight out of mind, that’s what I say whenever I break a glass.

Oh, and I know that someone’s going to say “what about the loss of life”?

To that I say, “what about the CVS worker who has to clean these messes? You never cared about his well being yet you want me to care about an Eagles fan”.

Moral of the story, don’t get into sports kids.