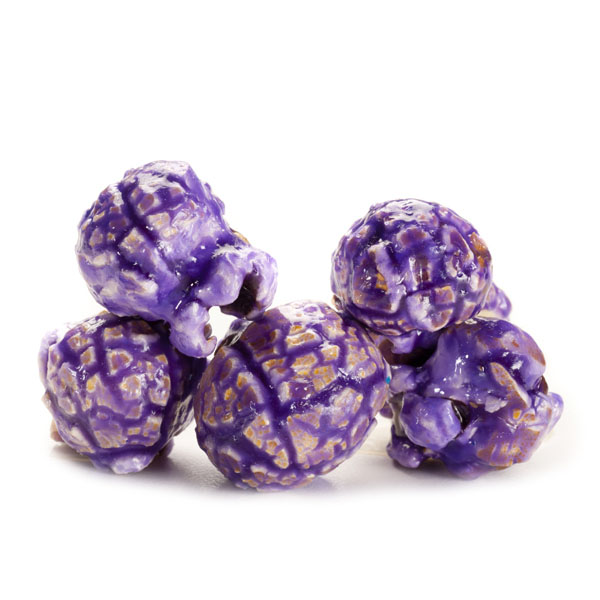 Just because you slap the word “gourmet” onto something doesn’t mean that it becomes a good idea.

Yes, I am aware that the definition of gourmet means “good food”, I’m an English major people, I know how to Google definitions.

But to hell with that definition, it was created by snobby wine-tasters in order for them to maintain some form of relevance over the years. Whatever weight the term once had has been eroded by the march of time and the actions of gullible rich people.

That’s right I said it, gourmet food is the most elitist piece of garbage ever created. It was only created so people could get money out of the social elite, aka the biggest suckers on the planet. And despite all the inventions that mankind has created with the intent of tricking stupid rich people into spending money, gourmet food continues to be the biggest scam.

And I make this claim knowing that I am also living in a period of time that has seen the birth of the FERRARI SEGWAY. Those are two products that were already obnoxious on their own, who was the nimrod who thought merging the two would be a great idea?

They don’t even go any faster than a regular Segway, its cost stems from the god damn brand.

If you own one of these things, you’re an idiot with too much money. In the future I’d recommend just sending it to me, you’ll get the same effect, trust me on this one.

So then why, after lashing out at Segways, am I getting riled up at gourmet food?

Because it invaded the one thing that brings joy to my soul.

There are supposed “gourmet” popcorn companies that are producing types of popcorn that should never exist.

I know last week that I mentioned gourmet popcorn and used it as an example in why we needed some more diverse flavors in stuff like lollipops, but that was before I actually read what flavors were being produced along with the price tag.

(Speaking of last week, I’m still looking for you Mr. “let’s drop popcorn as a flavor”, you weren’t a one-time joke. I’m making a commitment to you. A very long commitment that you probably aren’t ready for, but I am so suck it up.)

Practically 60 god damn dollars for this stuff, and its only for one flavor! And they only seem to sell them in fricken gallons. That’s right, it’s by tin size, but it still doesn’t make any sense since you use gallons to measure liquids, not solids. So, who the hell knows how much popcorn I am truly getting.

WHO MEASURES NON-LIQUIDS IN GALLONS? POPCORN IS A PHYSICAL FOOD, IT SHOULD BE IN POUNDS. MATH CALLED “KINGOFPOP.COM”, IT WANTS YOU TO GO BACK TO FIRST GRADE MATH.

So not only do I not know how much I’m getting, but I might be getting more than I need. And at only one flavor to boot. Yeah, no that’s a rip-off no matter how I slice it.

Oh, but that doesn’t stop them from trying to justify this, oh no, they have a wonderful excuse.

Apparently, you get the popcorn in a metal tin, so now its okay!

I mean sure, the tin will slowly become a waste of space, collecting dust like your ex-wife’s wedding picture in that corner where you keep everything that you’d rather forget about, but look its got a design on it!

Time to take out a mortgage because I’ll take 20.

Oh, and they also give you them in individual bags, but only some flavors and they insist on doing it in bulk. So, not only are you wasting money on more food than you can eat but now we’re going to start poisoning the environment with plastic bags like a Captain Planet villain.

Now let’s move on to those flavors, those wonderful “gourmet” flavors that totally don’t seem weird.

Like for instance, have you ever eaten a grape but was like “I want to look pretentious while eating this”, well guess what they invented grape flavored popcorn. Why not just eat a grape, why go through an overcomplex method to reach an odd response?

Gourmet, you peasants, that’s why.

Oh, and let’s not forget orange and cherry flavored, or key lime pie flavored? Don’t ask me how they managed to infuse a popcorn kernel with an entire pie, just know that they did.

And don’t get me wrong, not every flavor is a horrible idea, only like half seem just stupid. I can look at the other half and say “ya know if it was sold a bit different, I wouldn’t mind getting some”.

But the one thing that I will not let slide is the “gourmet” line that they try to force feed you.

News flash kids, popcorn was made for the masses, it can’t be gourmet. That’s like trying to make McDonalds gourmet, it just doesn’t work. It was made to be cheap, easy to produce and taste good. By trying to make it “gourmet”, you actively go against the first two rules by default and the third one whenever you try to shove a pastry into it.

And that’s the general problem with gourmet, it’s for people who wanna enjoy simple things but still insist on being a level above everyone else.

It’s not a good thing to aim for a “purely gourmet” lifestyle, especially since gourmet is extremely easy to fake.

Did you know most wine tasters, the ones who caused the damn word to be invented in the first place, also talk out of their asses when they critique wine?

It’s true, most of what they say is thirty-four pounds, I’m sorry GALLONS, of pure bull. They can’t tell the difference between cheap boxed wine and authentic, grown in the Alps and blessed by the Buddha wine from some random European country that gets skipped over in high school level world history. It’s all a lie to give the appearance that they can be of use to people.

In fact, a lot of what you eat has a high chance of being faked, there are even books written about this stuff. Since you, or an expert, can’t tell the difference between what’s real and what’s fake, food companies are able to put dumb labels like “gourmet” and “extra virgin” on stuff without much consequence.

So yeah, anything that you eat that claims to be “gourmet” is probably a lie, a marketing stunt designed to make money for mega-corporations and wannabe artisan water makers. If you wanna go ahead and eat it, that’s fine, but don’t act like you’re any better than most common people.

Oh, and if you insist on eating only “gourmet” stuff along with owning a Ferrari Segway, then I’m just going to hate you on principle.