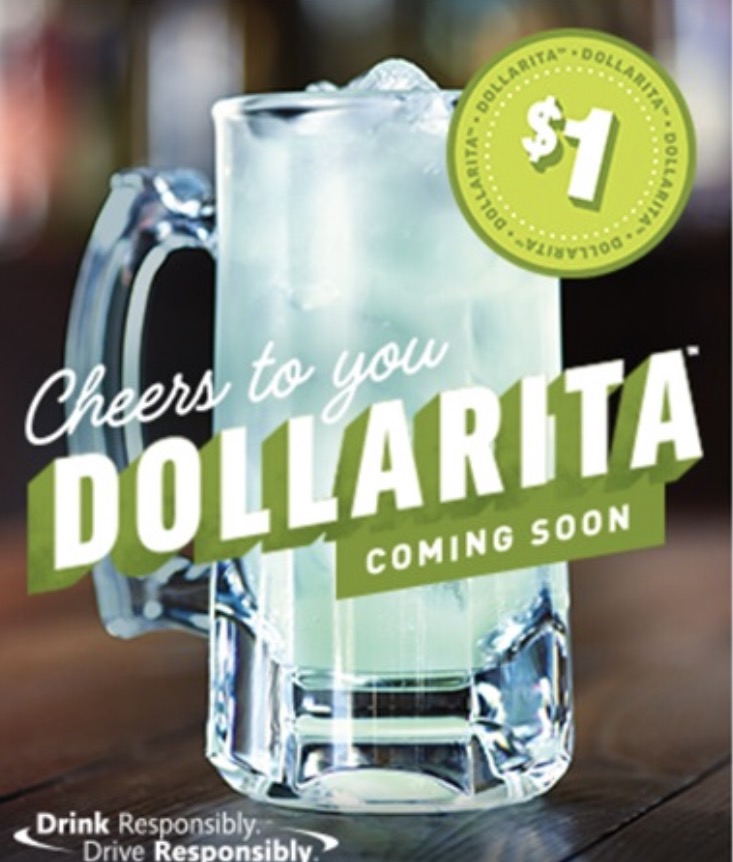 October is finally here and Halloween is rapidly approaching. As we near the 31st of the month we are surrounded by frightening witches, spooky goblins and sexy versions of every occupation known to mankind, there is only one thing that can make this month even scarier, $1 margaritas at Applebee’s served all day long.

“ Our margaritas in October give us a chance to show our guest a little love, giving them a totally unbeatable offer as a gesture of our sincere appreciation for their patronage,” said Patrick Kirk, vice president of beverage innovation at Applebees.

On the first Monday of October I opened the bar at Applebees. Hoping to have an easy-going shift I get my first two customers asking about a ‘Dollarita’. I thought to myself, “$1 for a margarita, that’s insane and a waste of my time”. Just to double check with my manager, it was true. We have $1 dollar margaritas for the entire month of October. My shift went by very smoothly, didn’t get to many guest asking for ‘Dollarita’ so I was hoping not too many people knew about it. I closed the bar Friday night and it was absolutely horrifying. Like any other restaurant on a weeknight there’s a line at the door, but this was insane. Every single customer has come in for a ‘Dollarita’ and nothing else. I worked ten times harder than any of my other shifts and got my tips cut in half based on the low sales due to the cheap drinks. As busy it was, I had to see there and watch my bar for hours with the same faces until closing time sipping there crappy margaritas one sip at a time just to tip me about $3 for there entire time being there.

What’s also horrible about it is, some guest request special margaritas that isn’t from the batch that’s already made. Are you kidding me? You want me to Jose Cuervo and you want me to add a flavor to it? So not we don’t only have customers coming in for these drinks, they also want to pair it with the 2/20 or 2/27 deal. I wondered if all Applebees are participating in this promotion so I did some research. I found out that there’s an Applebees in Texas that is selling margaritas for fifty cents! That’s absolutely unbelievable. I also found out that the Applebees I the city is still charging $14 for there margaritas. So I’m thinking maybe I can get transferred there for a month or just take off until this nightmare is over.

It’s horrifying in two ways: For servers and bartenders, it’s terrifying to see customers clawing at the front door for cheap margaritas as if they’re getting a top shelf drink. For customers, it’s scary because those margaritas are going to suck. Seriously, for a dollar what do you expect? When guest comes in for Applebees happy hour margaritas and complain, why would they expect something better for one that cost a dollar. Seriously, what do you think it’s going to taste like?

Lets talk about what’s inside this margarita. As me and my coworkers were preparing for the shift we made at least four batches of margaritas. Here’s what’s inside: one bottle and a half bottle of tequila, sixteen ounces of lime juice sixteen ounces of bar syrup and top it off water. So there you have it, you’re actually wasting your money. You’re welcome.

So, Applebee’s customers, I want to give you some advice, aim higher. Just because someone in the corporate boardroom of Applebee’s came up with this October promotion doesn’t mean that $1 margaritas are a good idea. That margarita is going to disappoint you more than I disappoint 95% of my customers. However, if you do decide to go to Applebee’s and get trashed on cheap margaritas, think of the servers. They are busting their asses carrying dollar drinks to cheap assholes (no offense) and probably not making much money doing it. If ‘Jack’ and ‘Jill’ each order three margaritas and nothing else, their bill will be about $6.50. A 20% tip would be just $1.30. Your server deserves more than $1.30 for carrying out six drinks and having to witness you trying to force them down. If you’re only spending a dollar a drink, you can at least throw an extra few bucks to your server for dealing with the likes of you all month.